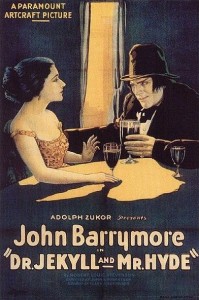 I know I usually summarize the film’s plot before diving into my review, but it seems unnecessary this time given how everyone knows the basic story of Dr. Jekyll and Mr. Hyde. So much so that the story’s the original twist ending has become the selling point: that Dr. Jekyll transforms Mr. Hyde due to his experiments dealing with a person’s good and evil sides. It’s gotten to the point where making a truly faithful adaptation of Robert Louis Stevenson’s tale is all but impossible.

The subject of this review may not have the first cinematic take on the story (it wasn’t even the only one released in 1920), but it was the first feature length version. It’s also notable for being an adaptation of an adaptation given how it’s based on the stage play. Not only does this foreshadow Universal’s method of adapting Dracula and Frankenstein for the screen, but it introduces several plot elements that have turned up in most future versions of the tale that weren’t present in the original (such as Hyde’s abusive “relationship” with a dance hall girl). It also adds in some material that hasn’t popped up in later years, such as a metaphorical sequence with a giant spider and a lengthy segment on the history of a ring with a hidden compartment housing poison. But this is still a fairly faithful adaptation in spite of its additions to the story. I was very surprised to see that the incident where Mr. Hyde casually tramples a child to death made it into the film. It also depicts Mr. Hyde as being mostly human rather than the more monstrous portrayals in later decades. Aside from some clawlike fingers (which were beat Nosferatu to the punch by several years), he is just a loathsome and repulsive person. John Barrymore’s performance is perfect and it’s quite a testament to his acting skills that even the transformation from Jekyll to Hyde relies more on his facial contortions than any makeup or special effects. Like the original literary character, Barrymore’s Hyde is both despicable and yet impossible to ignore. Couple that with the film’s moody atmosphere and you have something that’s easily worth the time of any fan of vintage horror.

Normally I recommend the Kino release of a silent movie that’s in the public domain, but apparently the Kino edition is missing footage that’s available in the Image Entertainment release. It also seems that the Image edition is of slightly lesser image quality and lacks the generous selection of extras Kino has, so it’s hard to pick one over the other.