Music In Costume: MAN…OR ASTRO-MAN? dresses up as The Ventures 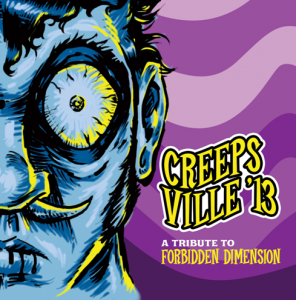 Strange Jason isn’t one to self-promote. That’s why he didn’t make a big deal about Creepsville ’13 here when said album was released last year. As noted in the original press release, the album was created as a tribute to the influential band Forbidden Dimension to celebrate their 25th anniversary.

Started in 1988 by Jackson Phibes, Forbidden Dimension has championed both the horror-monster mentality as well as the independent spirit that has propelled the band, still active, through a quarter-of-a-century. Over the course of five CDs, numerous singles, and side projects, Forbidden Dimension have garnered a world-wide cult following for his scary blend of garage rock, punk, and metal with science fictional, ghoulish story telling. Twenty-five years after the initial Into The Forbidden Dimension release, Creepsville ’13 aims to honor and celebrate the band’s life and accomplishments. With themes ranging from 50’s drive-in sci-fi movies to the cannibal hillbillies living up in the mountains, Forbidden Dimension’s music is the perfect soundtrack for all creeps, ghouls and Tor Johnson enthusiasts.

The full digital album only costs $9.00 and paying a mere $1 more gets you both a physical CD and instant digital download of the album. In fact, we’re so confident you’ll like it that we’ve made a free streaming version available!

Are you one of the people who funded the potato salad guy’s Kickstarter because he wasn’t just another company looking to save a few bucks? Strange Jason payed for this entirely out of pocket without any crowdfunding. Not only that, but the profits are going to a good cause: The Calgary Humane Society. I think that’s more than enough reason to pick up a copy for your next Halloween bash.