Music In Costume: Link Wray dresses up as Neal Hefti 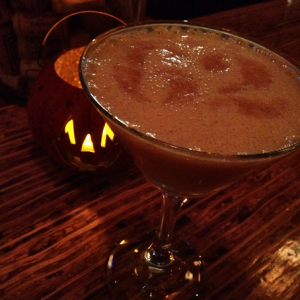 This tasty looking beverage is the “Autumn Harvest” as made by 62 Restaurant in Salem. So they obviously know a thing or two about Halloween beverages and other tasty treats. If a trip to Salem isn’t possible, you can learn how to make one at home (along with several other seasonal cocktails) thanks to Nightclub & Bar Magazine Online.

Everyday is Halloween has a killer recipe for a “Michael Myers Rum Runner.” Sadly there’s no information provided about making the (presumably) marzipan knife. But at least we can drown our sorrows over this with “Screaming Spirits,” “Pumpkin Pie Milkshakes” and a “Creepy Cocktail.” Similarly, Inside The Haunt Industry has recipes for drinks like “Dracula’s Kiss,” “Witch’s Brew,” “Candy Corn,” “Pumpkin Martini,” “Angel of Death” and “Rigor Mortis.” You might also be interested in cocktails like “Bewitched,” “Candy Corn Coolers,” “Ghost-Tini” and “Liquified Ghost.”

Hi-C’s “Ecto Cooler” went off the market in 2007 under the name “Crazy Citrus Cooler,” but that doesn’t mean you can’t drink it anymore. Why? Because Ghostbusters: Chicago Division has figured out a recipe which duplicates both the taste and coloring of this classic drink!

There’s nothing like a hot drink on a cool fall evening. Or morning. Whatever time works for you is a great time for “Mabon Magical Coffee” and “Shrunken Heads In Cider.”

The movie Sharktopus vs. Pteracuda has an official cocktail called “Kraken vs. The World.” Other such promotional drinks include “Kong’s Revenge,” “Piranha,” and “Godzilla” (which was apparently made to promote the release of Godzilla vs. The Smog Monster in America).

If Recipe.com’s “Blue Slime Sipper” is somehow not to you liking, you can try their recipes for “Monster Swamp Punch” and “Ghost Punch.”

Special thanks to 62 Restaurant for use of the image!

Bad Behavior has blocked 918 access attempts in the last 7 days.