Make Your Own Spooky Sound Effects 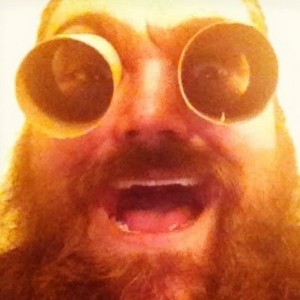 Creep Creepersin. Musician, writer, filmmaker, podcaster and all around fun loving spooky guy. If you haven’t heard of him, then you’re definitely missing out.

Aside from his numerous books and short stories, many of which are in ebook/digital for and can be found on Amazon fairly cheap or even free, Creep has made quite a number of films. Many of which are currently in limbo due to legal reasons beyond his control. His films sometimes spandex out beyond his usual madness and grindhouse type horror. But they definitely have to be seen to be believed. What do you expect from films with titles like Vaginal Holocaust?

With a very busy year that has seen his Twin Peaks-esque book series, Black Star Canyon, reach overwhelming responses and his illustrated children’s like series for adults, Slasherton, a knife wielding murderous paper bag, gain new heights, there is still many projects along the way. Including new music releases from his punk/ blues horror band, Creepersin. A new giallo spoof novel and continuations of on going book series.

Between his Podcast 451 video broadcast, his Giallo Ciao Ciao podcast and his many other projects, Mr. Creepersin took a few minutes to sit down and answer some questions.

KRAIG KHAOS: What was the 1st thing you remember seeing that made you fall in love with the horror genre?

CREEP CREEPERSIN: When I was really little, there used to be some stores in my area that held things like Midnight Madness sales and things. Usually mattress places or furniture or electronics the commercials were different, but they were all kinda the same. They would take a bunch of public domain clips of monsters or creatures. The two biggest ones that made impressions on me were the shot from phantom of the opera where his mask gets pulled off, or the white zombie shot where Bela walks towards the camera or the Nosferatu shoot where he is walking through the doorway or his death scene. That was my first exposure to horror and it freaked me out. They would come on a few times day, especially around Halloween. But that is how i fell in love with classic horror.

KK: We are in full Halloween season. Any favorite Halloween memories?

CC:There are plenty of different ones. There are some great memories about being innocent and being a little kid and the surprise and excitement that people were giving me candy. Then to high school. Halloween night always was a growing experience. There were a lot of “firsts” that would happen on Halloween. Then, being an adult that will jump out of a table or off the roof to scare little kids when they come to my door. Finally, having kids and taking them out. Seeing Halloween through their eyes. having it be new again.

KK: Out of music, writing books and film, which is your favorite medium to work in and why?

CC:Writing books right now is my favorite just because it is the path of least resistance. There are fewer people and fewer steps between me and the fan with the books. With music there is a bit more and film is just ridiculous with it. I love doing all three but I expect I will be doing more writing in general than anything else for the time being.

KK:Your Black Star Canyon book series holds a lot of comparison to Twin Peaks. But with a little more dark vibe. How do you feel about the news of David Lynch bringing back Twin Peaks?

CC:I am so excited. When I first heard, I stayed offline for about a week or so, just because I was afraid that it was a hoax and I didn’t want to hear it. I have been waiting for this for a long time, like many other fans have. On a selfish level, I hope it does really well and that I can get some ripple effect from it, but as a fan, I am just geeked as shit.

KK: Who or what are your biggest influences?

CC:As far as music goes, I would say The Cramps, The Misfits, The Ramones, The Smiths, The Stooges and Christian Death’s Only Theater of Pain album. As far as film, Lynch, Hitchcock, Ed Wood, Roger Corman, Val Lewton, Tod Browning, Kubrick, John Waters. As far as literary, Kurt Vonnegut is my favorite but I also love Hunter S Thompson, William S Burroughs, Bukowski, Kafka, Poe. I think Kafka and Vonnegut can be just as scary, if not more so than King or Koontz. It just depends on what scares you.

KK: Is your daughter old enough to watch your films, listen to your music or read your books? If yes, what does she think?

CC:She has seen a couple of my films. the more tame ones. She has been in quite a few of them. In fact, i did a children’s horror movie last year called Ghost Goggles that she was in too. She isn’t that impressed with me. I’m her dad. LOL. She has listened to my music and wants me to change it almost as soon as it comes on. There are a couple songs she likes and will sing along with, but i don’t let her listen to everything. She hasn’t read my books yet. That’s still a few years off. I would like to write some children’s stories though so we will see.

KK:Our generation seems stuck on the golden age of horror. Why do you think that is?

CC: I think its because there is an innocence to it. It come from a time where we were full of wonder and excitement. Most of us saw these creatures on cartoons or cereal boxes as children. As kids, those might have been the first monsters we ever saw. Before the monsters of real life hit us. Before we found out that our parents weren’t superheroes and before we had to struggle. I think there is a subconscious thing that those creatures take us back to a simpler time that makes us feel warm and fuzzy.

KK: Has there been any recent horror releases that you’ve really enjoyed and would recommend?

CC:Sadly, no. Not because of anything other than I haven’t really been watching anything. I spend whatever down time I have writing. I’m sure there is something good out there. Let me know what it is and I’ll check it out.

KK: A quick game of This or That. I’ll give you 2 choices of similar things, but you can only pick 1. Morticia Addams or Lily Munster?

KK: Danzig or Jerry Only?

KK: Give us your top 3 fave bands, films and books?

KK: What releases do you have coming up that we should be on the look out for?

CC: The Halloween Slasherton book. It’s called Spongesack and Stitchrick. The first book in my vampire mafia miniseries called Black Market Blood Drive: Santa Ana. The second book in my Zombie Alpha series called Zombie Epsilon. My second Shallow Giallo book called Relapse of the Crystal Pubis. All of those will be out before thanksgiving and season three of Black Star Canyon will start in December.

KK: Thank you for doing this for Grave Diggers Local 16.

CC: Thank you man. this was a great interview. Most aren’t this fun :)