Music In Costume: The Mutilators dress up as Michael Jackson

Today, we feature a guest post from Kraig Khaos. Kraig has a reoccuring feature on 6ftplus – Killer Kuts from Kraig Khaos – where he shares a song from a vinyl recording. Kraig has a brand new podcast called Uncommon Interests, where he discusses a wide range of pop culture ranging from the mainstream to deep underground. Today, Kraig recalls a set of stories that had a profound effect on him, stories that would fit in with the current Halloween season.

I remember the first time I ever saw the Scary Stories To Tell In The Dark book. It was at the school book fair when I was 9. I thought the cover looked real cool and spooky. Being poor, I couldn’t afford the book. Or any book for that matter. But the kids who did buy the book kept talking about the cool pictures inside and one or two scary stories they had quickly read while waiting to return to class.

When I got home that day, I was jealous to find that my friend Troy, who lived down the road had purchased the book. I was also overjoyed to hear him tell me that he would bring it to my house and we could have a sleepover and read the stories to each other. So that night, Troy, my older sister Amber and myself sat around on my bedroom floor, reading by flashlight these spooky urban legends and folklore tales to one another and showing each other the accompanying illustrations. I remember shivers down my spine at tales of ghosts on the highway and madmen hiding upstairs.

From that moment on, I was hooked. I borrowed Scary Stories To Tell In The Dark and read it cover to cover several times over the next year. I saved up my money and promised myself that I would buy my own copy at next years book fair, as how our local book store did not have it. At the following year’s book fair, I nearly soiled myself to see that More Scary Stories To Tell In The Dark. As much as I wanted my own copy of the first book, I just couldn’t help but to get the new one. My curiosity to see if this second tome of creepy tales could hold a candle to the first. And luckily, it did. As did the third installment that followed the next year, just before the author’s passing. 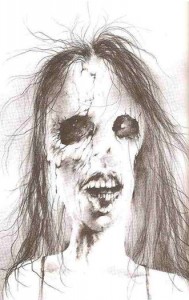 Alvin Schwartz(1927-1992) collected, retold and sometimes reworked the many folklore tales, urban legends and campfire stories found in the Scary Stories book. The author of over 50 titles, many of which were collected ghost stories for children, had a found love for fright and looked upon it with child like wonderment. A sentiment that comes through in his retelling of these old spooky tales. He was an avid believer in the fact that the scariest stories in the world don’t have to be full of blood,guts and sex. And, that old fashioned raconteur stories were equally as chilling as any Hollywood shocker. And his Scary Stories books are a true testament to that.

A part of the success of the Scary Stories trilogy is in part to the haunting surrealist style illustrations on the cover and in the pages of the books. Artist Stephen Gammell(b.1943-) seemingly pulls no punches on his Scary Stories artwork. The eye catching stark black and greys and shading really draws the reader in to whatever horrific nightmare world that is being told by Schwartz.

The reason the Scary Stories series stands out is due to it’s uniqueness. Reintroducing old and forgotten tales of terror and rewrote in a simple yet extremely effective way that helps younger readers understand, but doesn’t dumb down the language. Which is why adults still love this series. Mixed with striking illustrations of ghosts,dead people and ghouls, there is no book more perfect for reading on a stormy night, during the Halloween season, or any time you need a good haunting scare for yourself, or others.

The longevity of the series success has made the books easy to find and fairly cheap. A reprint was done in the mid 90’s with a different illustrator. It didn’t pack nearly as much of a punch as the original and sold poorly.

As of this time, CBS Films has acquired the rights to the Scary Stories series with the intent of making it into a feature film. Let’s hope they don’t screw it up.

Bad Behavior has blocked 1826 access attempts in the last 7 days.