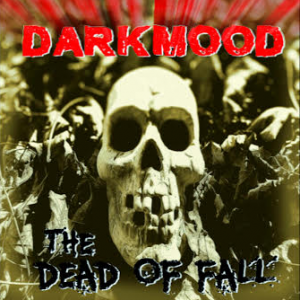 It has been quite a long time since we last heard from Darkmood. After the release of Halloween Descends, the album later went out of print and Steve Montgomery had to balance work on the next album with other projects like SDM and Portrait Black. But the patience of fans has been rewarded with the arrival of The Dead of Fall. Unlike Darkmood’s debut album, this is a concept album rather than a sampler of spooky themes. But the zombie apocalypse theme is used lightly enough so that this album can be used in a wide range of haunted attractions.

Pounding synths open “Outbreak” and are soon followed by varied and creepy piano work. The drum segments (and later use of strings) are a great touch and help build suspense, along with a sense of menace and fear. “Infected” has a THX-style opening buildup, but gets more unstable and unnerving as time goes on. If you need something with soft winds and otherworldly synth sounds, this is the track for you. “Death Bell” has a soft, slow and sneaking piano opening backed up by sinister synth work. Just as the title implies, there are sometimes bell clangs as well. There’s also kind of a dance feel as the beat kicks in. In fact, most of the tracks could be thrown into a party mix without complaint and still be used in haunts. “Quarantine” feels otherworldly right from the start and the synth stings are on full display. The excellent dark piano work adds to the feel. In addition to the synth music break which sounds like something from an 80’s horror movie, you sometimes hear a crying baby, woman screaming, blowing wind, ragged breathing and other effects in the distance. I imagine this being used in scene designed to look like a child’s room. More specifically, in the passage to the boogeyman’s realm found in the open closet. Synths and piano combine in “Bury The Dead” and the varied piano work creates feelings of nervousness and lurking. The wordless vocals are a great touch. While its occasional use vaguely sci-fi touches could allow use in a mad scientist’s lab, it could also work nicely in a ghost scene. Clocking in at over six minutes, “Walkers” is definitely the longest track of the album. I love the soft and steady beat that gradually raises in volume, along with the spooky synths that pop up at times. There’s also eerie chiming and a pounding chase beast later on. There’s so many potential uses for this, but let’s go with a zombie room since that is the theme of the album. A chained up door restraining zombies would be perfect. Especially if you added some fake hands and a hidden motor to move the doors. “Mutation” has a catchy drum beat mixed with synths and windlike effects. It’s perfect for any jungle room.

Stabbing synth tones and a soft beat join with light (but creepy) piano work in “Hordes.” Thanks to the unisex musical moans and some effects which remind me of sharpening knives, I envision this being played in the lair of a mad butcher or in a meat locker. The opening of “A Day So Black” offers medium pounding notes and synth effects combined with wordless male vocals. There’s a beat with a mild “Egyptian” feel later on, but horror stingers and clanking metal change things up. You know that theory about aliens building the pyramids? That’s right, the one based on an unauthorized sequel to The War of the Worlds. Well how about making an area in your haunted attraction based on this and use this particular track? Don’t laugh, it’s been done before. The slow, heavy synth work and effects used in “Pulse” reminds me of skittering and tuning. At least until the fast beat bursts in. There are lots of electrical and sci-fi touches, plus some winds and wails as well. This would be right at home with an alien or laboratory theme. “They’re Coming” has plenty of soft, pounding piano notes with a “We are coming” chant layered underneath. It sometimes takes breaks for synth effects, but always returns. It has a nervous or sneaking feel to it and you could have fun with it by having this play softly and gradually turn up the volume in a room where people are lingering. If your haunt has a tour guide, have them panic and quickly guide people to the next area. If you are operating an outdoor attraction, this would be perfect to use with a hellmouth. “Last Breath” uses lurking synth notes to evoke a breathing feel. This feel is further aided by some breathing sound effects, along with a woman crying and laughing. Try using this with your haunt’s breathing doors or breathing grave, especially if you can synch up the track’s breathing parts to when prop starts. Eerie synth work opens “Epitaph” offers a steady beat, light creepy music and great use of effects. The effects reminded me of wind at some times and ghosts at others. “Dark Waters,” the special bonus track, mixes the sounds of wind and water with plenty of synth touches as well. If you want your haunt to have pirates but don’t want to go through the hassle of making a fake ship, this track can help. Why? Because it implies the ocean so you don’t have to show it. All you need is a room designed to look like it’s from a pirate ship. The track’s somewhat unearthly feel can also let you throw in a sea monster or ghost pirate.

Darkmood’s sophomore release has proven itself well worth the wait. In fact, I actually rank it higher than the first album! I was quite impressed with how so many tracks could be used to dance to (and haunt by) while not being overtly “dance” tracks. No other artist I’ve reviewed has ever pulled off before and this was quite the pleasant surprise. If this sounds like your kind of soundtrack, then you are in luck: it was just released today! I was able to write this thanks to being provided with an early version of the album. I bring this up because I do have a few minor nitpicks about the album and said nitpicks might not even be present on the final version. As much as I loved “Outbreak,” it seemed to end much more abruptly than the other tracks. It also had a somewhat lengthy period of silence at the end before going to the next track. Several other tracks have similar silent periods, but are much shorter than the one following “Outbreak.” But this issue is only really noticeable if you loop those tracks individually. I found listening to the album as a whole helped draw you in and ignore everything but the music. Aside from the bonus track, there’s nothing here that could rule out playing the album in full while handing out candy, so it’s great for casual horror fans and dedicated haunters alike. I’m already looking forward to the next album!

UPDATE: Notic Reign Records has confirmed the issues I noted were errors and assured me corrected versions of the tracks have been uploaded in their place on CD Baby, Bandcamp and other various music download sites.