Today, we share another guest post from Kraig Khaos. Kraig has a reoccuring feature on 6ftplus – Killer Kuts from Kraig Khaos – where he shares a song from a vinyl recording. Kraig has a new podcast called Uncommon Interests, where he discusses a wide range of pop culture ranging from the mainstream to deep underground. Being a vinyl enthusiast, Kraig has a post about the resurgence of horror soundtracks getting released on vinyl records. 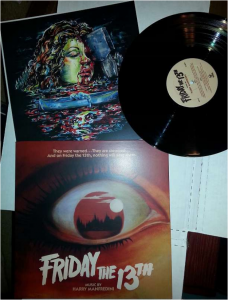 Soundtrack in a film sets a mood. Whether it be a song by a band or a under lining score of a film, the music kind of sets the whole tone. This is especially true when it comes to horror films. Can you imagine the effect of Michael Myers stalking and stabbing someone being the same if “Baby Elephant Walk” was playing in the background? Of course not. And over the years, some horror film scores and their composers stand out among all the others. Names like Fabio Frizzi and Harry Manfredini have become as infamous and celebrated as the directors they worked for and the films they scored.

Unfortunately, for a long time, it was hard to come across good vinyl copies of these soundtracks for films like Cannibal Ferox, City of the Living Dead, Re-Animator or New York Ripper, unless you paid a pretty penny. And even then, it was mostly bootleg copies done by some backdoor record label (this being the case because a lot of soundtracks weren’t released.) After all, a film with a shoe-string budget doesn’t really have too much extra cash lying around to press a couple thousand records to tie in with a movie that may only be released in a few countries before going straight to video.

But thanks to record labels such as Death Waltz Recordings, One Way Static Records and Wax Works Records, there is hope. These labels have been releasing a slew of tremendous soundtracks to some of your favorite horror films of all time. And these guys aren’t just popping a record in a generic sleeve and saying “Here ya go!” They have some of the top artists of today doing new special artwork for the covers. And with new liner notes from the film makers and composers themselves discussing their feelings and ideas about the music, these beautiful pieces of art are truly something special to a collector or fans of a film. And with incentives such as limited number pressings on colored vinyl, art prints and posters included with the record, these soundtracks have become quite the commodity. 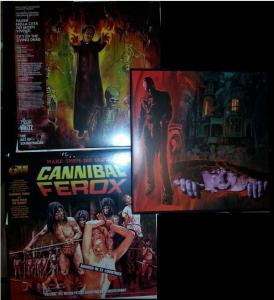 (300 blue vinyl, 200 green vinyl, 500 on black vinyl, etc.), state the incentives (liner notes by director, comes with limited hand numbered art print and poster, etc.), show the cover art and then give a date that the pre-order goes on sale along with the actual release/shipping date of the record. And although they seem to sell out pretty quick, they always seem to do a large run of one color or regular black vinyl for those who show up late to the game but still want a copy. And those large runs of color or black still come with the same packaging and incentive art pieces.

The important thing to remember, though, is the music itself. These companies aren’t just doing releases for any film soundtrack they can get their hands on. They are doing films that the music had a large part in shaping and setting the mood to. So now, you too can own a badass vinyl version of soundtracks to Day of the Dead, Rosemary’s Baby, Re-Animator or House By the Cemetery and many others. They may cost a little more than the average $15 record from your local mom & pop shop. They usually run between $20-$30 depending on whether it’s a double LP, the extras that come with it and all those things. But they never seem to charge more for the limited colored ones than say the regular black vinyl version. They just do a first come first serve type of thing.

So, if you’re into vinyl, soundtracks, or just some beautiful horror art, definitely seek some of these out.