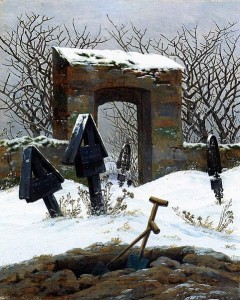 Season’s Bleedings! Like Santa Claus, I’m reaching into my bag of goodies to find the best horrorday treats for you all. And you don’t even have to leave me any cookies!

Fans of H.P. Lovecraft should remember his wonderful Christmas poem “Christmastide,” which was surprisingly free of cosmic horrors and racism. What they might not realize is how they can read his other Christmas poem “Good Saint Nick” on Wikipedia! Not only that, but you can hear special readings of both poems at PoemHunter.com. Those seeking a Lovecraftian Yule celebration should also enjoy Propnomicon’s latest gift guide while others might prefer a Doctor Who gift guide.

Not only does Halloween Forum offer a spooky poem called “The Christmas Witch,” but it also has a tutorial for turning a motorized lawn reindeer into a fearsome wolf. Speaking of holiday hacks, Dave Lowe figured out a way to make a fake maple tree which oozes sap. I’m sure you could modify this to create a bleeding Christmas tree.

Sonia Harris’ free printable superhero snowflakes might seem out of place in this article at first glance. Until you realize how the one for the Punisher depicts skulls and knives. And let’s not forget Stolloween’s zombie snowflakes either!

Looking at Halloween New England’s gallery of spooky Christmas items inspired me to post My Ghoul Friday’s tutorial on making creepy ornaments, along with some papercraft coffins from RavensBlight which can be used to make ornaments.

Despite the name, Home For Halloween has lots of helpful instructions for festive decorations and snacks. Add a little holiday fear to your Christmas village with spooky trees or build prop versions of Jack Skellington and other characters from The Nightmare Before Christmas. You can also learn how to make freaky ornaments and candy cornaments. While you are there, you can also learn how to make “Pumpkin Oatmeal Chocolate Cookies,” “Winter White Red Velvet Fudge (aka Bloody Fudge),” “Pumpkin Pie Cinnamon Rolls,” “Night Owl’s Favorite Gingerbread,” “Jack Skellington’s Sandy Claws Cookies” and some spooktacular hot cocoa.

So it turns out there are The Nightmare Before Christmas versions of Monopoly, Operation, Jenga and two versions of Yahtzee. At least the branded decanter, door knocker, tealight and ornaments make some thematic sense.

If your reading habits are anything like mine, then those short previews on Amazon simply aren’t enough to satisfy your hunger. Wikisource has the surprisingly spooky “Christmas Eve” by Nikolai Gogol …in Russian. I imagine most of those reading this will have to settle for the English language synopsis. Thankfully there is another (and quite lengthy) Christmas tale available for free online: Santa and the Mars King by Lucrece Hudgins Beale. Don’t let the name fool you; this has nothing to do with Santa Claus Conquers The Martians. Although said movie would have been greatly improved if it had Halloween witches show up like they do in the story. You can read the full story (along with the original teaser released prior to the story’s publication) thanks to the Google Newspaper Archive. I also discovered how some versions of the story included free coloring sheets! Here are the sheets for chapters 6, 10, 11, 12, 13, 14, 15 and 18. The archive’s direct linking capabilities leave a lot to be desired, so you might have to scroll around a little to find the coloring parts.

And now for everyone’s favorite part: the free music downloads! Sam Haynes has a limited time free album of creepy Christmas music while Head Injury Theater has another batch of audio oddities ready for you. Killbot Zero’s “Santa Claus Conquers the Martians” is a rockin’ tribute to the cult classic while the Consortium Of Genius want to take you on a “Winter Slay Ride.” Duover has “Krampus Nocturne” (along with many other tracks) available for free, Adam_Rock offers us “The Christmas Chainsaw Massacre” and MorteMcAdaver has a new take on an old classic entitled “We Three Priests of Azathoth.” Hans Maestro Music brings us “Jingle Bones” (in both regular and instrumental editions) while Jonathan Coulton’s “Christmas is Interesting” and “Chiron Beta Prime” are surprisingly catchy downbeat Christmas tunes. He also has the cheery “Podsafe Christmas Song” for those who insist on “normal” and “happy” Christmas music.

Bad Behavior has blocked 928 access attempts in the last 7 days.