Kraig Khaos. Kraig has a reoccuring feature on 6ftplus – Killer Kuts from Kraig Khaos – where he shares a song from a vinyl recording. Kraig has a new podcast called Uncommon Interests, where he discusses a wide range of pop culture ranging from the mainstream to deep underground. 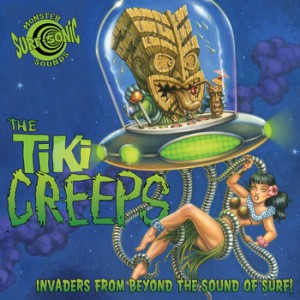 Surf music is a hard genre to break new ground in. People who don’t like surf music generally feel that all surf songs sound the same. People who love surf music generally love the familiar guitar tones and rapid snare drum beat. And instrumental music is a tough genre in which to convey specific ideas. But I’ll be damned if The Tiki Creeps haven’t taken the surf genre and flipped it on it’s ear.

If you dig surf music, then this a band you have to hear. Because Tiki Creeps do that very hard thing of making instrumental music that conveys exactly what it’s supposed to be saying while at the same time, bringing something new to the genre. It’s a little hard to explain, but I’ll try. Because I know just me saying, “Hey! This is awesome. Go listen to it!” isn’t going to make you jump right up and give it a go.

If a 1950’s sci-fi horror film had surf music as the score instead of the usual symphony, then Invaders From Beyond The Sound Of Surf would be it. When you hear a song like “The Crawling Terror!”, the music makes you actually feel like “Yes. THIS song should be titled ‘The Crawling Terror’”. They even soften it up a little with the song “Midnight Stroll” by letting the rhythm carry a smooth sound that you’d imagine would play during a midnight stroll scene in the aforementioned sci-fi horror film.

The Tiki Creeps obviously take a few influences from bands such as Coffin Daggers and Los Straightjackets as well as Dick Dale. But they aren’t afraid to branch out and try new stuff. Imagine what a song would sound like if it were a Mexican surf song. Is Mexican surf a thing? I don’t know, but the song “Mimosa” is exactly what you’d imagine one would sound like.

Invaders From Beyond The Sound of Surf, released in September 2014, is The Tiki Creeps’ first release. Seven songs of surf sonic, monster music madness! I can’t wait to see what they do next. Hopefully they will land on a cool label that will take a chance with them. Because I truly believe this Los Angeles,California band is capable of greatness. They have some shows coming up. So check out their facebook page at www.facebook.com/thetikicreeps for dates. And go to their bandcamp page at www.tikicreeps.bandcamp.com and buy the CD with beautiful artwork by Doug P’Gosh or buy the digital download. And while you’re there, pick up one of their awesome logo tiki mask shirts to let everyone know that YOU are on the cutting edge of great surf sounds. Because in outer space, the surf is ALWAYS up.

Bad Behavior has blocked 838 access attempts in the last 7 days.