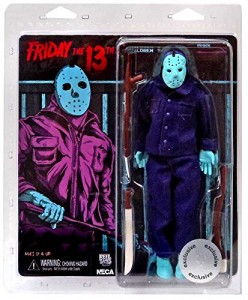 Friday the 13th. A film franchise that has spawned more sequels than Kate Gosselin has kids. Over the years, Jason Voorhees has become quite the marketable character. The developementaly disabled zombified mongoloid has stood as a giant above other famous horror icons of his ilk in the merchandise department. Garnering as many different collectible items as to rival Elvis or the Beatles.So, in honor of the upcoming February Friday the 13th, I thought it would be fun to take a look at just a couple of different Friday the 13th merch items that are available that you might have missed over the years.

Numerous box sets of the films have been released on VHS,DVD and Blu-Ray over the years. Chances are, if you are a die hard fan, you have a few or all of the films already. In 2008 Paramount released an 8 disc box set that included a replica Jason mask and 2 pairs of 3-D glasses for viewing part 3. 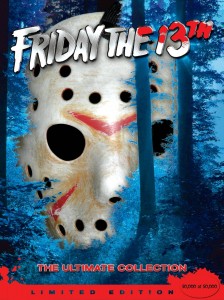 Aside from numerous t-shirt designs, a few of which I have myself, you can find virtually any item of clothing that adornes the hockey mask of our beloved butcher, Jason. From boxers to beanies to neck ties to socks. You can also find Jason earrings ,bracelets,hair barrettes and necklaces through various online stores. This also includes people hand making items on Etsy.

In the early 90’s, a young adult/teen book series written by Eric Morse was started. The main premise of the series was teens going to the Crystal Lake area, someone finding and putting on the Jason mas and a supernatural power then turning that person into a giant hulking Jason Voorhees. The series was short lived and squashed after 4 books. They have never been reprinted but can be found for a pretty penny on Alibris.com and Amazon.

Since then, books about the making of the films by the filmmakers themselves  and more adult oriented novels have been written and seem to stay in print.

Aside from Jason mask prop replicas, a great number of action figures,dolls and statues have been made. Each year seems to bring a new high end statue or first of a kind figure. From 8″ to a giant 24″ figure, there is always something new. From the beautifully sculpted figures of McFarlane Toys to the highly detailed statues from Sideshow Collectibles, you too can have the ultimate homicidal momma’s boy in your home. This past year actually saw the release of a Friday the 13th part 5 “Jason” figure. A figure of the guy who pretended to be Jason in order to murder a bunch of people.Who ever would thought that we’d see the day.

In 1989, Nintendo released a Friday the 13th video game. And although not popular at the time, a 25 year anniversary  saw a slew of merch from the video game. From 2 different action figures to shirts to beanies to a glow in the dark mask. 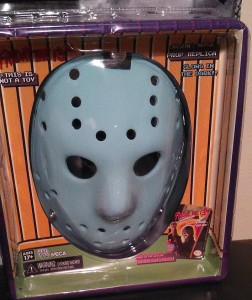 The soundtracks and scores to all the films have been released on various formats over the years. Lasy year Wax Work records released the soundtrack to the original Friday the 13th film of a few different colored vinyl. Including one that looked like blood was swirling around inside the vinyl. It was  released with an exclusive art print by Jacqui Oakley. 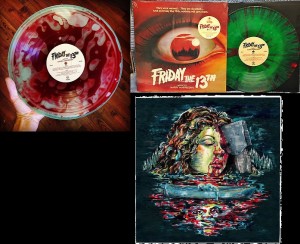 From purses to cups to posters and everything in between, there is no shortage of crazy Friday the 13th merch out there. So why not show your inner horror geek this Friday the 13th? Strap on your replica hockey mask and Property of Camp Crystal Lake shirt and  get your Jason on.