“We shot Phantom at an old studio outside Budapest. Often on the dawn drive through the countryside we would find ourselves behind nineteenth-century oxcarts lit with swinging lanterns making their way to the village market. it was magical and helped get me in character; we weren’t in Kansas anymore.” 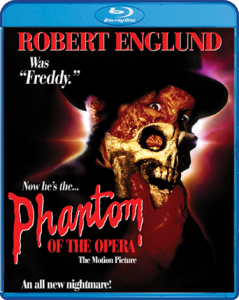 Scream Factory continues to be Horror’s best friend in the Blu-Ray era with a new release. Dread Central posted a review today and I wanted to add a little background from his memoir, Hollywood Monster, that was ghost written by Alan Goldsher, who has ghost written many biographies as well as worked with Tobe Hooper (of Texas Chainsaw Massacre fame) on his novel, Midnite Movie. I reviewed the novel years ago – check it out.

Robert Englund, much like a Bruce Campbell cameo, can often make a garbage movie worthwhile, even when he knows it’s garbage. And there’s probably a reason why Phantom Of The Opera isn’t synonymous with Robert England’s career. Anthony Arrigo of Dread Central had a great write up with the new Blu-Ray release of the movie. I imagine Scream Factory is banking on the top billed star as being a draw, as fans of Robert Englund will probably buy the release just to see him. And you know what – they’re right! Because that’s what I’m going to do.

Before filming began, our director, Dwight Little, and I had several conversations about how I should play the role, and the style of the movie. We decided to think of it as a reimagining, a homage to the classic Hammer Film productions…We wanted to bring a similar sense of class, style and not-so-subtle sexuality to our version of Phantom.

I’d also go pick up Hollywood Monster. It’s not a dense read but you get a little background on Robert England’s career up to 2009. It’s definitely a good companion piece to all the Freddy fanatics out there.  So be sure to pick it up and a copy of PHANTOM OF THE OPERA on Blu-Ray after you read Anthony Arrigo’s full review over at Dead Central.

Bad Behavior has blocked 1637 access attempts in the last 7 days.