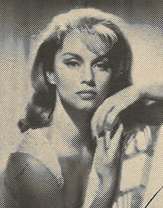 It took three months for Alvin K. Bubis, producer of “The Devil’s Hand,” currently showing at the Leathbridge Theatre, to convince Linda Christian to allow her famous nude statue to appear in the picture.

Filmgoers will recall that this undraped, lifesize, perfect likeness of Miss Christian was the talk of Hollywood several years ago. Tyrone Power, her late husband, commissioned a famous sculptor to do the nude reproduction of his wife for the garden of their home.

Many Hollywood columnists wrote stories on the remarkable statue, and it was the main topic of conversation at every Hollywood party. One of the reasons that Linda objected to the statue being used in “The Devil’s Hand” was that she feared that the furor would start all over again.

However, audiences can be glad that Bubis was able to persuade her to relent. The statue plays an important part in this story about a voodoo worshipping cult operating in the middle of a big city. Linda is the reincarnation of their love goddess, and her nude statue stands in the center of the cult’s strange temple.

Robert Alda co-stars in “The Devil’s Hand,” playing the part of a man lured into the dangerous and deadly set by the beautiful and wicked Miss Christian.

[This post is based around one of many prepared articles included in the pressbook for The Devil’s Hand. With the exception of adding a theater name in order to mimic how this would have looked in an old newspaper, the article has been unchanged. Given the typos and gross inaccuracies about voodoo, leaving this untouched was harder than usual. It’s sad how this was the only article about the film in the pressbook with the most horror connections. To see more, head on over to From Zombos’ Closet.]

Bad Behavior has blocked 889 access attempts in the last 7 days.