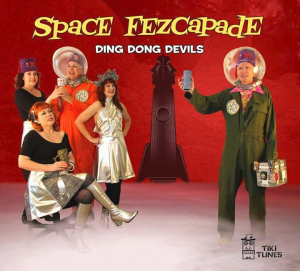 It has been a year since I had last covered the Ding Dong Devils here and the outer space album promised in that last review is now a reality. Hardcore exotica fans will recognize the name and cover art of Space Fezcapade as being a direct reference to Les Baxter’s Space Escapade. But the theme goes far beyond a homage to a classic album. As they note on their official CD Baby page, they draw an interesting connection between cargo cults of the South Pacific, Erich von Däniken’ ancient astronauts claims and 60’s Robinson Crusoe adaptations. With this in mind, let’s jump right into the album itself.

In “Ku Vs. the Space Monster,” a countdown leads to spooky surf track about the Hawaiian god of war battling a creature from beyond the stars. The somewhat militaristic drum beats mesh nicely with the guitar work and given the song an appropriately 60’s monster movie feel. It’s somewhat surprising a movie like this doesn’t actually exist. Japanese tokusatsu was incredibly popular in Hawaii during the 70’s, the same decade which saw a tokusatsu-inspired movie made in Hong Kong called War God that pitted the Chinese god of war against giant alien invaders. Getting back to the album, “Greetings from Crab Nebula Cocktails” is a ukelele-twinged tale of a space bar with strong cocktails and alien clientele with plenty of guiros. “Theme From ‘Mohawk Over the Moon'” has a catchy percussion beat and 60’s organ work and “Voodoo Man” offers old school surfy rock ‘n roll. “Uranian Jerk” shares much of its musical DNA with the previous track, albeit in a heavier and harder way. “The Area 151 Swizzle” is an organ rock-backed recipe for a fictional variant of the 151 Swizzle, which you are instructed not to operate machinery or UFOs after drinking. I love all the alien references and the chorus is a great touch. The low key exotica opening of “Blame It On the Croatoans” gives way to guitars and lyrics about a race of aliens who prepare a rather…unique specialty drink. I seem to detect a 70’s influence, which also appears on other tracks in the album.

“Can You Dance to It On Mars?” features great piano and guitars work while the vocals tell of all the ways people can dance. I love the instrumental interlude. Fast guitars and faster drums drive the surf track “Danger Island,” which is inspired by the recurring segment from the Banana Splits Adventure Hour. serial of the same name. “King Kong” is a surprise cover of an oldie from Tarantula Ghoul and Her Gravediggers! There’s great bouncy guitar work with an occasional dash of cymbals (along with a monkey call). Soft drums and cymbals carry us through an awesome instrumental track in “Marooned On Space Atoll 13.” It has a nice and spacy feel which flows into the next track. Said track, “The Mai Kai,” is musical tribute to a Florida Tiki joint. It sure sold me on visiting if I’m ever in the area and I’m sure it’ll do the same for you. “Tiki Kon” is an amazing outer space jam of guitars and organ. It gets goofy at times, but in a good way. The opening of “Twistin’ Spaceman of Rapa Nui” introduces us to concept of ancient aliens building artifacts like the Moai of Easter Island heads, which launches us into reverby ukelele and guitar goodness with lots of sci-fi woo noises. “Wild Man of Borneo (For Rory)” is lightly rockin’ little ditty named for an old type of sideshow attraction. Thanks getting them to include such a catchy song Rory! The wacky opening organ work of “Hot Pink Astro Teddy” leads to a humorous back and forth between two aliens at a bar. This simply must be heard to be appreciated.

The Ding Dong Devils have hit it out of the park once again. There’s not a single dud or filler track on the album and listeners are sure to play it over and over again. While their first two CDs were packaged in standard jewel cases, this one comes in a three panel digipack featuring artwork on the back by El Gato Gomez. Since I don’t have much else to say about the album, I thought I would share a little discovery with you. It turns out both “Theme From ‘Mohawk Over the Moon'” from this album and “Theme From ‘Belly Dancers of Bali-Bali'” from their debut album are inspired by fictitious films from Gilligan’s Island! I’m guessing the next homage will either be “The Rain Dancers of Rango-Rango” or “Dracula’s Women.”