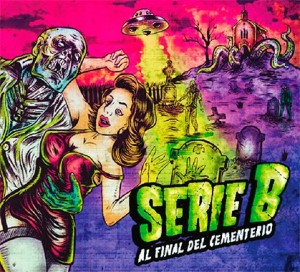 I randomly came across this mexican horror punk band while browsing the internet for something new to listen to. I came across Serie B. Their bio stated that their major influences were Misfits,Balzac and The Ramones. 3 of my favorite bands.

After listening to a few tracks online, I contacted Serie B and purchased their 2012 CD, ” Al Final Del Cemeterio”. Wich I believe translates to , The End of the Cemetery. But don’t quote me. They sent me the CD as well as 2 kick ass posters, a sticker and a Serie B guitar pick. 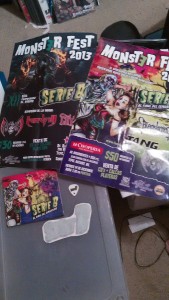 I quickly put the album on my mp3 player ( I know. I’m SO out dated) and have listened to the 10 tracks on here more than a few times.

Serie B wears their influences on their sleeves. You can hear the Balzac type of song structure in songs like “Visiones” ( a highlight of this album) and “Al Final Del Cemeterio”.

Serie B sing in spanish. So I have no idea what they are saying. But I don’t know what Balzac is saying 1/2 the time either, but that doesn’t stop me from loving them or from really enjoying this album. You can hear a Misfits style chorus in “Songre en la Pared”. And  there is  Ramones style downnstrokes all over this album. But not on every song. Wich is nice change of pace from most bands that do this kinda music.

Ultimately, I think that Serie B have something special going on sound wise. There is some excellent guitar work in some of these songs. And I’d love to hear them focus on that stuff and the things going on in “Visiones”. I hope they get more popular and put out another full length soon. In the mean time, I highly recommend you seek this out.