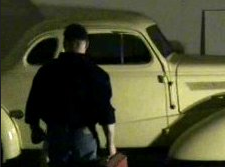 When people discuss the works of Ray O’Bannon, they often focus on his music and paper toys. But this modern Renaissance man of horror has many more demonstrations of his talents available on his website. From artwork to jewelery, short stories to software, he has done just about everything. He has even created numerous short films.

Night Shift details what happens one night when a mechanic attempts to repair a car with a rather sinister reputation. It is one of his longer films, second only to the sci-fi/horror combo that is Scout 17. I highly recommend watching all his horror films (especially Lonely, which is my personal favorite), as they span over numerous styles and moods. They can be serious, funny or even a combination of the two. And they can all be downloaded from the “Theater” section of his website.

But wait, there’s more! Not only can you download a selection of printable sleeves for a DVD-R containing these shorts, but you can also download a papercraft model of the haunted car seen in the titular film! Although the background details given on the car on that page differ from the version given in the film, it still is the same type of vehicle. You can also easily create a soundtrack album for this collection since O’Bannon’s vast library of free music downloads were also used in many of the films.