Support Six Foot Plus By Purchasing A Scarepackage! 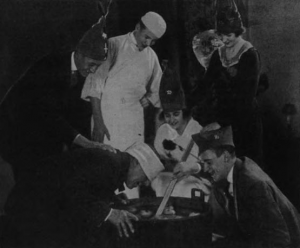 Bobbing for apples might seem like the perfect activity for your next Halloween party, but I highly recommend not doing it. “But Weird Jon,” I can hear some of you saying, “you can’t seriously expect people to stop doing it. It’s a Halloween tradition!” It may be a tradition, but it’s also very unhygienic. Plunging your head into a small tub of water filled with the backwash of other party guests? No thank you! The potential drowning risk makes this especially unsuitable for children. Don’t let the traditional aspect of this game fool you. Snapdragon was once a cherished Halloween tradition and it involved putting treats in a dish filled with alcohol. The dish was set on fire and players had to try snatching up the goodies without getting burned. I’m not kidding! That link also shows another issue with finding good games for a Halloween party. So many sources feature outdated traditions or focus on regular party games without any Halloween connection. You have to dig through a lot of junk before finding worthwhile games like “Shadow Buff.” It’s no wonder so many just stick with apple bobbing. But I’m going to do my best to change all that by compiling a list of much more relevant games for October festivities. Both activities for young and old can be found here and while you can try them at your own discretion, I think you will agree they are much safer than bobbing for apples.

If you really have your heart set on apple games, why not trying hanging them from their stems on strings and have people try to eat them without using their hands? Doughnuts can be hung the same way and have the additional challenge of trying to eat them without it falling apart. Just be sure to have a vacuum cleaner handy if you decide not to lay down some sort of floor covering beforehand.

Pumpkin bowling can be a lot of fun for all ages. I really like the idea of using stacked plastic pumpkin buckets as the pins! That link also has some great ideas for Halloween musical chairs and a storytelling game. I once went to a party where we sat in a circle and had to pull random objects out of a bag. When it got to your turn to add to the spooky story, you had to include the item you pulled out into the tale!

“All Change” (sometimes referred to as “Ghost Run”) is a popular Halloween game for children, but it can also work for older players. Just be sure you have a lot of room and plenty of spare costumes.

My Ghoul Friday’s games “The Crate Escape” and “Head Shot” might seem like kids’ fare to some, but I can assure you they are tons of fun for older players as well. She also has lots of other party games available on her website.

“Spider’s Web” and “The Magic Mirror” are lots of fun for children, as are the “Monster Marble Game” and the “Scooby Doo Maze.”

“Monster Mad Libs” can be enjoyed by all ages and, given the mass availability of cameras in cell phones, “Costume Video” is a must for all costume parties.

Ideas for a “Touch and Feel” haunt can also be reworked into a party game where guests have to guess what the hidden creepy item they are touching is. For example, is that box filled with cold spaghetti supposed to be brains or worms? The person who makes the most correct guesses wins and gets the honor of getting to wash up first. Be sure to keep lots of paper towels on hand and playing this over an area covered in black plastic is a good idea for easy cleaning. Just be sure to ask the guests about potential issues with allergies before putting everything together.

Older partygoers might enjoy a murder mystery like “The Nightly Haunt” or the card game “The Curse of the Wolf.” Speaking of games which require printing out and assembling materials, RavensBlight has a huge selection of games available.

Smaller gatherings of guests might want to try giving Zombiepocalypse a try. It’s less “traditional RPG” and more “video game on paper.” InSpectres is also a fun choice which can be found in this classic article (along with other goodies).