Tales From The Dark Tower (& Other Disturbing Destinations) 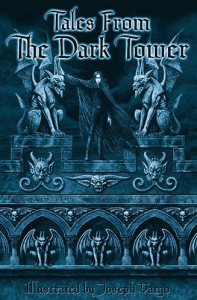 This year saw the release of Return To The Dark Tower, the final installment of the series of books inspired by Nox Arcana’s The Dark Tower. So how will I celebrate the end of the trilogy? By sending you to its start. Not only is James Pipik and Joseph Vargo’s “The Dark Tower” from the first book Tales From The Dark Tower, but it is also the very first story in it!

Next on our terror tour is an infamous castle in the Carpathians owned by an even more infamous count, which is in the process of being taken over by Nazis. It’s a tale of evil vs. evil in “The Devil is Not Mocked” by Manly Wade Wellman.

Eric Heisserer made quite the impression on the internet with his tale “The Dionaea House” and even the quickest glimpse through it will make you see why. Similarly, Benjamin A. Fouché spins tales set in a supernatural valley at Spookinite while Josh Parker’s “The House That Death Forgot” is only one of the many tales available at Please Help Me.

What could possibly make a man afraid to venture into a certain room in his own château? Those who think Guy de Maupassant spoiled it by naming this story “A Ghost” couldn’t be more wrong.

A garden shed in jolly old England might not seem like the location for forbidden experiments, but R. Chetwynd-Hayes proves otherwise in “The Creator.” Considering how it’s by the man whose work inspired The Monster Club, you know it will be anything but ordinary! I first encountered this tale in an anthology including a most interesting story which briefly turns into crossover fan fiction between Ilsa, She Wolf of the SS and the Universal monsters! So let Kim Newman take you to the lonely dwelling of a man obsessed with both trivia and television in “Completist Heaven.”

Speaking of television, our next two stories are quite famous for their small screen adaptations. Robert Barbour Johnson’s tale of strange creatures living under New York City in “Far Below” made for an interesting episode of Monsters and far too many people forget Richard Matheson’s “Nightmare at 20,000 Feet” was a short story before it was ever associated with The Twilight Zone.

John Kohlbrenner has an interesting weekly feature on his blog where he shares a Halloween-related half page story. The “Halloween Half Pager” I selected for this article is none other than “This Abandoned House.”

David J. Schow’s “Visitation” takes the reader to a strange hotel full of even stranger people. It is also home to the most interesting explanation of the supernatural I have ever read. Ramsey Campbell shows how even an office building’s subbasement can be a place of terror in “Down There.”

S.E. Schlosser takes us to the decaying mansion of a mad hermit in “Black Magic” and then takes a side trip to “Axe Murder Hollow.”

Looking for excitement and thrills? One dip in “The Moon Pool” will show you why Abraham Merritt was such a big influence on H.P. Lovecraft. Speaking of classic literature, let’s not forget the haunted country house in Henry James’ “The Turn of the Screw.”

“Night Ride” tells of a young man’s passing by the cottage of a woman with mystical powers. Magic also plays a role in Hugh B. Cave’s “The Blade and The Claw.” While it is about a rented house in Haiti, there are no zombies in it. That would be far too normal compared to the events in this! This story, like many others being shared today, has mature content and reader discretion is advised.