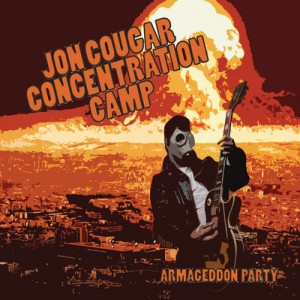 Oh glorious day. We have seen the return of John Cougar Concentration Camp. A legendary band who has seen multiple members playing in up to 3 bands at any one time. A band who started in the mid 90’s, released a few albums and EPs and called it quits and reunite every now and again.

Now, in 2015, Rad Girlfriend Records brings us this 4 song 7″ slab of punk from the band with arguably the greatest name of all time.

Armageddon Party brings a musicianship not heard in bands of recent times. And the 4 tracks on here are strong and each have their own identity so the songs don’t all sound the same song run together like some bands do. And while all songs are good and the final track even has Joe King featured on it, it is side A of this wax that is the barn burner. Holy shit!!

The title track has such a great structure and melody along with awesome guitar work, that it instantly makes your toes tap and your head nod. A song that makes you feel wonderful as the lyrics discuss the eagerness for the end of the world. Armageddon Party indeed.

The second song, “Not That Dumb” also gets stuck in your head quite quickly and has your heart bouncing in all the right ways.

Here is to hoping, fingers crossed, of a future full length. An album full of songs like these would definitely be in the running for album of the year.

So head on over to Rad Girlfriend Records at  http://radgirlfriendrecords.storenvy.com/products/14047398-rgf-051-jon-cougar-concentration-camp-armageddon-party-ep and pick up a copy. It’ll be the best $5 you’ve spent all year.

And while you’re there, grab that Raging Nathans record you’ve been eyeballing.