Hershel and the Hanukkah Goblins 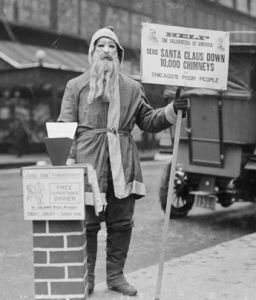 Ho Ho Horror! I’m making like the above creepy Santa and have plenty of treats for you. The first of which is a stencil for making a type of elf known as a “Brownie.” Although it was originally intended for use on Halloween, you can also use it for Christmas without anyone complaining.

Speaking of elves, have you ever seen those pictures of the “Elf on the Shelf” decoration being up to no good? They’re a real scream! Both “Oh that evil elf on the shelf” and “Elf on a Shelf is Evil” on Pinterest collect all of my favorites.

Pinterest also shows you how to make snow monsters with glowing eyes. The Calvin and Hobbes Wiki has a great list of Calvin’s gruesome snow creations and Dinosaur Dracula has some great notes on making a snow monster. Dino Drac also shows us how to make a Panettone Cake Monster and set up a Christmas Tiki Hut. If you add such a hut to your Christmas bash, you can serve “Pirate Eggnong” and “Christmas Punch” and play Luau in December. But if all your holiday shopping has drained your cash reserves, the Crazed Mugs are here to help with their free download of “Mele Kalikimaka.” UPDATE: The Crazed Mugs download is no longer available, but you can find free exotica downloads under the “Freaky Tiki Surf-ari” tag.

Speaking of festive free downloads, I have loads of free music for you this year! There’s “Halloween for Christmas” by Frenchy and the Punk, Wolfmen of Mars’ “In The Bleak Midwinter,” Kirby Krackle’s surprisingly cheerful “I’m Stuck In A Human Centipede For Christmas,” Jonah Knight’s “Here Come The Yuletide Lads,” Stoveclock’s “Scary Christmas” and Psych Ward Psymphony’s twisted takes on “Jingle Bells” and “The Holly and the Ivy.” Pitchwafuzz’s “Scary Demon Pyrotechnic Christmas Nightmare” sets the stage for oddities like Fortunately Everything Dies’ “Santa’s Slay” and Sometimes the Cat’s “Santa Clause Conquers the Martians.” Those preferring audio drama downloads should enjoy The Confessions of Dorian Gray: Frostbite from Big Finish Productions.

Don’t let its presence among unreleased Trendmasters products fool you, the unpainted It Conquered The World Christmas ornament was just something an employee made for fun. Tom Taggart also has some creepy ornaments you might enjoy and Etsy has lots of Krampus goodies.

If you prefer to build your own decorations, then you’re in luck! VeggieMacabre has plans for a gingerbread house inspired by The Amityville Horror and Do It Yourself Nightmare Before Christmas Props has tons of activities for you. Papercraft fans will appreciate projects like the Krampus, Jack Skellington and the Evil Robot Santa from Futurama. Just like last year, Sonia Harris has created some printable superhero snowflakes. And just like last time, one character (Spider-Man) can be used for a creepy Christmas celebration. The snowflake itself isn’t shown, but you can access it by clicking the general snowflake example picture. Propnomicon has a great lead on a printable dance card from the Miskatonic Yuletide Ball and Wikipedia is offering some high quality scans of two posters for Santa Claus Conquers The Martians you can use to create some truly unique Christmas decor. You could also combine images from the film with printable photo ornaments.

Amazon has so many great horror Christmas goodies, like the Legendary Godzilla ornament, Scary Christmas sweatshirt and various Krampus sweaters. But I want to pay special attention to the music and books this year. Through Your Eyes On Christmas Eve is an amazing steampunk Christmas album from Abney Park while There Be Christmas Dragons from Heather Graham and the Slush Pile has plenty of humor mixed in. King Diamond likes adding elements of horror to Christmas music, as evidenced by “No Presents for Christmas” and Puppet Master. There’s also Merry Monster Christmas, A Scary Little Christmas, Dark Noel, Psychobilly Christmas, Eban Schletter’s Cosmic Christmas and Green Monkey Records Presents Merry Krampus.

The audio book Dark Holidays: A Collection of Ghost Stories has very few actual Christmas stories, but this is actually okay seeing as how it is a British tradition to tell ghost stories during the Christmas season. Those preferring to read their stories will enjoy A Cosmic Christmas and its sequel, A Cosmic Christmas 2 You. There’s also Christmas with the Dead, Monsters Love Christmas Too, Santa Claws, Scared of Santa: Scenes of Terror in Toyland and Monster Christmas. Not satisfied with the brief previews Amazon gave of the those books? Just head over to Google Books to enjoy Drac Von Stoller’s short stories “Twas The Bite Before Christmas” and “Deathmas Day.”