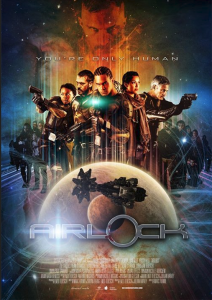 A lot has happened since we last saw the people behind The Tunnel. Although the sequel The Tunnel: Dead End is still in the works, writer/producer/editor Enzo Tedeschi is also developing other projects. One of which is Deadhouse Films, a company devoted to both producing and distributing Australian horror and science fiction media to the world through the internet.

Airlock is a sci-fi thriller miniseries about the investigation of a derelict spacecraft. As countless works of science fiction and horror have taught us, nothing good will come of this. I would love to go into more detail, but doing so would risk spoiling all the twists and turns of the story! Although the first (of three) episodes is available for free download, the other two installments have to be purchased. This distribution model allows for fans to support the production of future series without them having to risk buying something sight unseen. Did I also mention how the paid version also includes a wealth of extra features (including the film’s score)? So snag your free download and spring for the rest. Judging from the official Deadhouse Films Facebook page, your money will be spread among several promising new productions. Said Facebook page was also briefly giving away free DVDs and Blu-Ray versions of The Tunnel, so I advise adding them to your feed so there is absolutely no chance of you missing any future promotions like that.

Special thanks to Distracted Media for use of the image!

Bad Behavior has blocked 1042 access attempts in the last 7 days.