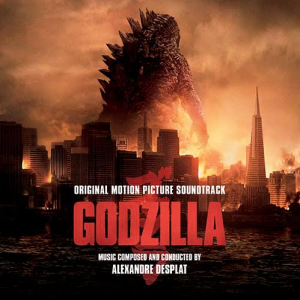 While reviews of the film itself seem quite positive for the most part, reviews of the soundtrack for Legendary’s Godzilla are much more divisive. Some felt it was too over the top and others insisted it was too restrained for a Godzilla movie. Others claimed much of it was interchangeable with music from any given modern action movie. Many G-fans were bewildered by the lack of Akira Ifukube’s work and some even wondered why there wasn’t a dedicated military theme like on the other Godzilla soundtracks. After having seen the movie and listened to the soundtrack, I can say all of these comments do have a little truth to them. But I want to address one point in particular before starting my review (and getting to the other issues). You don’t hire an award-winning composer like Alexandre Desplat and have him churn out a direct imitation of someone else’s style. While I can understand the disappointment from those who would have preferred the use of either the classic Godzilla theme or the “Godzilla March” on an otherwise original soundtrack, I’m not sure that was even possible. As faithful readers of this site know, the movie has its origins in an authorized, but non-canon sequel of sorts to Godzilla vs. The Smog Monster. So I’m not even sure Legendary was even allowed to use any classic Godzilla themes!

Please keep in mind that the name for album’s tracks do give away the plot, so skip reading this until you see the movie. But I will try to limit the amount of spoilers if you feel you just have to read this first.

“Godzilla!” might not be either of the classic Godzilla themes, but traces of their musical DNA are present. Listen carefully to the brass work and you’ll understand. Its low, almost mournful opening creates a sense of uncertainty which builds to that of power and purpose. The use of an electric guitar is an interesting touch that brings in a mild rock feel. Elements of this track return several times throughout the album, so keep your ears open. “Inside The Mines” conjures up a very appropriate feeling of mystery and unease. Especially the electric violin! The chorus and bamboo flute work are a great touch and the drums should bring the footfalls of a titanic beast to mind. “The Power Plant” brings us another moody buildup. I love the way Desplat uses certain musical tones to imply a high tech location. There’s some great string work on display here along with plenty of danger and panic from the brass performances. There’s also some sadness later on, as anyone who has seen the film will immediately recognize what scene it was played under. “To Q Zone” offers a feel of quiet suspense and sometimes the music makes me imagine something breathing or sleeping. “Back to Janjira” starts off soft and sad, but the “monster menace” music returns soon enough. The chanting and frantic strings are a great touch, as is the all too easy to miss piano work layered into the musical frenzy that is the ending. Said ending also features a new twist on the recurring flute and drums motif. “Muto Hatch” initially reminded me of something from the Tron: Legacy soundtrack, but the string work changed that real quick. Just think of Bernard Herrmann’s work in Psycho and you’ll be on the right track. In addition to the overall feel of scrambling, I love the eerie insect-like wails created by the electric violin. “In The Jungle” brings both pulsing tones and variation on the usual flutes and drums while “The Wave” offers grandeur and danger. There’s some excellent chanting and a return of elements from the first track as well. The frenzied “Airport Attack” starts off with a bang which lasts throughout the running time of the track. There’s plenty of the loud string, brass and percussive work which defines most of the score. Although the soft, slow opening of “Missing Spore” gives the listener a break, it quickly revs things up to create plenty of excitement and danger. The eerie electric violins used for Godzilla’s opponents is also present.

“Vegas Aftermath” sees the return of the flute ‘n drums combo, along with some interesting electric touches. The pounding, plodding feel is very welcome in a giant monster movie. The combo returns in “Ford Rescued,” but intensity soon takes over. While I would have appreciated their use being dialed back, I do have to admit they prevent this from being just another stock action track. “Following Godzilla” is another selection with a Tron: Legacy feel (which I should note is a score I enjoyed) whose use of brass and woodwinds adds to its sensation of urgency. “Golden Gate Chaos” also brings a feeling of urgency, but also adds in a feeling of dread and battle. We get a musical crawling sensation for the two M.U.T.OS along with some terrific bassoon and cello work. “Let Them Fight” starts soft at first, but the listener gets a HUGE increase in our sense of battle and dread. Using drums to represent fighting and the musical chirps are clever touches. “Entering The Nest” blows me away every time. It starts off with medium speed and intensity which rapidly mutates into a tense mix of orchestral work. The opening of “Two Against One” should remind any Godzilla fan of past Toho adventures. The clashing musical notes battle for supremacy, just like the film’s monsters, and the final wind down signifies Godzilla’s being overwhelmed by facing two foes at once. This flows into “Last Shot,” which reworks material from the opening track to be much more frantic in feel. The electric violin work towards the end is simply amazing. “Godzilla’s Victory” is appropriately bombastic and there are portions which remind me of the ending to the classic Godzilla theme I discussed earlier. The soft snippets of piano are also used to great effect. “Back To The Ocean” starts soft with horns, flutes and light “Japanese” touches. But, as expected, it transitions into triumphant victory music and gives the listener one last visit from the score’s Godzilla theme. Sadly both Gyorgy Ligeti’s “Requiem” (from the parachute scene) and the music from the end credits are curiously absent from this album.

When Alexandre Desplat set out the score Godzilla, he knew he had to have a suitably “big” sound and assembled an orchestra much larger than he usually worked with. With this and numerous musical references to Akira Ifukube’s past scores, it’s easy to see how people who aren’t diehard Godzilla fans would be surprised at how much louder this is when compared to your standard film score. Since most tracks rank from 9-10, it’s also not hard to see why those who prefer their Godzilla music to be a solid 11 would complain about a “restrained” feel. It has plenty of subtle touches amidst all the grandeur and I discover more and more of them every time I listen to it. Part of the reason for the multiple playbacks was due to my realizing how comparing it to the soundtrack of the Japanese Godzilla movies would be unfair if I only listened to it once. After having watched those films over and over again throughout the years, the music has been burned into my brain. How could the music from any new release hope to compete with that in terms of memorability? These listening sessions have also made me realize how tracks I thought were comparable to stock music the first time around actually weren’t! It took me awhile, but I saw how they thematically fit into both the film and the overall mood of the score. Now I think only a few tracks are saved from being “action movie music” by a few subtle touches. People are correct about there being a lack of a military march, but I did enjoy the score anyway. I suspect the lack of one had less to do with the composer and more to do with the script focusing on kaiju battles and one particular member of the U.S. Navy over the military engaging the monsters directly. With Godzilla: Original Motion Picture Soundtrack, Desplat has crafted a highly enjoyable listening experience which I recommend that all Godzilla fans check out. Hopefully they will find its mix of bombast and subtle touches (along with a nice Ifukube influence) to be as enthralling as I do.

Special thanks to WaterTower Music for the review copy!