When the editor told me that I was booked to interview Henry B. Walthall I was both elated and dismayed. Elated because I was to meet the hero of so many wonderful pictures, and dismayed because I was–well, let’s say a little afraid. My imagination had led me to think that the man was something mighty, a man to be treated as one out of many. So, when I arrived at the Essanay plant, I was surprised to find that Mr. Walthall was considered very easy to interview. When I go to interview a person, I generally get some of the minor details from the publicity department. So I went there first, and as I was still rather timorous, I asked one of the young men there to introduce me to Mr. Walthall.

Together we wended our way through what seemed to be miles of dressing rooms, bearing many prominent names. Little Ruth Stonehouse sat in her dressing room and gave me a cheering hail. On, down past the wardrobe and into the bachelors’ room we roamed. There, seated in the corner, were several men playing cards to while away their leisure hours. Bryant Washburn, that handsome young hero-villain, had just won a hand, the game being pinochle, and the rest of the crowd were having a great time over it. One of these was the man I sought, and though I hated to stop the game, I was going to see him whether the others liked it or not.

My guide called Mr. Walthall from the game and explained to him what I wanted, to which Mr. Walthall assented gracefully. Turning to the others he called, “Going to be busy for a while boys. Go on without me.”

Groans and much peevishness greeted this remark, and Charlie Stein, who, under ordinary conditions, is about as good-natured as possible, remarked, “Ain’t it just like a woman to bust up a game like that. Just as I was getting interested, too.”

“Shut up,” remarked Bryant, in an undertone, “she’ll hear you.”

Charlie promptly subsided, and Mr. Walthall led the way to a couple of chairs near the wardrobe room, and smiling engagedly, asked: “Well, how shall we begin?”

“I suppose I ought to ask you where you were born and when and all that,” I replied; “but I found it all out in the publicity department before I saw you, so you might tell me why you went on the stage in the first place.” 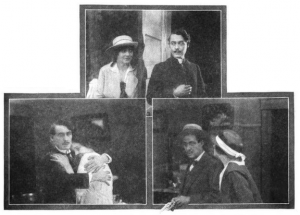 “Well,” laughed Mr. Walthall, “you are an industrious person, aren’t you? Why I went on the stage? I went on the stage because the narrow confines of the bar and legal oratory did not give my dramatic expression room to exert itself. You see, my father had law all picked out as my ultimate occupation, and one of the things we learned in the South is to obey our parents, so I took up law. I guess you might say that I was a partial success; but I didn’t particularly like the stuff, so, when the Spanish-American war broke out, I enlisted and went to Cuba. When the war was over I came back and got a position in a stock company. I succeeded fairly well there, and played in a great many companies in the East.

“One evening in the Players’ Club in New York, I heard of a friend of mine, Jim Kirkwood, who was making a good deal of progress in motion pictures, and although I had always looked down on the picture actor, I looked up Jim, and his enthusiasm prompted me to try my hand at the game.

“My first part was that of a ditch digger; but I guess it was a success, for they gave me a good part in the next picture. I first played with the Biograph Company, where I met David Griffith, with whom I have spent many very pleasant working hours. He is a great director, with a mind that is always on the go. I have often wondered when he slept, for he always seemed to have a new idea ready for any occasion.

“When Griffith went West with the Majestic forces on what was then the newest program, the Mutual, he took several of the Biograph people with him. Mabel Normand, Blanche Sweet and the Gish girls were some of them. Out in California Griffith seemed to be able to do whatever he wanted to, so we got out some exceptional film. “The Avenging Conscience” and “The Birth of a Nation’ were two of the largest, and probably the best I ever worked in out there.

“About that time Mr. Spoor of this company made me a very flattering offer, and I felt that I could not afford to pass it up. Since I came here I have had some exceptionally good pictures to play in, and Essanay have done everything they could to help me make really great pictures. ‘Temper’ was my first Essanay release, and my latest is “The Raven, in which I portray the character of Edgar Allen Poe, whom I consider one of the greatest dramatic poetry writers of our country.” 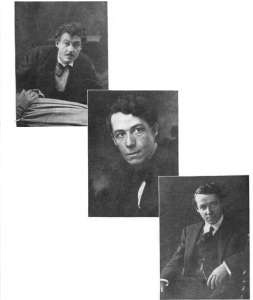 Mr. Walthall looked at his watch, and then said, “I have an appointment at four-thirty, and it’s nearly that now. Don’t you think you have enough interview for one time?”

I sighed. “I was so interested in all that you told me that I forgot all about it being an interview, but I guess it will make a mighty good one, if I can remember all the things you have said.”

“Good heavens,” he replied, “are you going to write everything I have said?”

“Every word I can remember,” I replied, “and anything else I can think about you. For instance, the world is interested in your hair and eyes, and where you were born and”–

“Enough! enough!” he cried, “when you have written all that you will have told all there is to tell.”

“Just one thing more,” I pleaded.

“Well, if you insist,” he smiled. “I never was good at refusing the last wish of a lady. What is it?”

“Are you married?” I asked, with a catch in my voice.

“No,” he replied, and I thought I caught a touch of sadness in his voice. “Not even married. You see, there’s not much interesting about me.” He looked, at his watch again “It’s a quarter of five, so I must go.”

“But I want some pictures,” I exclaimed.

“Well, perhaps Mr. Washburn will get some for you,” he replied, turning to that individual, “Bryant, get out some pictures for me, will you? I have to keep an appointment.”

“Sure,” replied that good-looking villain-hero, “anything to please the ladies.”

He was very nice and gave me a lot of pictures of Mr Walthall, who was making a grand dash for the door. I guess dramatic expression is part of his make-up, for his face says as much as his mouth, and he has the most expressive eyes I have ever seen. They just seem to talk, too. And the publicity department was right when they said he was easy to interview. It wasn’t any trouble at all, and I hope you enjoy my version as much as I did.

[This post is based around an article included in the January 1915 issue of Feature Movie Magazine (Volume 5, Issue 1). Although as much effort as possible was put into preserving the article as it originally appeared, some aspects of the layout were impossible to replicate. To see the original, head on over to Google Books.]