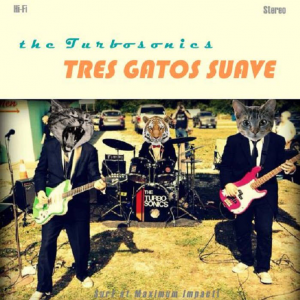 When I last discussed the Turbosonics, I expressed hope the (then) upcoming release of Tres Gatos Suave (“Three Cool Cats” for those who you who didn’t take high school Spanish) would lead to more spooky stuff by the band. Did I get my wish? Let’s look at the album and find out!

“Ricochet” kicks things off with a literal bang and the same sound effect occasionally returns throughout the track. The rollicking surf music is comprised of numerous cymbal strikes and varied guitar work. “Sand Devil” is the first example of the band delving into the scary side of things on this album and I was not disappointed. It’s fast, but not frantically so. “Frozen Surf” is much slower and mellower, but the percussion and well-timed appearances by reverb keep it from ever getting repetitive. There are some excellent guitar variations on display as well. The seagulls which come in at the end nicely lead into the soothing retro melody that is “Jennette’s Pier.” I love the drum work in “Dune Burger.” There’s plenty of classic surf touches can be found in this, along with hand claps and samples of Samuel L. Jackson’s character from Pulp Fiction. It definitely sound like the sort of thing that could have been on the film’s soundtrack, especially given the traces of surf favorites “Miserlou” and “Rumble” in its musical DNA.

“Meat Slicer from Outer Space” is the longest track of the album, not that you’ll mind thanks to the bongos, maracas and reverb (along withe lots of sound effects thrown in for good measure). It’s sure to become one of your favorites. “Skip Jack Strut” has a peppy feel thanks to its use of tambourines, along with plenty of reverb and percussion. The “Hey ho” chorus makes it especially infectious. The opening of “Black Spoon Fuzz” is wonderfully dirty and gritty. It’s why “fuzz” is in its title, after all. The insanely catchy garage rock feel and the amazing bongo section just blew me away. “Marcellus Waltz” is, just as the name implies, a waltz. A surf guitar waltz with a “Latin” feel, but a waltz none the less. At least until things get kicked up a notch or two later in the song. I love the percussion work here. It’s a brilliant idea for the album to end with several attention-grabbers in a row. That said, the waltz segments also help the listener calm down and cool off after listening to so many such tracks. Gosh, given the other Pulp Fiction reference on this and the “Hattori Hanzo” song from their last album, I think they just might be Quentin Tarantino fans!

The Turbosonics have hit it out of the park once again and I urge all surf fans to pick up this album ASAP. But since the album was somewhat shorter (track-wise) than the other releases being covered in this year’s Freaky Tiki Surf-ari, let’s move from ASAP to VFW. VFW Surf, that is. 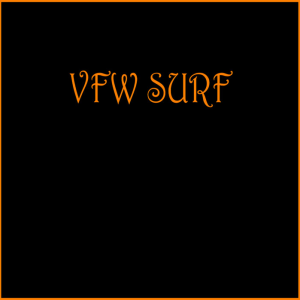 Not only does this special Bandcamp freebie feature the band’s original lineup, but it consists entirely of classic covers! Covers of songs by the Gamblers, Dick Dale, the Pixies, Link Wray and Big Ray and the Futuras to be precise. Speedy drums lead to lots of varied reverb guitar goodness in “Moon Dawg.” The Turbosonics’ take on “Miserlou” is much longer here than it was on Live At Howlers – Pittsburgh, 2010 thanks to it not having been paired with “Maleguena” like it was there. It’s a bit more subdued than one might expect from a cover of this iconic surf track, but it still conveys all the power of the original. “Cecelia Ann” is awesomely heavy and I love the use of percussion in the opening of “Jack the Ripper.” It’s somewhat shorter than their version from Live at Howler’s – 2012, but that doesn’t make it any less awesome. As someone who used to play the drums in school concerts, I always love an opening which features the clacking of drumsticks. But there’s so much more to love in “Horrorscope.” There’s also numerous guitar variations, speedy percussion and, yes, even the overall feel! Every single one of these covers is worthy of standing alongside the originals and I feel 100% confident in saying this. But you don’t have to take my word for it, as all three of these albums are available as free downloads over at their official Bandcamp page. So go on and treat yourself to some surf excellence. Your ears will thank you for it!