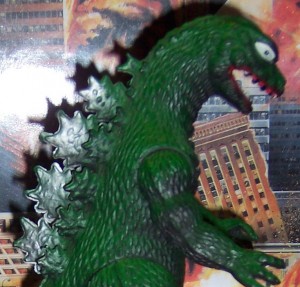 With a monster as famous as Godzilla, it’s hard to follow the format I set in up my previous articles about Hedorah, Gigan and Mothra. So much about Godzilla is already known and discussing things like height and weight changes would result in getting too bogged down in details. My having already used a lot of the really obscure stuff in other articles hasn’t helped, either. But I think I’ve managed to assemble a respectable amount of relatively obscure trivia for you:

1. Godzilla’s skin texture is supposed to remind viewers of the keloid scars seen on some of the survivors of the Hiroshima bombings.

2. Godzilla, King of the Monsters! was not the original title the American distributors of the first film were going to use. The earliest reference to the film’s upcoming American release simply referred to it as “Gojira” and the title “Godzilla, The Sea Beast” was considered at one point.

4. Although the original plan for Godzilla Raids Again was to release the film under that name in the US, the producer of the American version changed the name to Gigantis, The Fire Monster in order to keep people from thinking it was just a reissued version of the first film. Considering how the 40’s Captain America serial was put back in theaters under the name The Return of Captain America in the 50’s, he wasn’t wrong to think there could be some confusion.

5. Godzilla fans are very familiar with how the name “Gojira” is a combination of the words “gorilla” and “kujira” (Japanese for “whale”), which apparently was the nickname of a Toho employee. However, all evidence seems to point to the employee having never existed.

6. The musical composition most commonly referred to as Godzilla’s theme was actually supposed to represent the Japanese military!

7. There’s a line of Japanese watermelons which are marketed as “Godzilla eggs.”

8. The first piece of Godzilla merchandise ever released in Japan was a 1955 target game. It took America until the 60’s to get their first Godzilla product, which was a board game.

9. Thanks to the use of different costumes in numerous films, Godzilla’s appearance has changed over the years. But if you don’t pay enough attention, you might not notice how Godzilla lost a toe on each foot (among other details)!

10. Have you ever wondered how Godzilla returned for all those sequels despite having been killed by the Oxygen Destroyer in the first movie? According to the Japanese version of Godzilla Raids Again, the Godzilla in that film is actually a similarly mutated member of the same species and not the original monster. This was further confirmed in a proposed 90’s film where the ghost of the first Godzilla battles the Godzilla of the Heisei films and later in Godzilla Against MechaGodzilla.

11. The first time Godzilla appeared in a Japanese film using only computer effects was in a dream sequence from Always-Zoku San-Chome no Yuhi (which means “Always-Sunset on Third Street 2” in English) in 2007.

12. Godzilla is both an official citizen and cultural ambassador of Japan. On top of that, he also has a star on the Hollywood Walk of Fame. Not bad for a fictional character!

Bad Behavior has blocked 1459 access attempts in the last 7 days.