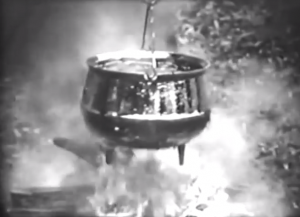 Do you remember all the buzz over the special milkshake promoting the Goosebumps movie? If you wanted to try one and didn’t have a Johnny Rocket’s in your area, you were out of luck. At least you were until Let’s Play OC! shared the recipe online.

Speaking of drinks linked to films, there’s the “Sharknado Cocktail” and “Mater’s Adult Butterbeer” from Allrecipes.com, while the “Killer Shrew Shake” from the MST3K Wiki. Although that last recipe comes from a comedy sketch from Mystery Science Theater 3000, the writers never intended for anyone to try making it. But you know how fans are! I’ve heard you should only drink about 1/4 of a small paper cup’s worth due to the sugar content, so drink at your own risk.

Getting back to the subject of Harry Potter, The Geeky Chef Cookbook by Cassandra Reeder has a recipe for “Butter Beer” that’s great for all ages, along with “Blue Milk” inspired by a scene from Star Wars Episode IV: A New Hope. No, it’s not just milk with blue food coloring.

10 On-Set Secrets: Halloween by Stacy Eddi Nelson has cocktails like the “Metamorphosis Martini,” “Black Magic Manifesto” and “Swamp Bottom.” Terry Rowan’s Halloween: A Scary Film Guide has a recipe for apple cider with a surprising ingredient and The Jello Shots Handbook by Monte Vilhauer shows how to make black Jell-O shots called “OOOZers.”

Wikipedia has both of of the recipes for the powerful “Corpse Reviver” cocktail, onthebar is offering the “American Cereal Killer” and Bewtoad shows how to brew up a “Southern Tier Pumpking Clone.”