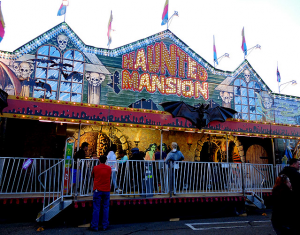 I love the painted facades of the haunted attractions you see at fairs and carnivals. The garish, often airbrushed artwork never fails to catch the eye and promises so much that the stuff inside rarely lives up to your expectations. The more impressive the art, the greater chance you’ll end up like Lio once the ride is over. They’re similar to old VHS and DVD cover art in that way, although thankfully facades haven’t been taken over by Photoshop. But what about when the ride lives up to the facade? That’s a treat and it keeps so many of us handing over our tickets for a chance at another such experience.

Kurtis Primm’s article “The Dark Ride (A Memory)” has plenty of pictures and memories sure to tag at the nostalgia of any reader. But he’s not the only one to do so. “Carnival Glories” and its sequel from Dinosaur Dracula take an extensive look at the amazing artwork of the “Haunted Mansion” dark ride. Simple names like this led to many referring to such attractions as “haunted houses” and “spook houses” in addition to the industry term “dark rides.”

Mail Order Mysteries author Kirk Demarais has also cataloged the facades of numerous dark rides in addition to haunted houses in permanent locations who have adopted similar looks (more on that later). It was thanks to him that I learned dark rides are often referred to as “ghost trains” in Europe. The Wikimedia Commons galleries for “Ghost trains” and “Dark rides by country” are treasure troves of facade images. Here are a few of my favorites:

I have a special treat for fans of that last image. While looking to see if any coffee table books about such facades existed (they don’t), I discovered how Trimper’s Rides by Monica Thrash and Brandon Seidl has the original sketch for that attraction’s facade! This is a truly rare look at designing of such rides and hopefully more will surface as time goes on. These examples also show facades are more than just cool paintings. There’s usually giant monsters, specialized lettering and other extra bits stuck on for good measure.

This brings us the the type of haunted attraction I usually discuss here. The ones which aren’t part of amusement parks and the like. Despite their different locations, more and more haunted houses, hayrides, etc. are adopting the style of dark ride facades! Here are some of the many wonderful examples I’ve been able to find so far:

After checking numerous reviews and other photographs associated with many of the haunted attractions noted above, I feel confident these kinds of haunts have a better chance of living up to the promises made by the artwork on their exteriors. Although this is sometimes due to their including such artwork inside the attraction itself. In addition to the airbrushed graphics in ChromaDepth 3D mazes, plenty of haunted attractions have sections using artwork similar to the kind seen on dark ride facades. You can see numerous examples of this in the following:

I should also point out how many carnival dark rides are designed to be disassembled, transported and reassembled at another location. This means the length of the ride is effected due to space restrictions, with multiple level rides being more expensive to move. Ride operators might not even have the necessary skills to make repairs if something is damaged on the course of the trip. Permanent attractions, especially ones which don’t rely entirely on mechanical effects, usually don’t have deal with such things and seem to be able to “bounce back” from mishaps faster as a result.

Special thanks to Dinosaur Dracula for use of the image!

Bad Behavior has blocked 1460 access attempts in the last 7 days.