An Octopus That Never Lived 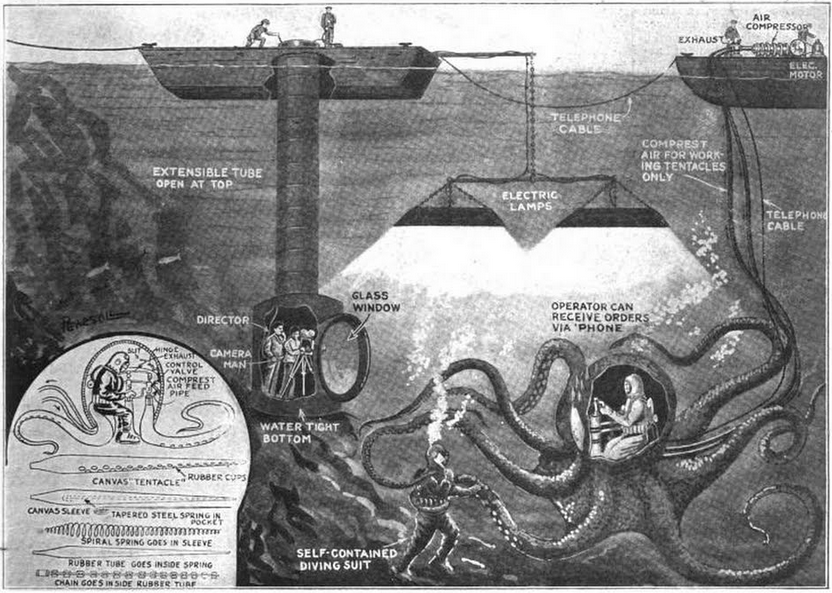 “In the Movies They Do It.” What? Why Build Deep Sea Monsters to Order. This Monster Octopus Never Lived, Yet Thousands of Photoplay Fans Have Seen the Battle Between the Terror of the Deep and a Man, and Could Have Sworn That it Was a Real Honest-to-Goodness Octopus. Comprest Air, Admitted to or Released from the Canvas Tentacles, Caused Them To Curl Up In That Creepy Fashion That Makes You Shiver. Electric Lights Helped to Illuminate the Scene Under Water, While Telephone Orders Could be Given to the Man Inside the Octopus. The Photographer was Located in a Water-Tight Tube in the Manner Shown. A Self-Contained Diving Suit Was Worn by the Man in the Octopus.

Possibly you were fortunate enough to have witnest the famous motion picture taken under the sea, in which a man fights a battle with a terrifying octopus, or devil-fish. If you did see this picture, you were undoubtedly puzzled as to how this undersea battle was actually staged in photographing the scene. The interesting details of how the uncanny and lifelike movements of the long slashing tentacles of the octopus were produced, are given in a patent recently issued to John Ernest Williamson. The arrangement of the machinery used in producing this remarkable undersea picture, is shown clearly in the accompanying illustration.

To start with, the motion pictures were taken with an ordinary movie camera placed in a watertight compartment at the bottom of the tube shown in the picture. The compartment containing the movie camera, the photographer, and the director, was left open to the air, and as the tube was watertight at the bottom and along its entire length, the men at the bottom of the tube received plenty of fresh air at all times. Electric light and telephone wires were led down into the photography room, orders being given by telephone when necessary to Mr. Octopus—who was personified by none other than a full-grown man, who had carefully studied the movements of this particular undersea cephalopod—so that, by varying the amount of comprest air forced into the hollow, flexible tentacles, very realistic movements of the latter were effected.

The man who sat inside the body of this made-to-order octopus was equipt with one of the new style self-contained diving suits, which are fitted with the necessary oxygen and other tanks, and carried on the back, so that no rubber tubes for supplying air, etc., were necessary so far as he was concerned. Two small sized rubber tubes were led from the body of this pseudo-octopus to the surface of the water, where one of the tubes connected with a motor-driven air compressor; while the other was simply secured to a length of pipe open to the atmosphere, so as to serve as an exhaust.

The central body shell of this awesome looking devil-fish was built in two parts hinged together, so that the operator could easily enter or leave it. Owing to the arrangement described, and by utilizing the self-contained diving suit, no air bubbles escaped from the octopus during the taking of the scenes, which might have aroused strong suspicion among many people who viewed the picture, that the whole affair was artificially produced and not the real thing. Since the central shell or body is formed with an open bottom, there is no material pocketing of air within the shell, thus practically eliminating any buoyancy of the shell and permitting it to retain its position on the sea bottom without employing any heavy weight to hold it there. This central body shell is fitted as can be seen, with a number of flexible members made to resemble the actual tentacles of an octopus, hollow suction cups and all, while the most realistic illusion imaginable was evolved by the sinuous and squirming movements of these tentacles, particularly by the curling of the outer end portions thereof. Of course, if these various tentacle movements followed each other in any particular cycle or direction, the audience would quickly notice it, and the natural effect so desired by the producers would have been jeopardized, but owing to the highly ingenious method devised for building the tentacles with springs, chains and multiple tubes, coupled with the irregular impulses of comprest air applied, the illusion was perfect.

When the air valves were opened to different degrees the successive tentacles about the body would expand, and coil around in a realistic manner. When the operator wisht to cause a tentacle to straighten out, the comprest air was applied to this particular tentacle or group of tentacles; he allowed the air in them to escape upward thru the rubber exhaust tube to the surface; in this way no undesirable air bubbles were liberated, which would tend to spoil the illusion as we have already explained. As may be surmised, the inventor mentions in his patent describing this unusual sea monster, that his ideas can be applied to the building of sea serpents and other strange animals.

The detailed construction of the mechanical tentacles is shown in one of the illustrations herewith. The spring maintains the canvas covers expanded cross-sectionally, preserving the proper contour and yet permitting substantial freedom of movement of the tentacle under the action of varying air pressures produced in the casing. The inner tube forms a collapsible air chamber which, by virtue of its shape, will cause movement of the tentacle against the resistance of the tapered steel spring shown, when air is introduced into the tube; the degree of the movement is dependent to a greater or less extent upon the amount of air which is fed into it. The inner bag or sack, being within the casing, moves with the latter under the action of the steel spring. The spiral spring having a shape corresponding with that of the canvas casings, provides a light form or shape for retaining these casings expanded cross-sectionally, but owing to its coil-like form, this spring permits comparatively free movement of the outer end.

Thus it is seen that by varying the pressure and amount of air in the bag or sack, the difference in value of the air pressure as compared to the spring pressure, can be varied and the movements of the tentacle are thus controlled to a greater or less extent. The purpose of the metal chain, which has links of constantly decreasing size toward the outer end, is to counteract by its weight, the effect of buoyancy when the tentacle tube is inflated.

[This post is based around an article included in the October 1921 issue of Science and Invention (Volume 9, Issue 6). Although as much effort as possible was put into preserving the article as it originally appeared, some aspects of the layout were impossible to replicate. To see the original, head on over to Google Books. While you’re there, you can also read up on how the studio tried passing it off as an actual octopus and how this eventually led to a lawsuit. Be sure to check out what the octopus actually looked like!]

Bad Behavior has blocked 654 access attempts in the last 7 days.