The Autopsies, ‘A Memoir From The Morgue’ 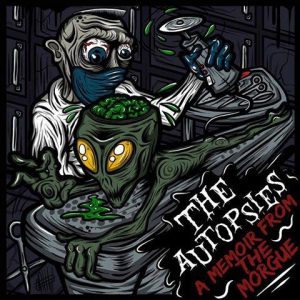 Psychobilly has always been best when it is served with a beer and a healthy dose of fun. There’s plenty of fun on A Memoir From The Morgue, the 7” release from THE AUTOPSIES. Another gem from Killjoy Records, this is a three song happy hour that’s two parts formaldehyde, one part radioactive material from Area 51, topped with a lemon and served with a smile.

Hailing from Los Angeles, this three-piece is a highly efficient machine, one that doesn’t waste any bit of their sound. Edgar’s drumming and Jonny’s bass create the deep heartbeat that’s perfect for guitarists Brandon’s six-strings, which sound like they’re sharp as a surgeon’s scalpel. The instrumental “Rumble” gives every member a moment to shine and the song itself is a tasty chaser after the mortuary love-song, “Autopsy.” Here’s hoping they include more instros in their next releases.

The B-Side the soundtrack to an unplanned detour through some restricted New Mexico desert, perhaps on the way to a gig in Las Vegas or back home to LA. “Roswell” is a fast-paced trip, like the best monster movies from a 1950’s drive-in. Brandon’s vocals vary from guttural howl to velvet crooner, and while every psychobilly frontman needs the former in his back pocket, the songs really come to life when he switches to the latter.

Ultimately, A Memoir From The Morgue is a fun success. It introduces the band, hints at the exciting potential of what’s to come and leaves you wanting more. Any psycho, horror punk or demented weirdo will want to get a copy for their own home dissection. Definitely recommended. Get your copy soon, as they’re only around for a limited time only.