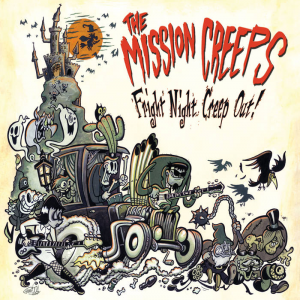 It’s been quite a wait since the Mission Creeps released Midnight Blood back in 2013. Thankfully Fright Night Creep Out is finally here! Has the band lost something over their lengthy break or have they only gotten better with age? Let’s find out!

The title track “Fright Night Creep Out” really puts the “surf” in “surf punk.” James Arr croons and howls (literally) throughout the track and there’s also a fantastic guitar solo. One listen and I’m sure you’ll love it as much as I do. The surf is also strong in “Party by the Lake,” where bassist Miss Frankie Stein really shows off her skills. I’m still struggling over choosing between this and the first track as my favorite song of the album! Theremin work and maracas which sound like rattlesnakes usher us into “Doing Time in Ol’ Tucson.” The vocals have a definite Johnny Cash influence which goes nicely with the brooding guitar work and steady percussion. In contrast to the lyrics about outlaws and jail, it really piles on the electronic effects towards the end. It’s not a complaint, mind you. Just an observation. The guitars of “Not as Wicked as You” grab your attention right from the start. Don’t expect them to let go or you’ll be sorely disappointed. But that’s the only possible disappointment you could ever have while listening to this. The eerie echoes and the sound of chittering bats are a great touch. Turn up your stereo and turn down the lights for this one!

Is it love or something else entirely? That’s the question posed by “Hexed (Some Form of Witchcraft),” whose lyrics tell of a woman’s bewitching effect on the singer. There’s a distinct 60’s feel to this one. Speaking of which, the Mission Creeps’ take on the Rolling Stones’ “Paint it Black” is both heavy on the maracas and sure to please fans of the original while adding enough new twists to keep things fresh. I can’t be the only one out there who gets flashbacks to Stir of Echoes whenever they hear this. “Killer Gnome” is as catchy as hell, right from it’s heavy fuzz introduction. I also love the creepy laughter at the end. You’ll be singing along and bobbing your head to the guitars as you listen. Trust me. “Wasted” is fairly fast ‘n furious, drawing the listener in right from the first note. Even when it slows down for the home stretch, the mesmerizing guitar work will keep you hooked. It must be experienced in order to be truly appreciated.

Fright Night Creep Out shows the Mission Creeps have still got it and I doubt they’ll ever lose it. Unlike a lot of artwork associated with horror movies, the album’s cover art accurately depicts the frantic and frightful rock feel of this release. So hurry up and grab a copy now!