Coming Soon…..It Rises From The Tomb

What would a mad scientist’s lab be without some creepy preserved specimens? This project recreates the look of a diaphonized exhibit using a cheap toy dinosaur skeleton and some basic craft supplies. It’s not movie quality, but from a foot away the finished specimen looks awesome.  Not too shabby for something that costs around $2 to make. 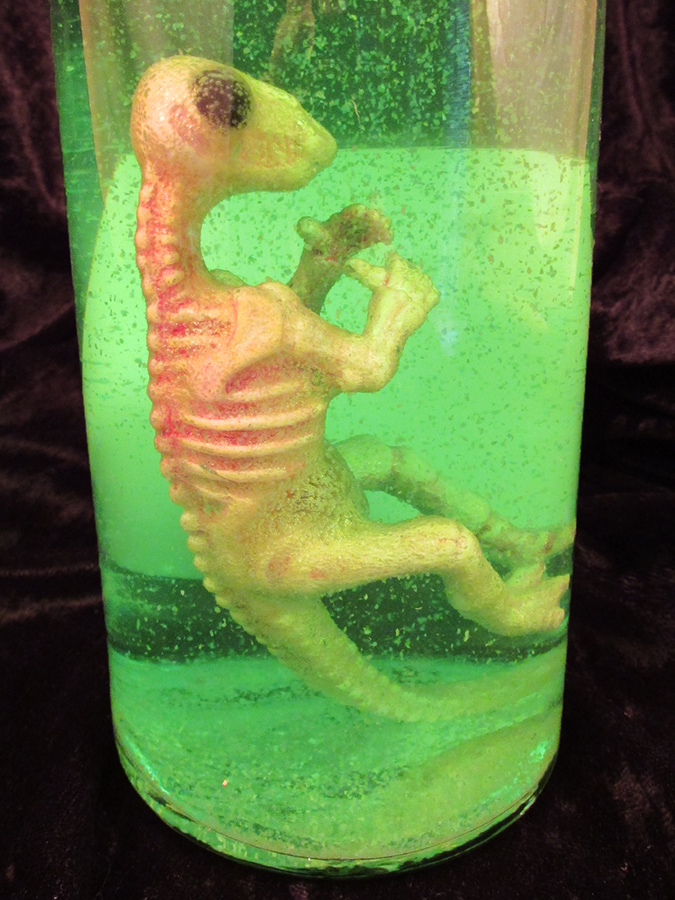 – Toy dinosaur skeleton. I used one from this set available on Amazon. They’re less than $6 for a dozen, with free shipping for Prime members.

– Black cabochons. These are the plastic hemispheres you find mounted in cheap jewelry. Once again I went through Amazon, ordering a package of 500 cabochons in various sizes. Enough critter eyes for a lifetime! You can find slightly cheaper sets on Ebay, but they usually have to be shipped from China.

– Gloves.  You’ll be dipping the plastic dinosaur into near-boiling water.  To protect your hands I’d suggest both a pair of latex or nitrile medical gloves and some cheap work gloves to insulate your hands.

We start off with this basic plastic dinosaur.  It’s pretty cheesy, but the sculpt has a surprising amount of detail. 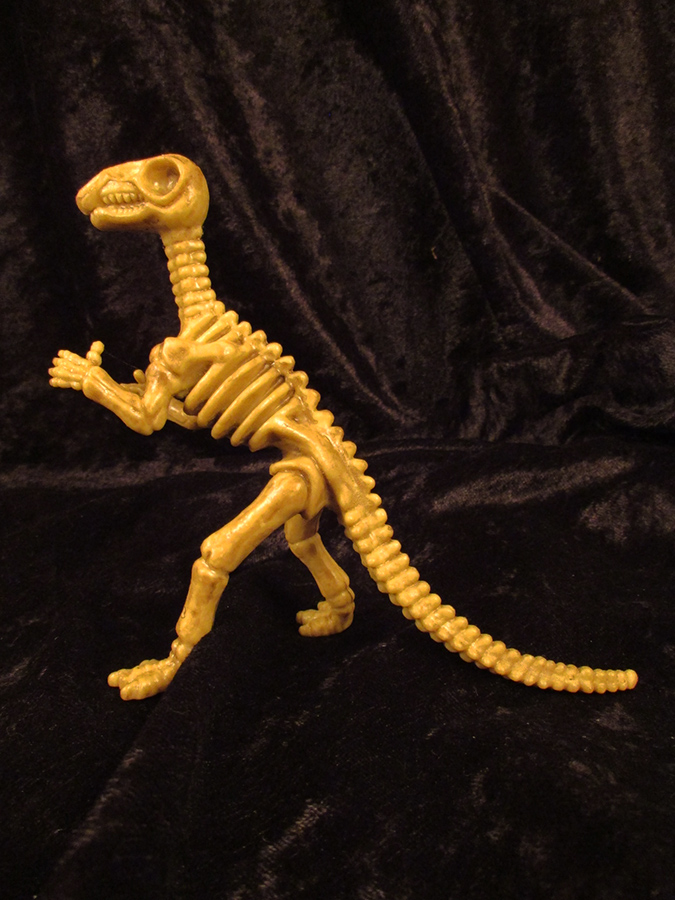 You’ll be reshaping the toy figure into the fetal position.  The easiest way to evenly heat the parts you’re bending is to dip them into a measuring cup full of water heated to boiling in the microwave.  The plastic becomes rubbery and flexible at around 160 degrees Fahrenheit. That gives you about five minutes of working time as the water slowly cools off.

Keep in mind THIS STUFF IS HOT.  REALLY HOT.  THIRD DEGREE BURN HOT.  To protect your hands put on the medical gloves and then don the work gloves.  The outer gloves will help insulate your hands from the heat, while the inner layer prevents any hot water from coming in contact with your skin.  It’s reasonably safe if you have a modicum of common sense. 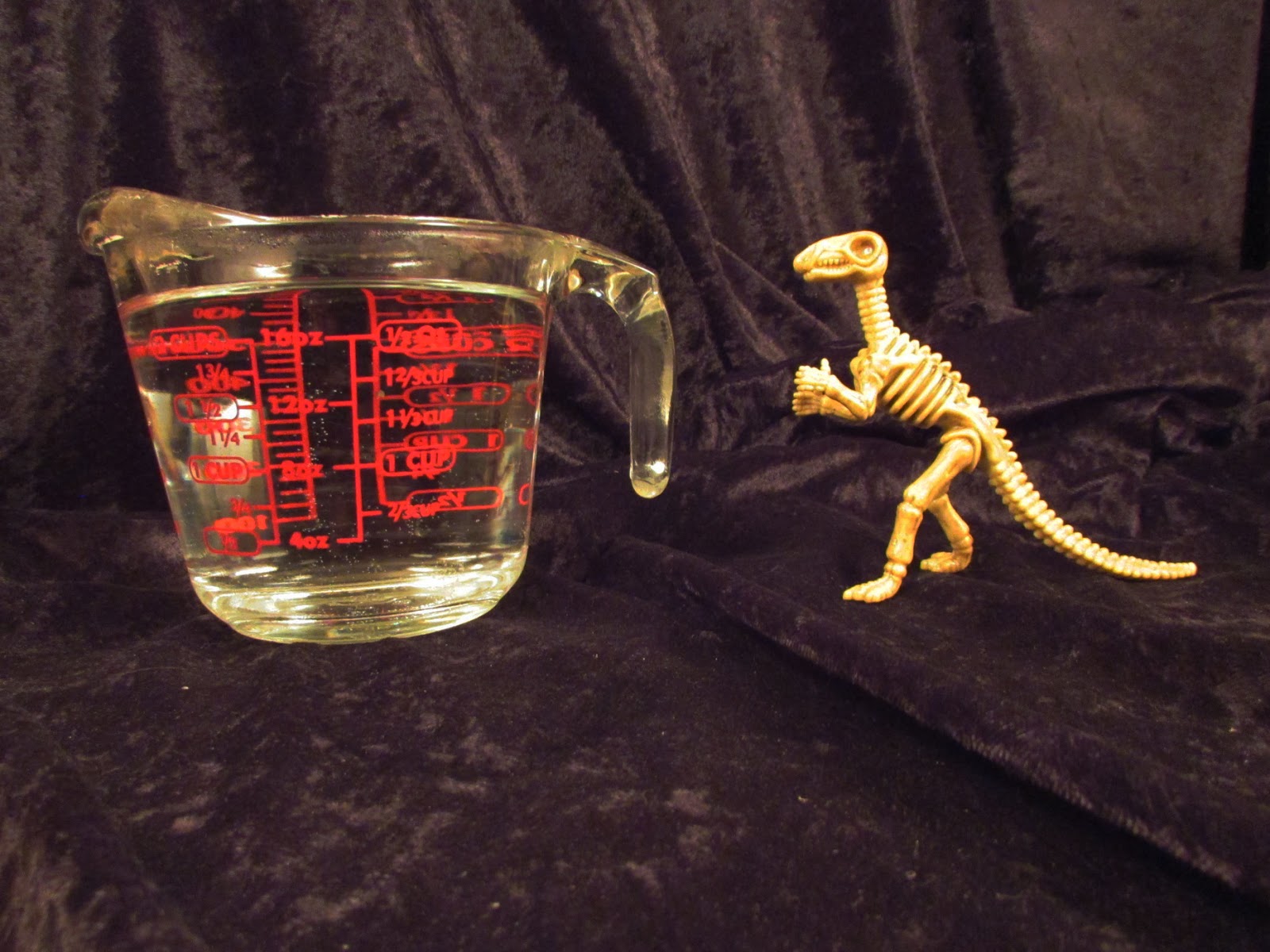 In a second container you’ll need cold water, preferably with a few ice cubes.  Dip the dinosaur into the hot water and bend the limbs into shape.  Then plunge the toy into the cold water and the plastic will instantly set.  To lever the feet and hands into position you may need to use a pair of pliers.  Work on one limb at a time and you can bend the skeleton into almost any shape you want.

Here’s what the toy will look like once you’re done. 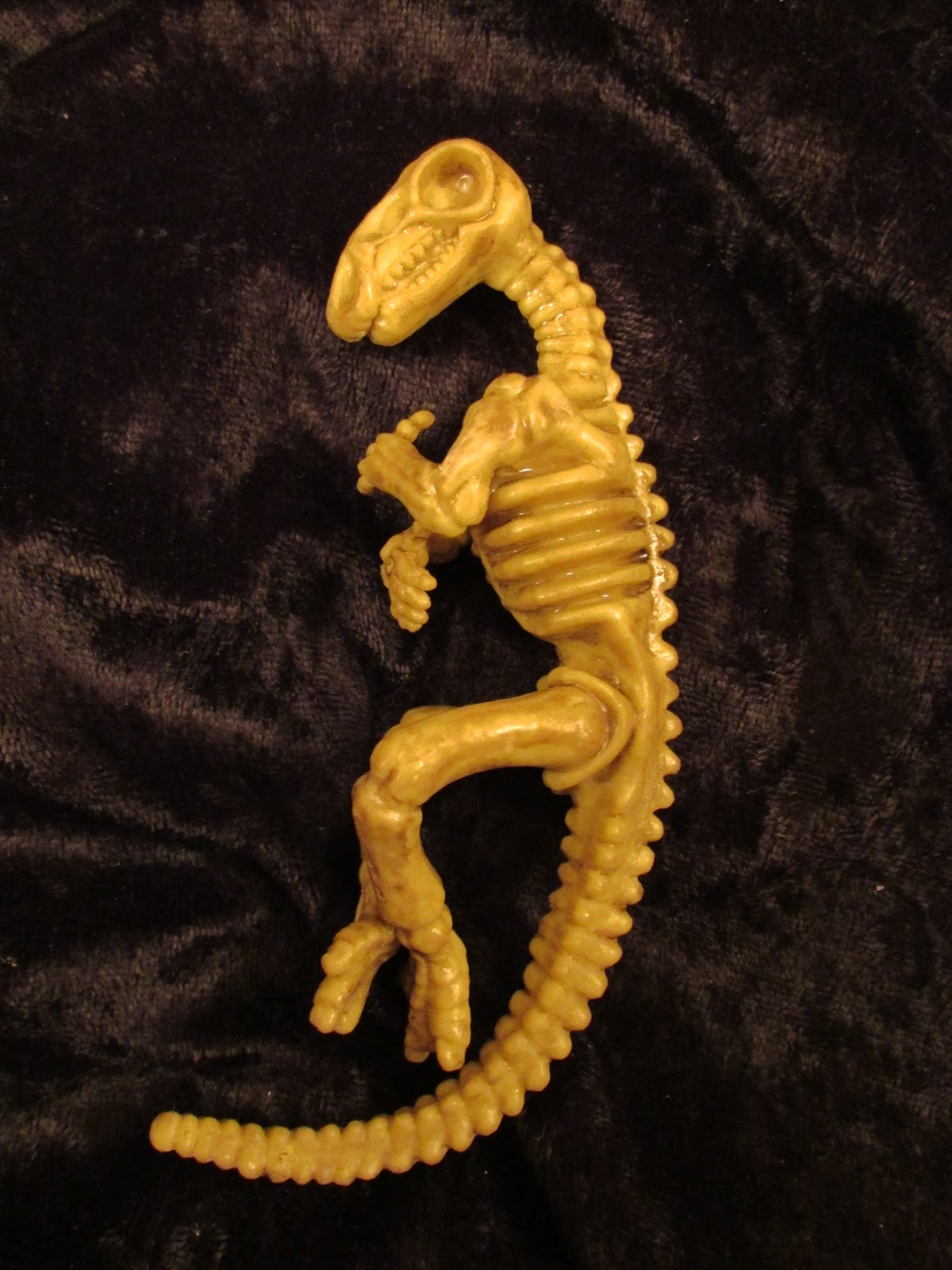 Now we need to take care of the surface finish.  The eyes are a pair of black cabochons set into the figure’s existing eye sockets with hot glue.  The entire figure was then painted white, followed by washes of pink and red.  Don’t worry too much about the quality of the paintjob, since… 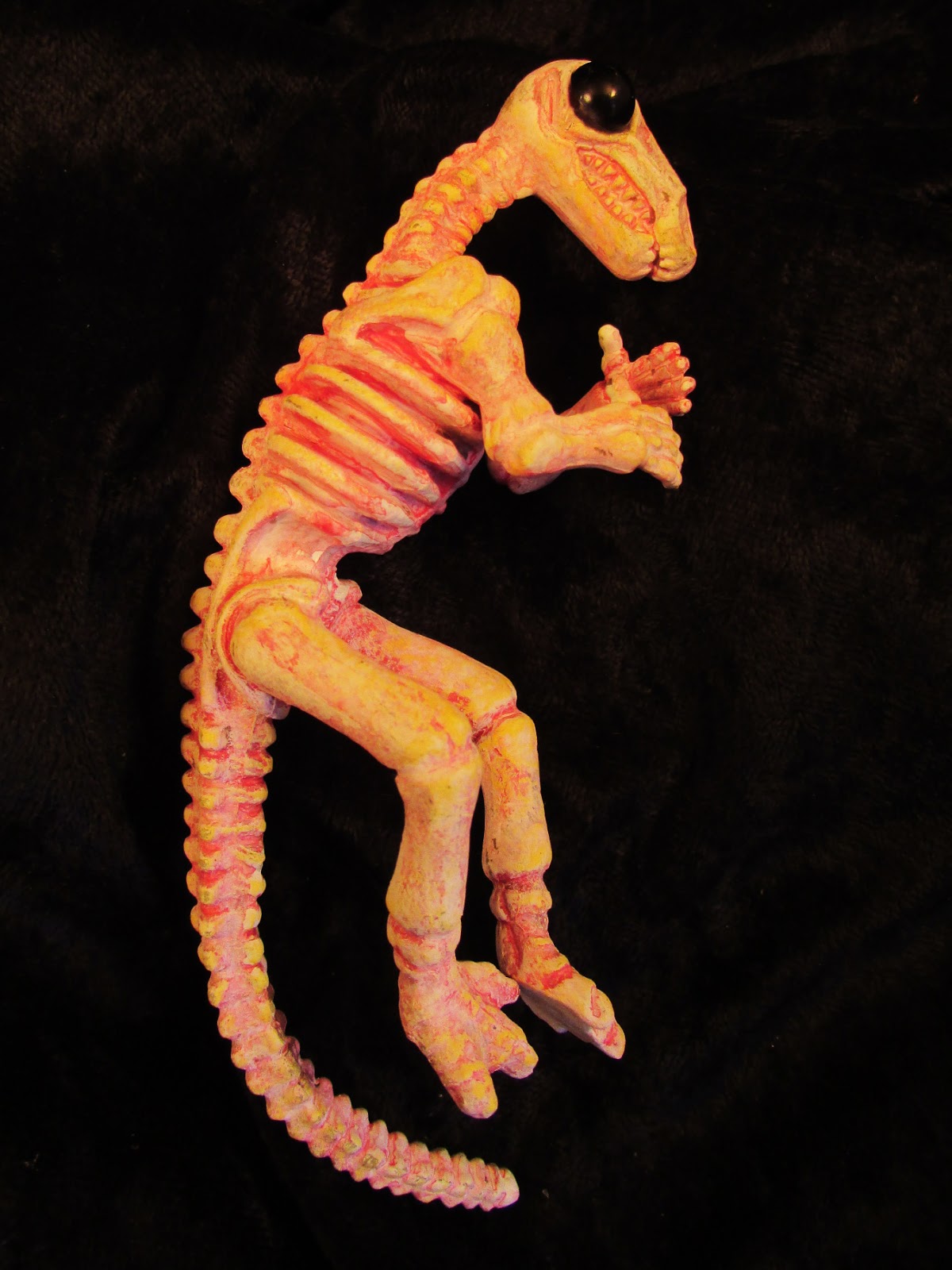 …we’re going to cover the figure in rubber cement.  The result is a transparent fleshy layer that adds a ton of visual interest.  Just brush on the cement, allow it to dry, and then repeat the process until you’re happy with the effect.  In the belly area I hot glued some bits of scrap latex to suggest internal organs and then applied a thick layer of rubber cement to build up a distended abdomen. 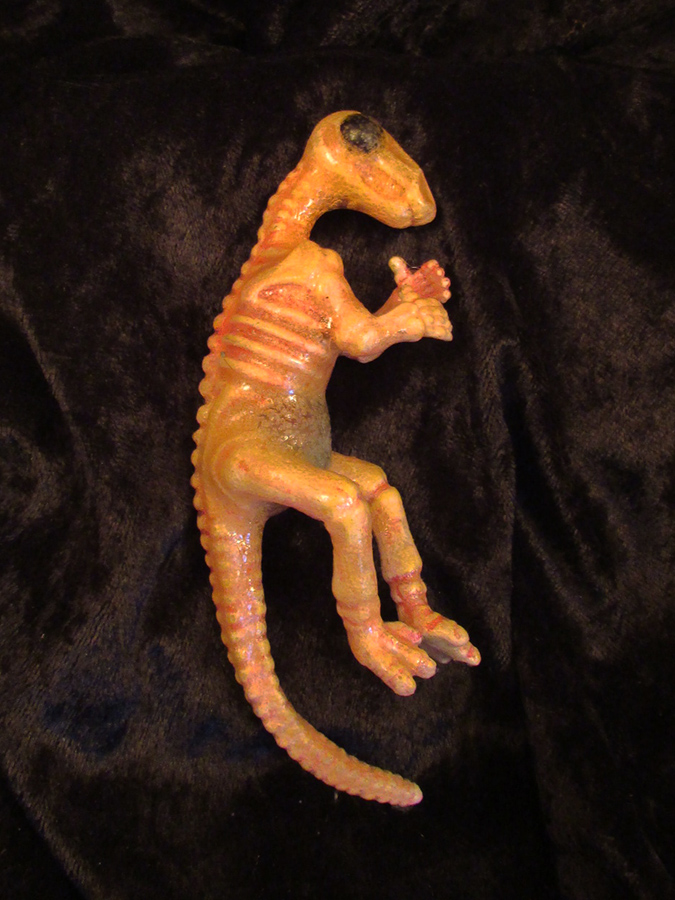 And there you have it.  Drop the critter into a jar of colored water and you have a great bookshelf display.  In the finished specimen up at the top of the page I added two drops of green food coloring.  The floating particulates are a sprinkle of garlic powder.  It gives the fluid a nice grungy appearance as well as being an anti-bacterial agent.