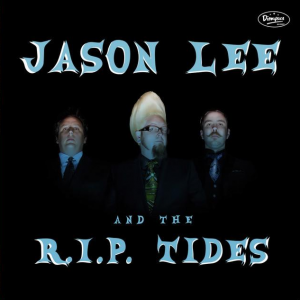 Hailing from San Diego, Jason Lee and the R.I.P.tides have been active long before the release of their 2014 self-titled debut album. Check out Jason Lee’s impressive résumé if you don’t believe me. With all their touring (complete with live Go-Go dancers) and numerous appearances at Tiki Oasis, they’ve built up quite the fan base. The band’s lineup currently consists of:

However, the album’s back cover credits the following:

As the name suggests, horror movies are a big influence on the group’s work. But that’s not all! Jason Lee and the R.I.P.tides is the only surf band I’ve ever encountered which lists roots and ska as influences on their sound. Let’s jump right into the review to see how much of this turns up in the album…

“Snake Eyes” kicks things off with a sweet, soft reverb buildup. As you can imagine, things get very fast (and very amazing) very quickly. There’s plenty of heavy reverb on display and I loved the use of percussion. The use of rattlesnake noises were a great touch. Like the name suggests, “Speed Racer” has a much faster opening than the preceding track. There’s also lots of reverb variations backed by steady drums. “She Fell Asleep” is fast and heavy, with a surprise saxophone appearance. While many surf bands out there who like to list stuff they like as “influences” despite never having it appear in their work, Jason Lee and the R.I.P.tides aren’t one of them. When they say there’s a ska influence, then you can actually expect ska to make an appearance! “Dead in Del Mar” contrasts its low, slow guitars with speedy percussion. That is, until everything kicks up and blasts your brain with awesomeness! In addition to pointing out how the return to a slow pace at the end has a creepy feel to it, I want to note how this is one of my personal favorites. “The Open Road” starts with a sample of a woman saying “Don’t try to get any closer to me or you’ll be killed. There’s no escape for me, I know it!” Sadly, I don’t know where it’s from. What I can say, however, is how this track’s wonderfully heavy feel creates the feeling of barrelling down the highway.

Guitars are the stars of “Black Tide,” especially during the opening! The touches of reverb and snapping snare drums aid the track’s bouncy feel. It’s a pity it’s the shortest track of the album. If you guessed there would be samples from the Adam West Batman series in “Caped Crusader,” give yourself a prize. Rather than merely covering the iconic theme song, the band opted to create an original composition with some elements which will remind listeners of said theme instead. I think one listen will be all it will take to convince you this was the right choice. “Swamp Shack” combines a medium speed intro with plenty of classic surf reverb spread throughout the track. The slowdowns work to its advantage, along with the new percussive touches. You’ll know them when you hear them. With a name like “Rod Swirling,” you know there’s going to callbacks to the opening theme of The Twilight Zone. If you know anyone who wonders why surf music enthusiasts say reverb has a “wet” sound, play this energetic little number for them. “Creepy Crawly” is another personal favorite, whose bouncy opening feel is carried throughout the track. In fact, it gets even bouncier as time goes on! Low and slow guitar strums start off “Sucker Punch” and speedy drums usher in its quicker pace. I love the use of guitars here, despite their burying the sample. The slow “Funeral Waltz” is appropriately low key thanks to its appropriately melancholy and mournful guitars. The album comes to a close with “The Evil Eye.” Things start out with a sample from the trailer for The Thing That Couldn’t Die. The guitars and percussion are both fast and furious, with no shortage of bold flourishes. It’s a fantastic close to an equally fantastic album.

Surf diehards and newbies alike should immediately seek out Jason Lee and the R.I.P.tides. When I say this, I’m referring to both the album of that name and the band. With a truly unique surf sound and use of vintage equipment, what’s not to love? The album itself is available on vinyl and as a digital download, but doesn’t have a CD release (at least as of this writing). You can even check out Jason Lee’s guitar tutorials over at the RockOnGoodPeople YouTube channel while you wait for the band’s next release. You can also tide yourself over with his side project, Jason Lee and the Black Tides!

Bad Behavior has blocked 921 access attempts in the last 7 days.