Daytona of the Dead

Music to Haunt By: Halloween 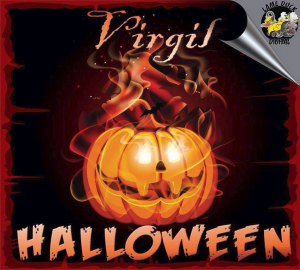 How on Earth did I miss out on reviewing Virgil Franklin’s Halloween when it came out in 2015? It’s gets even more bizarre when you factor in how I actually plugged it in my review of his big comeback album! But I can either spend my time reviewing it or trying to figure out how it happened. I think you know which choice I’ll be making.

Otherworldly tones weave in and out of “So It Begins” to create a feeling of mystery and uncertainty. It’s not unlike something you would hear being played on a glass armonica. Of course this would have to be a glass armonica which somehow blends creepy chirping and beeping tones into the musical background at times. The slow snippets of piano work in “By The Fullness Of The Moon” steadily increase in both speed and volume. Eerie backing tones and wordless female vocals soon join them, only for the piano to take over. Soft chimes briefly show up near middle of track (and return for the ending), but it’s the vocal effects that really shine here. There are vocal tones and the alternating female vocals and male vocals. Said vocals seem very distant and also alternate with the piano work. “Worms” offers heavy synth tones with some occasional light touches. But even heavier tones worm their way in (har har), only for light and unearthly tones to assert themselves later. In fact, they often sound like screams. Heavy pounding drums kick off “Midnight Has Come.” The ethereal notes and backing tones are joined by crackling static and other startling effects. It use of tambourines is surprisingly effective! There’s even a point where only the soft, low musical backing is heard, although the drums do eventually return. The use of drums in “Behind You” should remind you of numerous classic movies with a gothic horror feel. The tolling bells and menacing tones are perfectly combined with piano work and gongs. In contrast, “It Hungers” has a comparatively more modern approach. Feedback and other distorted tones create the feeling of something slinking about in the darkness. The distortion effects even get turned all the way up halfway through the track. The addition of sci-fi synths give this potential for use in a laboratory or alien spaceship scene. But even if those synths weren’t present, it would still be a perfect fit for a dark maze. Grasping about in the dark to find your way is so much more thrilling when you can’t shake the feeling that something is after you.

Like many tracks I’ve reviewed for the 2017 countdown, “Insane In The Membrane” has a low, slow opening build. This time said build consists of spacey synths and a soft throbbing tone in back. Sometimes all you can hear is backing! Wailing tones and other synth touches pop in occasionally. When the spacey synths do make their return, they’re kind enough to bring new touches with them. This would work well when played back-to-back with the album’s final track. The pounding drums, ominous string work and horns in “A Bump In The Night” have a surprisingly epic feel. There’s also a music box feel to the background music and a violin solo. The drums come back after a brief pause of silence and the horns take things back to normal. A track with such a grandly dark tone deserves to be used as the soundtrack for an encounter with Dracula or a visit to a room with a spooky throne. “Flies,” as the name might lead you to suspect, uses vaguely insect-like synths to conjure up a swarm of buzzing and flying pests. Although many of the album’s tracks make great use of stereo effects, this one particularly stands out. Not only does it make you feel like you’re surrounded, but it could also make people swear a dark room is moving! So take that a step further by directing guests into a room with low lighting conditions and Gianni Sarcone-style optical illusions painted on the walls! Alternately, this could be used as the soundtrack for a stationary vortex tunnel or creepy kitchen. “Carol Ann” is indeed a reference to the Poltergeist franchise, as evidenced by tuning effects and touches of static. Otherworldly and sci-fi synths put in appearances while the backing tones add feel of menace. Speaking of guessing the contents of a track using its name, “Skeleton Dance” is not a haunting ballroom waltz! The music box opening and circus-like percussion music used to represent skeleton bones make it clear this is cute rather than scary. You could use it in a haunted circus or nursery right before the scary stuff happens or just make some dancing skeletons. In “Boil, Boil, Toil and Trouble,” blowing winds lead to noises indicating that something slimy is being stirred. Dripping and the occasional moment of bubbling can also be heard, along some evil synth work in back. But the bubbling picks up once the ghostly tones enter the scene. Sewers, swamps and laboratories could get as much use out of this as a cauldron could. Tolling bells start the appropriately named final track, “Fine’.” Chirping crickets and dark synth work soon take over, with interesting percussion effects and return appearance by the bells at times. Unease is created through its only using synths for awhile, only to layer in bells for the rest of its duration. This practically cries out to be used in a graveyard or haunted forest.

Virgil Franklin’s Halloween proves that good things come to those who wait. All tracks can be looped individually to suit your haunt’s needs and the album could be played on a loop on the holiday it’s named after. But you might want to include some decorations to play off the mechanical and science fiction nature of certain tracks if you go that route. Having Frankenstein’s monster peer out through a window would easily do the trick if you don’t feel like constructing crashed flying saucers and the like. Although his most recent releases after this aren’t ambient, I can confirm he’s hard at work on a new album full of the spooky atmosphere you crave. As a special Halloween treat, Virgil has temporarily made the album available on a “Name Your Price” basis!