Music to Haunt By: Mark Harvey

Music to Haunt By: Horror Trilogy 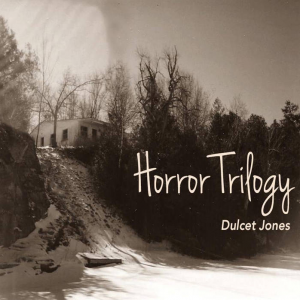 Horror Trilogy is one of the more unique releases I’ve seen in the world of scary ambient music. The “album” is actually three separate tracks with a track combining all three in order thrown in as well!

“Horror Trilogy Part One” uses beautifully slow guitar work to create a sense of eerie elegance. It might seem like it’ll drift into pleasant listening music territory, but a classic spooky riff always brings it back. It’s perfect for the opening room of your haunted house. While that track was based on the same classical guitar work he uses in his Solo Guitar Originals album, “Horror Trilogy Part Two” combines a more traditional rock feel with synth work. Unearthly guitars and percussion combine for a medium paced (and volume) opening. Synths get eerily ethereal when the guitars and drums pick up. Sometimes there are also sweet spooky guitar solos followed by drums and more moaning synths. The feel gets really heavy as the track adds some distortion and electrical tuning effects about a minute and half into it. I just love the ending fade. “Horror Trilogy Part Three” is pure synth work consisting of a pounding beat and vaguely bell-like tones. It really ups the scare factor when said bells take a break. There’s lots of creepy synth touches on display as well. “Horror Trilogy” combines all three for an end result which runs for a little over eight minutes.

Horror Trilogy packs in a lot of spooky ambience in one small package. Buying the individual tracks separately will cost you buck fifty while just buying the combination track only costs a dollar. Either way, it’s a low cost investment with a high cost sound. Each track can easily be looped and they go with just about any scary scene you can think up. Personally, I recommend using one (or more) of the tracks with a misdirection scare featuring a gargoyle. When Dulcet Jones first contacted me about this album, he had started playing in a folk band and wasn’t sure when he would do another horror project. But I have since learned that has slowed down and he’s currently looking into starting a band with a horror theme. That way he can release material throughout the year rather than only focus on Halloween! So be sure to contact him if you’re interested (especially if you’re a vocalist). Oh, and he also revealed that he used to live in the house shown on the cover! That’s the one of my favorite things about Dulcet Jones: he combines great music with cool trivia about the creation of his works.

Special thanks to Dulcet Jones for the review copy!

Bad Behavior has blocked 3358 access attempts in the last 7 days.