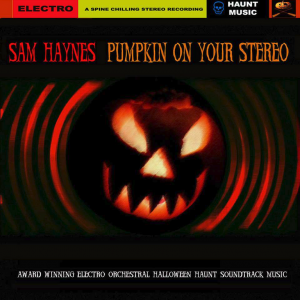 Sam Haynes has been as busy as ever. Something Wicked and Something Wicked II both came out in 2016, with the Bandcamp release of the former having some exclusive bonus tracks. But those who already bought their copy elsewhere can get the same tracks from his side project Scaretrax. Reviewing either of them was tempting, but the delightfully retro cover art of Sam’s 2017 release Pumpkin On Your Stereo was just too cool to resist!

“October Moon” starts things off with a bang. Its extremely catchy opening beat has a dark, moody backing. Pounding tones takes over for a spell and the final result is perfect for general listening throughout the year! But those focusing on October usage should try it at a Halloween party or as a way to entertain people waiting in line at their haunted attraction. “Ghost House (Haunt Mix)” opts for a softer, slower opening. It’s much lower key and creepier than the last track. There’s even some unearthly touches thrown in with the sinister synths for good measure. A whispering sample brings in a louder dance beat similar to the original version. There’s lots of interesting electro variations which overwhelms the pianos in the background. The dueling pianos manage to crawl their way to the front for the last leg of the track, along with some wordless female vocals. Bursts of creepy organ work and eerie synths open “Demons of the undead (original mix)” and the repeating sample about “demons of the undead” gives the track its name. It has a very loud and lively beat. Although creepy variations come in later, this is more of a dance track than a haunted ambience track. “Pumpkin Jack” starts with soft sounds and even softer music. But a plinking music box builds things up. The spooky strings and synth combo which follows does slow down a bit towards the end, but it’s still energetic enough to dance to. There’s soft music box break at times, but it always goes back to normal. Well, except for the ending. “DeathNotes” takes us back to the world of haunted ambience. Its incredibly soft dark opening sounds almost like footsteps at times. It grows in both volume and intensity thanks to a very different music box melody and some pounding tones occasionally appear. Factor in some slow piano work and you have one very unnerving and scary package. This is a perfect choice for rooms involving spooky dolls.

You can barely hear “Shockwaves” at first. But it’s dance time once the electro beats start up! The soft string work in background is a bit moody and there’s some interesting synth noodling, along with the numerous drum machine beats and circus-like music in the back. However, the sound of chirping crickets replaces music for the ending. You can easily get away with using this for a clown room. “Midnight creeping” has dark maze potential thanks to its overall sneaking feel. It’s got soft freaky noises, steady distorted drums, creeptastic beats and even the obligatory music box segment. Let’s not forget the moaning backing tones! “House of the dead” has plenty of dark synth variations and its eerie nature grows along with the volume. Some drum strikes and strings lead to a music box and electro beat. The rest of this dance track is backed by steady drum beats. Piano work opens “The Hypnotist,” but drums and electro touches soon follow. There’s also some interesting lighter touches thanks to his use of a xylophone. This is another track best suited for a haunted playroom or circus scene. The eerie and unearthly beats of “Spirit of Samhain” twist and turn. Other synth tones and music box chimes join in with the drums for a track best suited for parties and entertaining. The low and heavy “Blackest eyes” is filled with hints of menace and unease. I love how well the string work goes with the piano parts. The pounding distorted buildup and woman screaming near the end add to the effect. The creepy “Crawlspace” is the most haunt worthy of the dance tracks. This is thanks to its sneaky synth opening, eerie electro touches, distorted vocal snippets and pounding drums. Sam’s trademark electro feel is taken to new heights in “ElectroShock.” This catchy little number also includes scary synths, devious drums and a music box cameo. Its mix of whimsy and spooky make it a perfect match for a people-eating pumpkin! “Samhain” has a soft ‘n slow steady beat. Synthesizers come in later with some soft piano work. It’s mostly synth work for the bulk of track, though. It has a low key creepy feel but the drums do admittedly kick things up. “The Coven” is brimming with haunt potential thanks to its creepy piano work and backing tones. The music box, drum bursts and string work help as well. I love the name “Demons of the undead (rave digger mix).” This time around the track has a creepier opening beat and doesn’t use the full sample. The organ work is wonderfully varied and even gets a bit spooky once it slows down. “Deathnotes (remix)” begins with a soft music box tune which gradually builds in volume and synth strikes join in for good measure. Here’s a fun way to use it in the last part of your attraction if you want a more family friendly approach to haunting: Have visitors walk into a monster party! Performers can all wear duplicates of the costumes and makeup used for the previous parts of the haunt to give the impression all the monsters have secretly made their way to a going away party for the guests. You can even use standard Halloween party decorations and have a snack table where free candy is given out!

Pumpkin On Your Stereo is best suited for parties and entertaining those waiting in line for a haunt, although there are a few tracks which can work inside of a haunt. In those cases, looping the tracks individually won’t be an issue but looping the entire album (if at all) is better for the first two options I suggested. It’s also a fun way to make handing out candy on Halloween extra special. I also imagine it would be more fun to sit around listening to this during lulls than listening to scary sound effects while waiting for more trick-or-treaters to arrive. I would have preferred some bonus tracks without samples, especially since it was difficult to make out what the samples actually said this time around. But that is an admittedly minor complaint.

Bad Behavior has blocked 775 access attempts in the last 7 days.