The Order of the Fly 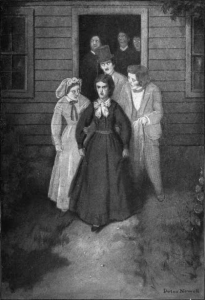 Last year I had shared a piece of weird fiction called “The Hall Bedroom” by Mary E. Wilkins (who is also known as Mary Eleanor Wilkins Freeman). I later learned she had written several highly regarded horror stories and it just felt wrong for me to have only shared one of her “weird” stories rather than a chilling one. Seeing as how it’s Women in Horror Month, I have selected her short story “Luella Miller.” Who is Mrs. Miller and why does her old house have a sinister reputation for years after her demise? You’ll have to read it to find out!

Both Virginia Woolf’s “A Haunted House” and Edith Wharton’s “The Lady Maid’s Bell” are ghost stories that might now seem like ghost stories the first time they are read. But subsequent readings will make things much clearer.

Edith Wharton isn’t the only Edith with a story featured here. Although Edith Nesbit is best known for her children’s stories, she has penned her share of horror fiction as well. One such example is “John Charrington’s Wedding.” Like many a children’s story, it has a moral lesson. In this case it seems to be: “Don’t talk about coming back from the dead while inside a graveyard.” “The Open Door” by Margaret Oliphant does have children in it, but it is definitely not a children’s story!

Did you know that Mary Shelley wrote another horror story years after Frankenstein was published? It’s called “Transformation” and features an encounter with a doppelgänger of sorts.

The magazine turned website Horror Garage has a great collection of scary stories. These include “Deprived” by Marcy Italiano, “Revenge” by Ellen Denton and a nasty little number called “Dead and Damned” by Janett L. Grady.

Kerri-Leigh Grady’s “Her Mother’s Daughter” is disturbing tale of a post-apocalyptic future and Rachel F. Williams’ “Mr. Gabriel” is an intense psychological horror tale. Ms. Williams is also a talented composer and you can make your reading experience even more intense by streaming “Mr. Gabriel’s Theme” and an extra creepy reversed version of said theme!

I was looking through a sample of Dark Horse Comics’ Creepy revival and was quite taken with their adaptation of “The Hymn of Ordeal, No.23” by Rhiannon Rasmussen-Silverstein. The description of what changes the human body must undergo in order to pilot spacecrafts designed to fight off an alien invasion still haunts me.

Don’t Read This At Night is a horror anthology written by the High Tech High Chula Vista 9th Grade Co-Op and how can you not be at least intrigued by that? Most of the stories shown in the preview are by young men, but Regina Gonzalez’s “They Deserve It” also made the cut. “Making the cut” is a very appropriate phrase given the subject matter of her tale…

Speaking of anthologies, When the Lights Go Out brings us a story about a séance gone wrong from Tricia Drammeh called “Midnight Summons” and Adan Ramie’s “An Arm and a Leg” tells of a clique high school clique with a dark secret. City of Weird: 30 Otherworldly Portland Tales features weird fiction set in Oregon’s weirdest city. “Octopocalypse: A Love Story” Brigitte Winter and “The Sturgeon Queen” by Rene Denfeld are two very different tales from it which involve aquatic life forms.

Speaking of “weird,” Nancy Springer’s “Bad Lands” is a weird west tale which appeared in the revived version of Weird Tales magazine!

Hillary Lyon’s “Green Sweater, Pink Roses” and Veronica Magenta Nero’s “Tiny Cages” both take us to the grave. You can find more works by Ms. Nero, along with stories by A.F. Stewart and Nina D’Arcangela, over at Pen of the Damned.

Roberta Lannes’ “Essence of the Beast” is special not only because it tells a story from a werewolf’s point of view, but also because said werewolf is female!

Although Pat Cadigan is best known for her cyberpunk tales, she’s also at home in the realm of the supernatural. “Eenie, Meenie, Ipsateenie” shows how events from your childhood can literally come back to haunt you.