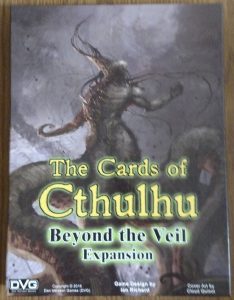 Having released The Cards Of Cthulhu,
Dan Verssen Games could have easily rested on its laurels and moved on to creating other games. Thankfully they went the extra mile and created The Cards Of Cthulhu: Beyond The Veil Expansion. This expansion introduces Nyarlathotep to the game, along with some new Horrors to aid the infamous Outer God. Thankfully, it also include some new followers and Investigator cards (along with plenty of items) in order to give anyone who plays a fighting chance!

Here is the new board: 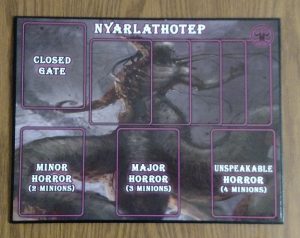 And here’s everything you get with this expansion (not including the new instruction book): 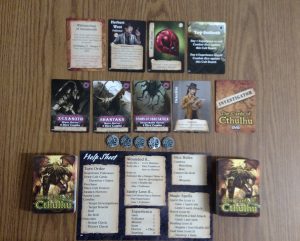 One new element of play are the Investigation cards. Drawing one or more will require you to either discard them and pay a penalty or to investigate. Investigating can get you rewards, but requires you to roll a certain amount in order to succeed (and avoid being wounded). Thankfully, this expansion gives you plenty of new followers who can investigate and take the risk for you. In fact, two of the new followers are none other than Herbert West and Randolph Carter! Choosing to play as the “Detective” Investigator also gets you a special bonus when rolling during investigations. Another type of new card are ones which increase the difficulty of accomplishing certain tasks on each board. You have to pay experience tokens to get rid of them, but boards can take more than one of this kind of card and you have to pay to remove each on separately. This can become an issue if you have any gate cards in play. I neglected to mention them in my last review, but gate cards require you to draw an extra number of cards for each gate in play and you have to pay experience to get rid of them! Thankfully you get five new high value tokens with this expansion (along with a new rules sheet tailored for this version of the game). Let’s take a closer look:

The silver color does help set them apart from the copper tokens from The Cards Of Cthulhu, although I personally think the patina effect on those tokens looked better. Since The Cards Of Cthulhu: Beyond The Veil Expansion requires you to already own The Cards Of Cthulhu in order to play it, there are no extra dice included. You can certainly play this without using the cards from the original game, but you can also combine the decks if you want to. In fact, the expansion cards call have “Veil” printed on the bottom front of the cards in case you need to separate them from the regular cards. The instructions include the illustrated rules, sample game demonstrations and numerous new rules for both solitaire and multiplayer games to further enhance its replay value. I tried out the traditional and “novella” methods of solo play and had fun both ways. In fact, I racked up more wins playing this version than I did playing The Cards Of Cthulhu for my last review! Sadly, no short stories are included this time around. Dan Verssen Games has hit it out of the park once again with The Cards Of Cthulhu: Beyond The Veil Expansion. But that’s an admittedly minor quibble. Those upset that the expansion doesn’t include more tokens or extra dice will be happy to learn bonus packs containing those items are available separately (but aren’t required to play this).