Freaky Tiki Surf-ari: Swinging Sounds From Beyond The Nether Regions 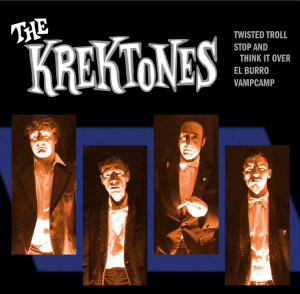 Hailing from North Carolina, the Krektones were founded in 2009 by artist and musician Jason Krekel. The Krektones consist of:

Mr. Krekel has performed in Krekel and Whoa (formerly Mad Tea), Sufi Brothers, Snake Oil Medicine Show, Firecracker Jazz Band and the Kings, so you know he has some serious skills. The same can be said for the other members. Not only have they played with Krekel in some of the previously mentioned bands, but they also bring a combined mix of experience from Freakwater, Stump the Host, Drunken Prayer, the Unholy Trio, the Reigning Sound, the Parting Gifts and White Heat. The band’s influences include the Ventures, Link Wray, Jerry Cole & His Spacemen, Tav Falco and far too many other bands to list here. In other words, prepare to have your socks knocked off!

The band’s 2012 self-tiled debut kicks things off with “Twisted Troll.” Its potent mix of guitars, percussion and saxophone sets the tone for the album. “Stop,” or as the cover refers to it, “Stop And Think It Over” brings in some trumpet work (along with some tambourines and guitars hanging out in the background). It has a wonderfully retro feel and if you pay close attention, music itself seems to tell listeners to “stop and think it over.” In “El Burro,” heavy guitar, percussion and trumpet work combine to show a Herb Alpert influence. The tone does mellow out a bit after the start, but I doubt anyone will complain given the greatness of the track. “Vamp Camp” starts off with bat sound effects, which lead to moody, slow saxophones, guitars, drums and even a surprise appearance by an organ. If you like the Moon-Rays, you’ll love this! The Krektones is the definition of “short and sweet.” There isn’t a single bad song in the bunch and my only complaint is how there aren’t more songs! 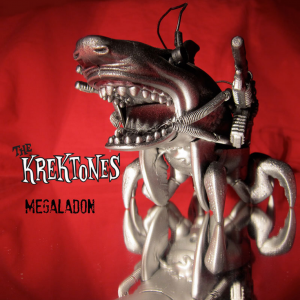 The band released Megaladon two years later and it’s every bit as awesome as its predecessor. The title track “Megaladon” uses a sweet percussion buildup and quick bursts of guitars to imply a Jaws-like shark attack. Judging from the shark creature on the cover, this seems to be a reference to a mutated Megalodon. The speedy guitars create a sense of something massive speeding under the waves. The drums and trumpet work are also not to be missed and the naval sirens at the end were the perfect touch. “Krekstar-1” is soft ‘n mellow at first, but picks up from time to time. I appreciated how the band used interesting guitar effects used to create an “outer space” feel rather than simply use a theremin. “Eradicator” has a drum buildup like many a surf classic. It’s fairly loud, it’s pretty speedy and it’s a definite must for your playlist! I especially love the ending buildup (despite not ever wanting the track to end). “Sinister Urge” takes its name from an Ed Wood movie and is appropriately moody and dramatic. It’s like something you’d hear in an old crime drama. If you close your eyes while listening, you’ll soon find yourself driving in a patrol car. But since this is inspired by Ed Wood, things sometimes take a turn for the wild.

Both albums prove the Krektones are not your average surf band. Each album is catchy and never wear out their welcome. I’m also happy to report they’re still touring and urge you to check them out if you get the chance to. If you can’t, pick up their albums. You won’t regret it. Here’s hoping the Krektones will unleash more amazing albums in the years to come.

Special thanks to the Krektones for use of the images!

Bad Behavior has blocked 1845 access attempts in the last 7 days.