The Edge of Time 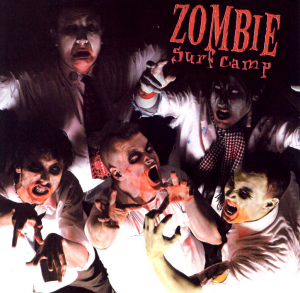 Not much is known about Zombie Surf Camp. The basic details are that the band formed in 2005 in San Diego, California and its members consist of:

Now would be a good time to point out that “vox” is short for “vocals.” The band’s official Facebook page claims their origins lie in a group of surfers who accidentally got caught up in a nuclear waste spill on a beach near the San Onofre nuclear power plant. Their self-titled debut album was released on Halloween in 2009, so you know I had to check that out.

Zombie Surf Camp opens with an incredibly catchy little ditty called “What’s Eating You?” The titular question is practically howled throughout the track. The band’s punk influence is obvious thanks to the guitar work (not that I’m complaining, mind you) and the use of reverb reminds us this is still a surf song. Appropriately retro-style guitars and oddball effects set the tone for “Flipper,” whose lyrics tell of dolphins killing humans due to pollution. “Sewage” features narration in which Resin A. Gain encourages Moon Zoggy to discuss things he hates. Its speedy, reverby guitars are joined by great drum’n percussion work which leads into the guitars and theremin work of “Surf Zombies R Go!” You have to listen to “Corpse in a Barrell” (sic). NOW. It both piles on the reverb and displays some amazing guitar work. It’s the closest the band comes to an instrumental in this album, with Moon Zoggy’s throaty “Goldthwait Growl,” laughter and other interjections replacing the lyrics you’ve come to expect. The catchy “Now, I Am a Zombie” details the radioactive origins of the band. It’s got guitars, percussion…you know the drill. It even has some theremin cameos, too! “The Kelpie” features fast and heavy guitars mixed with crashing cymbals. I couldn’t make out the lyrics, but assume
they’re about the mythical Scottish creature the track is named for. After all, the lyrics for “Midnight Sun” are about the land associated with the natural phenomenon. It’s heavy on percussion and that’s not a bad thing! “Surf Zombies on Parade” starts off fast and furious, but slows down the guitars, adds some reverb and gives the drums an almost reggae-like feel. Even the singing slows down to a conversational feel! But this is Zombie Surf Camp we’re talking about, so things pick back up pretty quickly. Both singers get to showcase their skills in “Culture of Life,” which also displays some great keyboard and musical effects. “Remains” opens with some slow, moody guitar work and has an interesting militaristic drum break. Sadly the lyrics are a bit hard to understand in this (and other) tracks. Similarly, “Wet & Wreckless” has moody and slow retro-stlye opening and I did have some trouble understanding some of the lyrics. Thankfully, I was able to understand enough to realize this was about the victims of a female zombie stalking a beach. The backing zombie groans and the humorous surprise at the end were perfect touches.

Minor nitpicks about lyrics aside, Zombie Surf Camp has a lot going for it. It’s got captivating performances, an awesome blend of surfpunk and plenty of amazing endings to tracks that you don’t ever want to end. In addition to its original CD release, Zombie Surf Camp put it up on Bandcamp as a “Name Your Price” download, so you have no excuse not to give this a try. Speaking of Bandcamp, let’s look at the other album they put up there! 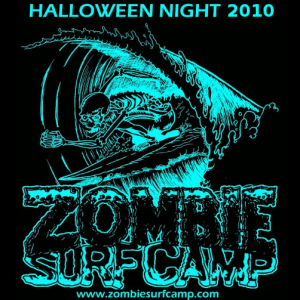 Halloween 2010 Live consists of live versions of selected material from the above album and their 2010 release Reefbiter. I think you can figure out when they released this particular album. “What’s Eating You? (Live)” is longer than original and proves once and for all that I need to see Zombie Surf Camp perform live. Somehow they managed to make their music even more mind-blowingly awesome and this time I had no trouble understanding the lyrics. This would also prove true for the majority of the album. Moon Zoggy’s introduction to “Zombie Twist (Live)” is killer and the song as a whole blew me away. I can only imagine how the crowd reacted to this. “Wet & Wreckless (Live)” is shorter than original, but that might just be due to its superfast music. It should be noted how they slightly toned down the lyrics for the live performance. “Don’t Run (Live)” is a new personal favorite thanks to its pacing and heavy opening guitar work. “Monster (Live)” features some blazing fast guitars combined with drums ‘n cymbals for one hell of a ride. The lyrics to this were admittedly a bit hard to understand, but that doesn’t stop the song from kicking ass. “Disco Diablo (Live)” changes things up with creepy guitars and some interesting musical variations. You might remember this from our 7th anniversary episode and there’s a reason it was selected for that episode. It’s because it ROCKS! However, it seems to cut off someone talking when the track ends. But, to be fair, it’s a free album so it’s not like I can complain a lot about that and not look like a total douche.

I liked their first album but I LOVED Halloween 2010 Live with every fiber of my being. It’s a Halloween treat better than any candy bar and you owe it to yourself to pick up a copy! Here’s hoping Zombie Surf Camp has more albums in the works. Now excuse me while I go check their tour schedule…

Special thanks to Zombie Surf Camp for use of the images!