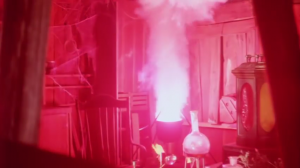 There are countless people who were suspected of being Jack the Ripper. Now it looks like there are different drinks bearing the name of the legendary serial killer, as evidenced by 1001Cocktails’ “Jack the Ripper Cocktail” and Bar None Drinks’ “Jack The Ripper #2.”

Speaking of legends, the “Wyooter Hooter” recipe at DrinkInHand has quite the story behind it. Jack Daniel’s created the drink as part of a Halloween promotion, complete with merchandise. Although I initially suspected the monster the drink is named for was cooked up by Jack Daniel’s marketing department in the 80’s, a reference to the Wyooter can be found in Joe Clark’s 1971 book Lynchburg. So perhaps the humble Wyooter is actual “fearsome critter” like the Snallygaster Or maybe it just means it’s 70’s fakelore. I don’t know. All I can say for sure is how the company has been known to revive said promotion every so often.

The Spruce Eats’ “Black Cat” would make a good companion to any witch (of legal drinking age). The Flavor Bender’s “The Witch’s Heart,” FYI Television Network’s “Witch’s Stocking” and HGTV.com’s “Witches’ Brew.” Just be sure to be very careful since “The Witch’s Heart” uses dry ice. Since “Witch’s Brew” is described as having a “Caribbean kick” in its recipe, why not serve it alongside Rated R Cocktails’ “Hula Ghoul” and Common Man Cocktails’ “Dead Doug” at your next spooky shindig?