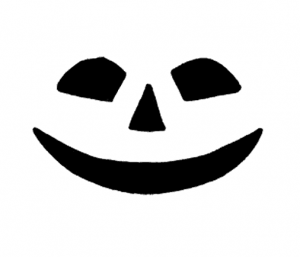 It’s been many years since the last collection of free pumpkin carving stencils was posted here. So you’d think it would be a piece of cake to come up with a new batch, right? Wrong!

I even tried hitting Google Books to see if I could find any vintage examples. Although the “stencil” I found in Volume 7, Issue 8 of The Kindergarten and First Grade was intended for use with a construction paper figure, I was able to alter it into the stencil illustrating this article. Surprisingly, it wasn’t a matter of just erasing the pumpkin shape and changing each part of the face black with a few mouse clicks. Doing that still left white outlines which had be be carefully erased and filled in. Additional cleaning up to remove blemishes was also needed. But since the end result only works for small pumpkins, I had to keep searching. Traditional Jack O’ Lantern faces seem to have fallen out of favor, as many free temples are just logos or symbols. These stencils from NASA are a great example. Thankfully some people are still making face templates, like michael-myers.net’s stencil which replicates the Jack O’ Lantern seen in the opening credits of the original Halloween. Here are the other free stencils I was able to dig up:

I should explain the Pumpkin Masters link. It’s actually a link to an album on the company’s Facebook page and you don’t need to click any of the links in the description for each stencil. Instead, click on the image of your choice and right click once it fully loads. Then select “View Image.” Then use your browser’s magnifying tool to get a full sized version of the stencil to print out. I should also note how some of the stencil links were previously used in the “Tricks and Treats” article series. Those articles are worth seeking out due to all the other coll stuff they contain.

As noted in previous “How-To” posts, Gravedigger’s Local 16 is not to be held responsible for the content on or anything that may occur (be it good or bad) as a result of visiting or downloading from any links on those sites (or constructing a project that’s detailed on them). Attempt at your own risk.

Bad Behavior has blocked 3315 access attempts in the last 7 days.