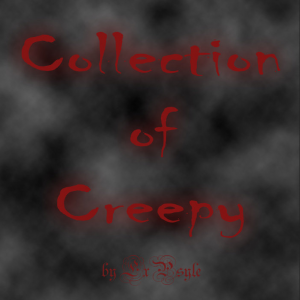 ExPsyle (pronounced “Exile”) is a composer who has been creating music since 2013. She creates royalty free music since she recognizes how independent game developers, filmmakers, YouTube channels, etc. might not have enough money to license music or commission custom soundtracks. All she asks is that you give her proper credit after you purchase and use her work. But she is available to compose custom material for those who can afford it, which is why some of her albums aren’t available for royalty free use. Her work has appeared in several video games, including Fox Detective, Rain Clouds, Princess of Ruin and Afternoon in Depression. I can’t find any evidence that her work has been used in haunted attractions, despite ExPsyle specifically mentioning the possibility of using her work in haunted houses on the Bandcamp page for Collection of Creepy. It’s time to change that…

“Cold Breath” combines slow, chiming bells (which might remind you of a music box) with otherworldly backing touches. Said backing touches change to compensate for the track’s steady backing beat. Some parts sound kind of like gusts of wind while others sound like cries or vocals. So why not use it in a room set up like a haunted nursery? Having a hidden oscillating fan blowing the curtains would be a great touch. The low pulsing tones of “Coming After You” ooze darkness and dread and creates feelings which live up to its title. Since some parts remind me of a chiming grandfather clock, let’s recreate the sinister chamber from Edgar Allan Poe’s “The Masque of the Red Death.” Hanging black fabric all over the room is simple enough, but the story’s braziers of fire projecting light through panes of red glass will have to be replaced with fake flames and temporary walls with red plastic windows. Creating a prop grandfather clock is nowhere near as difficult or expensive as one might think. Just be sure to paint it black too. The flickering lights will keep it from blending in with the background. I recommend having the Red Death sneak up on visitors while they’re inspecting the clock, but you could modify the clock so a performer can leap out of it if you wish. The costume for the Red Death can be a black hooded robe covered in “Creepy Cloth” and the mask can either be a corpse mask painted red or one of those red metallic masks which flood stores every October. Don’t forget to sprinkle on some fake blood! “Deep In Chaos” offers eerie low tones from beyond while “Resonant Evil” picks things up slightly with an undercurrent of evil. Its increase in volume wonderfully implies something has been summoned, so it’s a must for a séance. It also flows nicely into “Something Powerful Approaches,” which delivers the feel its name promises. You could even use this as a substitute for a distant storm approaching if you play it at a low volume. “8-Bit Vampire” is a surprisingly happy keyboard track. The contrast between the backing music and main beat is nice, although it’s not very scary. But it is a great track to switch over to if kids find the other music too scary while they approach your front door on Halloween. “Brooding Saint” is a wonderfully creepy organ composition. There are plenty of variations and is a more lively than your standard “haunted organ” track without sounding too happy. I love its very rich sound. This and a strobe light will make any static phantom organist prop seem more alive. I only wish it faded out rather than suddenly stopping. That way it would be much easier to loop.

But don’t let such a minor quibble keep you from picking it up, as Collection of Creepy is worthy addition to any haunter’s music collection! It’s not the only ExPsyle album with spooky music! With that in mind, let’s take a look at Music Box Melodies. 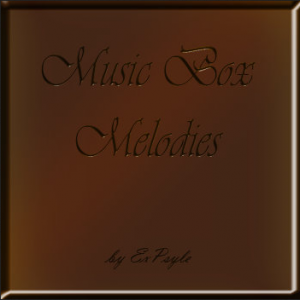 The soft and gentle chiming of “Only I Remember” is much different from the sort of music box effect one often hears on scary ambient albums. Then again, this isn’t that sort of album and this isn’t scary. Pleasant, yes, but not scary. Using a soft piano backing was a great touch. Now would also be a good time to note the album came into being while ExPsyle was experimenting with potential theme music for a friend’s game. So while the album has some music with obvious haunt potential, several of the tracks are relaxing tunes you can listen to outside of haunting. “Once Upon A Time” is softer and slower than previous track, but does offer another mix of music box and piano work. It has a somewhat sad feel and offers a sense of something being far away. Just imagine entering part of a haunted house set up to look like a creepy room or haunted attic, complete with a music box on a desk or end table. Suddenly the music box begins playing and a rocking chair starts moving by itself. “Mythical” is just as soft as the previous track…at first. But it quickly offers louder chiming and a somewhat fast pace. It also establishes that the rest of the album will consist of music box melodies without a piano backing. “Just Slightly Mad” gets things creepy with its off-kilter circus melody. I especially like how it conveys the “just slightly” part of the title. It also has some great variations. It can be used with either a spooky circus or haunted nursery. “Once Innocent” is much more lively than other tracks while “Wind-Up Waltz” is a very complex and impressive music box tune. This could easily work in a circus room. In fact, some of it reminds me of a ride on a carousel. But since haunted carousel ideas are in short supply right now, play it as you send people through a sinister fun house. Creepy clowns can menace your guests as they traverse the rickety floor, endless hallway and checkerboard room. Creating a hall of mirrors isn’t as hard as one might think. Make sure to have a false wall with a hole cut in it that has an empty mirror frame mounted over the hole. That way a clown can mimic peoples’ movements and leap out at them. Make sure this is directly across from the exit, as you don’t want scared people accidentally running into anything. If you play this outside the walls of the fun house area, it’ll sound like there’s a carnival running outside. If you purchase the full album on Bandcamp, you also get two bonus tracks: “Just Slightly Mad” mixed with unsettling atmospheric effects and “Mythical” with beautiful oboe music woven in. The pleasant tracks on this album do have some haunted potential if you have the right electrical skills. Picture a room with elegant furniture and décor. As tracks like “Once Innocent” or “Mythical” play, a narrator or tour guide discusses the tragic fall of a once happy family. Both the music and lights fade down, only for “Once Upon A Time” or “Just Slightly Mad” to fade in. Since certain items have been painted with glow-in-the-dark paint which looks clear when it dries, portraits and statues will suddenly have eerie faces or skeletal features. Having a black light handy will make the painting process much easier.

Both Music Box Melodies and Collection of Creepy are excellent additions to your library of haunting music. But that’s only if you download them, as CD versions are not available. The tracks are long enough to be looped individually and Collection of Creepy can be played on repeat while dispensing candy to trick-or-treaters. Some might opt to leave out “8-Bit Vampire,” but I can see the benefit of including it if you receive lots of very young visitors on Halloween. I imagine most will pick and choose selections from Music Box Melodies rather than play it in full. Those not planning on using select individual tracks should keep in mind that each album is around 13 minutes long (counting the bonus tracks). I noticed something interesting about ExPsyle’s recent non-horror release: Orchestral Journey, Pt. 1. It includes alternate “looped” versions of track which were designed with individual looping in mind. This gives me hope she will do the same with future spooky compositions. Speaking of which, ExPsyle hopes to release Collection of Creepy 2 by the end of the month!

Special thanks to ExPsyle for use of the images!