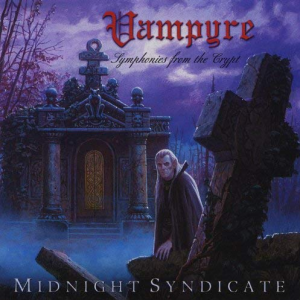 Midnight Syndicate is currently performing in their live “Conspiracy of Shadows” show at Cedar Point’s “HalloWeekends” event. Not only will they be performing several shows every Friday, Saturday, and Sunday through October 28th, but you can meet them afterward to take pictures and get merchandise signed! It wouldn’t surprise me if many fans bring copies of the band’s early album Vampyre – Symphonies From the Crypt, the artwork for which was created by famed Dungeons & Dragons artist Keith Parkinson.

The uneasy opening of “Awakening” uses soft wordless vocals and tapping to slowly build up to crashing gongs. Said gongs bring in a sweeping, regal feel and the pipe organ work brings classic Hammer horror movies to mind. The use of bells and horror movie stings further enhanced the mood. This could easily be used in a haunted throne room, vampire’s lair or even the opening room of a haunted house with a vampire theme. “Graveyard” can be used in a graveyard or funeral parlor scene thanks to its moody low opening and soft light touches which lead to mournful string work. The touches of wordless female vocals are greatly appreciated. Its great ending build leads to “Unhallowed Ground,” where the loud crash of a gong snaps listener out of mood from the previous track. More gongs, wordless unisex vocals and piano work soon follow. Amazing organ work takes over for a spell, but the other touches soon find their way back in. It’s spooky and epic, with plenty of great piano variations. A pipe organ solo gets more variations and is joined by new wordless unisex vocals which react to musical changes. The overall effect is simply breathtaking. “Crypt of the Forsaken” begins with a low creepy tone and gongs. Wordless unisex vocals and string work joins in, although I should note how the wordless female vocals are easier to make out than their male counterparts. The overall feel is pounding and steady. If you have a vampire’s crypt in your haunt, why not use a variation of the “girl to gorilla” illusion? Guests hear a vampire hunter yell for someone not to do something just before they enter and see a vampire’s lackey pull a stake out of a decayed vampire’s chest. As the lackey struggles with the vampire hunter, the prop corpse (or skeleton) suddenly changes into a fully restored vampire! Naturally the guests will be chased into the next room. It turns out that “Winged Fury” is one Gavin Goska’s favorite tracks and is “broken into different movements revealing different sides to this creature of the night.” The clashing cymbals and driving violins get the listener hooked before it occasionally adds in soft gongs, an interesting harpsichord effect and other musical tones I can’t quite place. Wordless male vocals can be heard in the distance add to the feeling of something stalking and flying about in pursuit. Wordless female vocals join in for a nice contrast with the variations in the wordless male vocals. I loved the focus on violins at one point and how it added creepy musical strikes later on (which were enhanced by more wordless vocals). You simply have to experience this for yourself. Haunts with a vampire theme could use this in a bat cave, but haunters using other themes might want to consider pairing this track with zombie birds.

The unnerving harpsichord and dark musical backing tones of “Blackest Rose” are coupled with violins. A heavy breathing sound effect briefly makes a surprise appearance and the bells nicely compliment the string work. More breathing comes in later before the soft wordless unisex vocals and musical flourishes enter. We get more bells and wordless female vocals get more prominence towards end, along with a few harpsichord solos. The track’s title reminds me that artificial black roses are a great touch for many spooky haunt scenes, vampire-related or otherwise. The same goes for dripping fake candles. If you’re using a vampire theme, be sure to paint some of the candles red and black too. If you don’t own any electric candles, they can be made from painted cardboard tubes. Just be sure to cut some divots in the top of the tube to create the impression your candle has been burning for awhile. Naturally, this happens after you make sure your artificial tealight can fit snugly inside the tube. But be sure to take the fake tealight out before you drip hot glue on the tube. Don’t put it in until after you have painted everything and let it dry out. After all, you’ll be painting inside the top part of the tube as well. Depending on the color you choose for the candle and the color of the tealight, you might either have to paint portions of the tealight or paint a cardboard disc with a hole in the center and slide it over the tealight. In “Ravages of Time,” a gong ushers in constant tolling bells, wordless male vocals and string work. Although the gong stops all that after awhile, it also brings in piano work and backing tones. Although strings and piano work take over, the other touches do return. “Catacombs” has a soft, moody buildup until some violins up the eerie nature of the track. There are super soft wordless female vocals at times and snippets of medium piano work as well. The overall effect is like wandering through a dark crypt or tunnel. It even works for any kind of spooky hallway or room. Graveyards are another possibility given how parts of it create a sense of mournful old memories. “Unseen Eyes” has amazingly unnerving violin work at the beginning, but a gong brings that to an end. Plodding, pounding drums sound like footsteps and string work makes it even creepier. However, the pounding feel stops towards the end.

“Undead Hunters” feels driven and dramatic thanks to its string work and touches of soft wordless unisex vocals. Gongs and snippets of drumbeats create a sense of danger and pursuit. The drums take on a marching beat and wordless unisex vocals get more prominence before the gongs close things out. This track gave me a fantastic idea for a vampire hunter room. It could be the first room, if not the waiting area, of a haunted attraction with a vampire theme. A vampire hunter can either act as a tour guide (either to get killed or temporarily separated from the group) or act as if visitors had answered their ad for assistants for a dangerous rescue mission. After all, why else would a vampire hunter go to a vampire’s domain while they’re still awake? Your visitors can enter an old study filled with various fake weapons and other tools of the trade. A vampire skull can sit on a desk and a display table can be filled with pulled fangs and a plastic bat skeleton. A mummified fairy prop can be turned into a “juvenile vampire” specimen with a few changes and a modified toothpick “stake” in its chest. Cut cut off on end of the toothpick and treat it with some wood stain. The same miniature stake trick would also work with a rubber bat. Naturally a vampire hunter’s kit would be present and a prop book of spells could easily be changed into a guide book on vampires. Although the Google Books preview for Lynne Mitchell’s How to Haunt Your House, Book Three is incomplete, it still offers a wealth of ideas for vampire hunter props. The book’s website also lets you print out special pages for their kit’s suggested books too! A harpsichord leads to heavy string work and wordless unisex vocals in “Ancient Tomes.” A gong and vaguely Jaws-like music help create a sense of danger and falling, so this track can be potentially used with a bottomless pit. After some distant bells, the harpsichord gets a solo of sorts until the feeling of danger back with a vengeance. I loved the rise in both music and vocals for its finale. The wind and very soft build of light piano work which brings “Dusk” to a start is mixed with wordless female vocals, moody tones and the sounds of digging. Some string work adds to the overall feel. This screams to be used in a graveyard with an animatronic gravedigger. But if you don’t have one, having this track play from behind a mausoleum or large memorial prop in your graveyard will make it seem like a gravedigger is working where people can’t see. “Spectral Masquerade” offers great variations in its use of slow piano and gongs. Wordless female vocals and tolling bells join for a dance of the dead. Soft pianos and strings take over until gongs liven things up. It’s a natural for a haunted ballroom scene and you can make things even creepier by including a spooky chandelier and skull sconces in the ballroom. The lengthy “Vampyre” begins with blowing winds and soft wailing female vocals. But as soon as the gong strikes, the women start singing in Latin! Strings and tolling bells join in once they stop. The pounding musical buildup and gongs takes on feeling of menace and pursuit before wordless male vocals and organ music usher in the track’s incredible last leg. A wonderful finish to a wonderful album!

Vampyre – Symphonies From the Crypt is a must have for all haunt enthusiasts and Halloween lovers. Like the supernatural beings which inspired it, it has multiple forms: CD and digital download. Both the album and its individual tracks can be looped with ease. This is great news for those who wish to create a foreboding atmosphere while handing out candy on Halloween. But there’s even more great news! Midnight Syndicate has announced they might be “unearthing” the special remix EPs they only gave out at album release parties. This decision was caused by the rediscovery of the Remixes From The Crypt CD from the Vampyre – Symphonies From the Crypt release party!

Special thanks to Entity Productions for use of the image!