Music to Haunt By: Verne Langdon 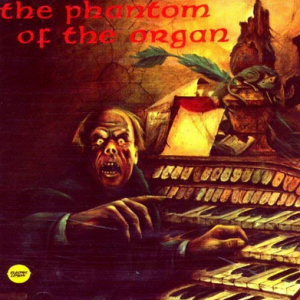 Verne Langdon had practically done it all before passing away in 2011. He had worked in television and movies, he ran a wrestling gym and created countless monster masks for the legendary Don Post Studios. In fact, he once co-owned that particular company! As someone who started practicing music as a child it was only natural that he would end up creating numerous albums for labels like Dejavu Record Company and Electric Lemon Records (the latter of which he ran with his friend Milt Larsen). There were releases filled with romantic music, comedic tunes from his “Johann Sebastian Bork” character and, yes, he got to indulge his love of the macabre many times. Verne Langdon was sort of a one man Midnight Syndicate in his day. In addition to the subjects of this article, he also created themed albums like Music for Magicians, Halloween Spooktacular and Dr. Druid’s Haunted Seance. That last album acted as both the soundtrack to and instructions for a theatrical séance, complete with haunting voices from beyond! Although these vinyl releases were sold in stores, many know them from their appearances in the “Captain Company” ads which appeared in countless magazines from Warren Publications during the 70’s and 80’s. Selections from his various albums have appeared on the radio and on numerous television shows and his spooky music has appeared in numerous professional and home haunts across America. After a lengthy hiatus from that genre, he eventually returned with Music For Zombies and Music For Dead Things in the early 2000’s.

The story of how The Phantom of the Organ and its kin came to be is an interesting one. The year was 1972. Milt Larsen and Verne Langdon were having drinks at the Magic Castle and discussed how their 1967 album An Evening with Boris Karloff & His Friends had been pulled from the shelves due to licensing issues over movie clips, which were apparently caused by a lawsuit between Bela Lugosi’s heirs and Universal. They had been unable to regain control of the album at the time and decided to create their own album of scary music. As Langdon has provided the music for An Evening with Boris Karloff & His Friends and the backing music for the Magic Castle’s Houdini séance, he was a natural choice to create the music for their new project. The decision to create an entirely original collection of music for Halloween was commendable considering how many “Halloween albums” of the time were content to reuse material over and over again. The only reuse here was how it was recorded at the same studio and on the same Wurli-Morton pipe organ used for the séance! The release was a smash success and fans quickly requested more albums like it. The rest is history.

I love the creepy introduction to “Horror of Erik.” It’s a perfect blend of moody organ work and other instruments (along with some soft moaning). Not only does it provide something you can use instead of “Toccata and Fugue in D minor” in your phantom organist scene, but it also sounds like something you’d hear as the theme to an old horror anthology show! It’s also a neat reference to the Phantom of the Opera. “Depression” has an eerie buildup which transitions into low, slow organ work. It admittedly sounds bit like something from an soap opera at times, but that could be said for many of the organ tracks. “Symphony of Death” starts off powerful and heavy, only to tones things down later. However, the sense of unease is always present. That’s why I think it’s perfect for any haunted house’s funeral home. The organ work in “Dementia Macabre” might begin with a soft, lurking feel but it picks up soon enough. The track certainly lives up to its name and would fit in with any spooky room. It’s also a great opening track for the first room of an attraction themed around a haunted mansion. The moaning and moody tones of “The Devil’s Love” are like something out of a dark soap opera. “Sound Trip Through the Catacombs” is the album’s longest track and runs over 8 minutes! The listener can hear the sound of a horse-drawn carriage on cobblestones, along with talking people and soft music. But then the Phantom of the Opera strikes! His heavy breathing and evil laughter immediately cause a commotion and he’s soon heard running through a wet catacomb to escape. Although the authorities can be heard, this doesn’t stop the Phantom from terrifying more people. There’s even some storm sound effects thrown in for good measure! Play this softly in some catacombs of your own when guests exit your phantom organist setup. That way it will sound like the organist is out wreaking havoc in elsewhere while looking for your guests. “Echos of the Organ” closes things out with some epic “bad dream” music and spooky organ work.

Listening to The Phantom of the Organ was something of a revelation. Hearing music played on an actual pipe organ rather than the simulated or keyboard-based “organ music” demonstrates just how much more effective the “real deal” can be. As the album isn’t enough to fill a full CD, we also get a special bonus: The Vampyre at the Harpsichord. But being on the same album does prevent one from seeing its London After Midnight-inspired cover art. An ad placed in the Famous Monsters 1974 Convention Program Booklet referred to the character as “Draculon,” which is a reference to the planet where Vampirella hails from. Considering how Forrest J. Ackerman created the character for Warren Publications and wrote the liner notes for many of Langdon’s albums (including the ones covered here), one has to wonder if it was his idea to reuse the name.

The slow, plunking tones of “Nocturnal Quest” demonstrate just how ancient and regal a harpsichord can sound. Mr. Langdon certainly knew how the make the most of the light and heavy tones that particular instrument could produce. It’s appropriate for haunted castles and vampire tombs alike! But if you decide to use this with a vampire’s lair, here’s a cool scare idea to go with the song. Have a vampire lying in an ornate coffin with a dead vampire hunter sprawled on the floor. The opened vampire hunting kit and stake on the floor next to the body indicate will help sell the idea nicely. Naturally, visitors will expect the vampire to rise from the coffin to scare them. So imagine their surprise when the vampire hunter starts twitching and kicking! The vampire hunter’s corpse can either be a motorized prop or a masjked helper disguised as a lifeless prop. This scare works best in an area where people have to walk by rather than walk through and you should put up spider webs or some sort of barrier to keep people from getting to close to the props. But just to be on the safe side, make sure the stake is a foam prop. The atmospheric introduction to “Ode to the Tomb” gets really creepy really fast due to its alternating heavy and light tones. There’s so much menace from so few keys played! “Eternal Life Suite” has a subdued but spooky feel and it’s actually quite pleasant to listen to. Why not use it for a misdirection scare so you can catch guests with their guards down? Although “Carnival of Souls” has a haunted circus feel, its being played on a harpsichord does potentially open it up for use elsewhere. A ghostly ballroom immediately springs to mind. But if you want to stick with a circus theme, try making an evil monkey prop rather than a creepy clown just to keep things fresh and interesting. “Flight of the Vampyre” is speedy and jaunty. It has an almost “Latin” feel at times and would be a perfect match for a spooky masquerade ball. “Moonspell (trance)” is soft, peaceful and beautiful…so seems rather out of place at first. But imagine it playing in a room decorated to look like a courtyard in a haunted castle! The gargoyles might arouse suspicion at first, but the calming music and fireflies in the darkness would provide a great distraction. Said fireflies are actually small pieces of black construction paper (or plastic-if you stage it outdoors) with a dot of glow-in-the-dark paint on one side. They hang from various lengths of black thread and a hidden oscillating fan will make the fireflies seem to fly around and blink! It’s up to you to decide if one of the gargoyles will come to life or if you’ll immediately hit guests with a scare when they enter the next room. “Undead Theme” has a soft and spooky opening buildup and takes on a vaguely marching feel at one point. “Waltz of the Ghouls” is another jaunty and lively track with a very mild spooky feel to it. You can easily slip it into your Halloween party dance playlist and nobody will mind!

Both The Phantom of the Organ and The Vampyre at the Harpsichord are absolutely musts for any Halloween or horror fan’s collection. Even if you don’t use them in a haunted house, you can still play the albums as you hand out candy on Halloween in order to add a classic gothic horror feel to your home. All the tracks are long enough to loop individually and their ability to flow into one another also makes looping the entire album of your choice much easier (with the possible exception of “Sound Trip Through the Catacombs,” but that depends on your spooky setup). From what I can tell, the initial release of the CD version was a factory-pressed disc but I also noticed how Amazon only offers new copies of other Langdon albums as manufactured on demand CD-Rs (in addition to the digital download versions). I’m not sure what type of disc you’ll receive when you order from Verne Langdon’s website but you can always ask before buying. There’s also plenty of interesting exclusive goods over there, including the Verne Langdon’s Halloween Collection boxset! If you want to wow your friends with live music at your next Halloween bash, be sure to grab a copy of the sheet music for The Phantom of the Organ and The Vampyre at the Harpsichord over at LA Fear!

Special thanks to Electric Lemon Records for use of the image!