Make Your Own Man-Eating Plant 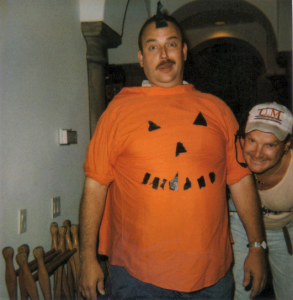 The above improvised pumpkin costume by Will Hart (better known as CthulhuWho1 in some circles) shows how one can create a great costume without spending a lot of time or money. Personally, I recommend wearing a green knit hat or headband with a “stem” attached rather than taping one directly onto your head.

DIY Halloween Costumes has a plethora of easy costume ideas like a “Mail Stripper” and “Lady Bug.” But those aren’t the only easy ideas on Facebook! The Cult of John Carpenter shows how the right coat and headband flashlight can help you recreate an iconic horror poster and I think my mom’s gone crazy has a unique soda pouring costume.

The October 1975 issue of Ebony Jr. has a great tutorial about creating a starch mask and Rosie O’Donnell’s Crafty U has instructions on how to dress up as “Mummy Dearest.”

Make Fun!: Create Your Own Toys, Games, and Amusements by Bob Knetzger features an amazing “Steampunk Safety Goggles” tutorial. Those goggles would be perfect with the “Mad Scientist” costume from Ed Morrow’s The Halloween Handbook, which also shows alternate ways to be a “Ladybug” or “Mummy.” Joanne O’Sullivan Halloween has instructions for costumes like “Sir Burlap,” “Yuki Ona” and many more!

A Ghostly Good Time: The Family Halloween Handbook by Woman’s Day might be familiar to those of you who read my idea about converting their “Wizard” costume into a “Cthulhu Cultist” costume. In addition to having found another inspiring cultist costume picture, I also have more selections from the book! These selections include the “Crow,” “Three-Headed Four-Armed Monster,” “Frankensteins,” “Swamp Girl,” “Bat Boy” and “Garden Fairy.” Although the “Swamp Girl” link also shows how to convert it into a “Witch” costume, the instructions on turning “Bat Boy” into a “Dragon” and “Garden Fairy” into a “Clown” are available separately. You can save time and money by getting multiple Halloweens out of a single costume!

Seeing as how makeup comes first in the article’s title, I should take a break from costumes. StyleCaster shows how eyeliner can be used to create countless Halloween makeup designs while StayGlam offers easy Halloween makeup ideas. Moving on to gory makeup, Taylor Haze Keller demonstrates how easy it is to create disturbing effects using scar wax and acrylic teeth. wikiHow has tutorials on making fake wounds, fake blood without food coloring and realistic fake blood using chocolate syrup!

Getting back to costumes, Instructables can show you how to make a “Kidnapped Mermaid” (or Merman) costume, articulated angel wings and numerous costumes made from cutting up old tee-shirts.

Accusations of one’s opponent being a conspiracy theorist has been an especially popular argument in American political discussions this year. I imagine this will make eHow’s guide to making a tinfoil hat very popular among members of all political parties, but I think it’s more interesting to use it for your homemade robot costume designs.

Dinosaur Dracula’s “Deadsites” series has resurrected Kellogg’s “Spooky Town” website from 2000, so be sure to visit if you want to learn how to dress up like a “Pirate” or “Mummy.” I swear the instructions aren’t the same as the ones for the other tutorials I shared on the matter.

Finally, iLoveToCreate Blog has many costume ideas and Balmore Leathercraft shows how layering your costume can lead to incredible results.

The image illustrating this article was licensed under a Creative Commons Attribution-NonCommercial-NoDerivs 2.0 Generic License. The rest of the article is copyrighted by Gravedigger’s Local 16.

Bad Behavior has blocked 1748 access attempts in the last 7 days.