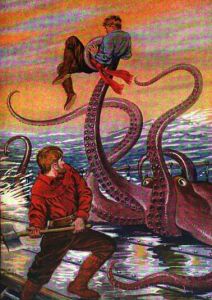 Alfred Tennyson’s “The Kraken” is not only a great poem, but it is believed by some to have influenced H.P. Lovecraft’s “The Call of Cthulhu.” Tennyson also wrote moody works like “All Things Will Die” and “Song (A spirit haunts the year’s last hours).”

Let’s return to the high seas with George Guyon’s marvelous untitled poem about a sea serpent sighting and “Dave” at aSmarterU’s untitled pirate poem which he created for a home haunt prop! And getting back to sinister serpents, Wikisource has all three versions of Emily Dickinson’s “A narrow fellow in the grass.”

Amazon’s preview for Halloween Howls: Spooky Sounds, Stories & Songs includes the Shel Silverstein classic, “Blood-Curdling Story.” The haunting “Can you tell me maiden fair?” can be found in the Amazon preview of Chris Lambert’s Tales from the Black Meadow. Ray O’Bannon is no stranger to this website, but this is the first time his poetry has ever been discussed here. The library at Ravensblight contains his numerous poems (which are marked with an icon shaped like a piece of paper), such as “Carve A Pumpkin.”

Stephen Brown’s Glitterville’s Handmade Halloween: A Glittered Guide for Whimsical Crafting! differs from other Halloween craft books in that each tutorial starts with a poem about the craft! So you can enjoy some verse and learn how to make some decorations when you read “Oh-So Wicked! Party Hat,” “Chenille Pumpkin,” “Halloween Candy Garland” and “ButterScream Frosting Ornament.”

Eerie occasionally printed poems submitted by readers, like “Poem” by Danny Massoni and “A Dragon’s Tale” by Brad Linaweaver. South Dakota Educator is another magazine which printed poems, although both “Jack-O-Lantern” and “Ghosts and Goblins” seem to be the work of an uncredited staff writer.

I’m feeling festive, so let’s read a pumpkin poem by John Agard, “Corn Maze” by David Barber, “It Must Be October” by Pearl N. Sorrels, “October” by Dale M. Hewlett, “Haunted” by Helen M. Hutchinson and “At Halloween” by an anonymous author.

In “Edgar Allan Poe,” Tom MacInnes paid tribute to the man responsible for several iconic horror poems. “Gravedigger’s Birthday” by B.J. Ward was impossible to resist given this site’s recent 10th birthday and Wilfred Owen’s “Shadwell Stair” is most eerie. Jared von Hindman’s review of Swamp Thing includes a nifty haiku and Ambrose Bierce’s ghost story “The Death of Halpin Frayser” has a haunting poem embedded in it.

Can you guess the secret connection between Lu B. Cake’s “Ghoses in the Barn,” Charles J. Leland’s “Howling of the Witches,” Johann Wolfgang von Goethe’s “Dance of the Dead,” Thomas N. Weaver’s “Jack-O’-Lantern” and the anonymously penned “Goblins” after reading them all?

Look Ma, “Hands” on Poetry by Adele Steiner collects numerous poems written by her students, including untitled poems about a black cat and aliens by Lennard Long and Anna Jepsen. “One Stormy Night!” by Natasha Moiseev and an untitled ghost poem by Aseem Peshwa are our next selection. We close things out with “Healing Mixture” by Hannah Jung, followed by “Spell Poem” by Caroline Torrey.

You can head on over to DLTK-Holidays for more Halloween poems and to Wikipedia to learn more about “Graveyard poets.”

Bad Behavior has blocked 1218 access attempts in the last 7 days.