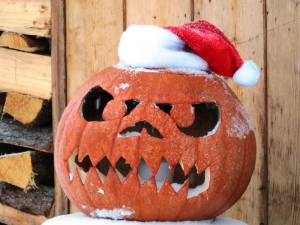 Reading ghost stories during the Christmas season is an old British tradition. But I think reading scary stories is just as valid. “Nackles” by Donald Westlake tells of a nasty counterpart to Santa Claus and “The Naughty Ones” by Lake Lopez also deals with things that are neither holly nor jolly. If you want more, you can check out the following stories from Gary Morton:

Two Sisters Crafting offers both instructions for making “Grinch Slime” and a recipe for “Grinch Popcorn.” They also have recipes for “Grinch Rice Krispies Treats,” “Grinch Rice Krispie Bites,” “Grinch Hearts Rice Krispie Treats” and “Grinch Rice Krispie Cake.” eHow’s article on “Grinch Party Food” has several great ideas but I think it’s lacking in the actual recipe department. So I dug up enough recipes to have a proper Grinch feast. Not only does I Heart Naptime have a recipe for “Grinch Cookies,” but Everyday Dishes has one for “Matcha Grinch Cookies” and Simplistically Living offers “Crinkly, Cranky Grinch Cookies.” The recipe for “Grinch Cupcakes” over at Sarahs Bake Studio is very different from the “Grinch Cupcakes” recipe from Confessions of a Cookbook Queen. Similarly, Momtastic shows how to make a “Grinch Cake” that’s very different from the “Grinch Cake” made by The Bearfoot Baker and the “Grinch Cake” from Gretchen’s Vegan Bakery. The “Grinch Skillet Brownie” from Foodstirs is different from the “Grinch Brownies” Kitchen Fun With My 3 Sons as well. Hungry Happenings closes things out by showing how easy it is to whip up some “Grinch Pancakes.”

But the Grinch isn’t the only character from the classic story with recipes! #Sweet shows how to make “Max Macarons,” Seussville.com has a recipe for “Who Pudding,” Allrecipes.com has a “Who Hash” recipe and Country Bob’s shows how to make your very own “Roast Beast.”

Now we need some festive drinks to wash it all down with. Cooking With Curls’ “Grinch Hot Chocolate” and the “Christmas ‘Grinch’ Lime Sherbet Punch” from Wishes and Dishes are appropriate for all ages. However, adults might prefer the “Grinch Drink” from Design Loves Detail or the multiple recipes for Grinch cocktails from The Spruce Eats. Both the 2011 and 2016 installments of “Christma(dnes)s” have additional Grinch food and drink recipes as well!

Free music downloads are also a popular part of “Christma(dnes)s” and this year is no exception! Nat Brower takes us “Surfing With The Grinch,” David Ritter celebrates a “White Zombie Christmas,” la-goons have sighted the infamous “Krampus,” Nollie Gettysburg watches the epic battle that is “The Yeti Vs. The Christmas Creature,” Julian Hol offers a theremin take on “Silent Night” while Overdue Exorcism observes both a “Silent Deadly Night” and “Black Christmas.” Brandon Boone has a wonderful creepy Christmas album called Nosleep Christmas 2017 which you can also snag for free!

The revived Suspense radio drama is offering free downloads of “Have a Hacking, Whacking Christmas” and “Hark the Deathly Angel Sing.” While we’re on SoundCloud, let’s check out Flowerpot Press’ streaming “Vampire Snowman Joke” and the unusual carol “Oscar The Light Headed Pumpkin.”

If you want more Halloween versions of Christmas carols, Haunted Bay has the lyrics for classics like “Humphrey The Blue Nosed Pumpkin and “Shivery Yells.” Haunt Your House for Halloween: Decorating Tricks & Party Treats by Cindy Fuller has lyrics for “The 12 Days of Halloween.” Google Books also has a cool preview for Rick Walton’s Frankenstein’s Fright Before Christmas and the preview for Grady Hendrix’s Paperbacks from Hell: The Twisted History of ’70s and ’80s Horror Fiction has some great covers for Yuletide horror reading. I noticed how the Amazon listing for Slay Bells lacks cover art and the one for Slumber Party has a completely different cover than the one Hendrix used! Thankfully the covers at the listings for Christmas Babies and Black Christmas are the same as they are in the book.

While I was on Amazon, I also found a Christmas toy that’s both naughty and nice and a Christmas album from the star of Rock ‘n’ Roll Nightmare (or The Edge of Hell if you’re reading this in Canada)! Roll Versus Coal is both a game in its own right and a complete source of dice for tabletop gaming fans who want some seasonal accessories. But since supplies of said game are limited, you might have to use a few dice from Lumps, the Elf Coal Game instead. It should be noted that game is a reskin of another game and doesn’t offer a complete set of RPG dice.

“Coal” dice would be a perfect match for the free In Nomine adventure A Very Nybbas Christmas. Both the preview of the In Nomine core rules and conversion guide for use with GURPS can allow those with GURPS Lite to play for free. But that isn’t the only freebie that’ll be of interest to tabletop gamers! Tales From The Savage Troll offers Christmas monster stats for Savage Worlds while d20PFSRD has both official and homemade Krampus stats for use with RPGs like Pathfinder and Dungeons & Dragons.

The image illustrating this article was licensed under a Creative Commons 1.0 License. The rest of the article is copyrighted by Gravedigger’s Local 16.