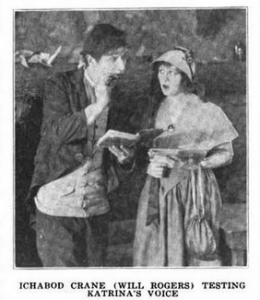 Washington Irving’s famous classic, “The Legend of Sleepy Hollow,” is being brought to the screen, with the inimitable Will Rogers in the role of Ichabod Crane, the lanky schoolmaster whose sentimental heart was not strong enough to combat the bewitching eyes of the fair Katrina Van Tassel, the belle of Sleepy Hollow.

Will Rogers not only looks the part of Ichabod Crane, but is the part, as he brings the schoolmaster of Sleepy Hollow back to life upon the screen. It is a bit of characterization that will live for many seasons, and the names of Will Rogers and Ichabod Crane will be inseparable ever after in the minds of those who see the production.

All the quaint realism of the great story has been preserved in this film version, and the original plot remains intact. There are few people, young or old, who have not read this classic by Washington Irving. It has been a fireside tale for a century. Realizing this, the Hodkinson Film Corporation have made every effort to present in the film every point of interest that is found in the story. The filming of this production was made upon the exact locale where the story took place—in the wooded and hilly section of New York State, which is still known as Sleepy Hollow.

We see the original church in which Ichabod is said to have taught singing, and there is a very rare picturization of the manner in which the old Dutch settlers held their services. The schoolhouse in which Ichabod Crane taught had to be rebuilt, but in this rebuilding great pains were taken to follow historical description minutely.

There is a decided treat in store for anyone who sees the W. W. Hodkinson version of “The Headless Horseman.”

[This post is based around an article included in the June 1923 issue of Social Progress (Volume 7, Issue 6). Although as much effort as possible was put into preserving the article as it originally appeared, some aspects of the layout were impossible to replicate. To see the original, head on over to Google Books.]

Bad Behavior has blocked 589 access attempts in the last 7 days.