THROUGH a change of plans decided upon late last week, in deference to insistent requests from many leading first-run exhibitors, the Famous Players-Lasky Corporation will release the Paramount-Artcraft super-special, “Dr. Jekyll and Mr. Hyde,” in which John Barrymore is starred, on March 28, and on that date the production will open an engagement at the Rivoli theatre, New York City.

“It was our original intention,” said S. R. Kent, sales manager, “to release ‘Dr. Jekyll and Mr. Hyde’ early in June, as a fitting subject to offset the slump in theatre patronage which usually makes itself keenly felt this time of year. But so many exhibitors had heard such great things about the picture and made known their desire to have it released now that I got into long-distance communication with Mr. Lichtman, with the result that we are releasing it immediately.

I have no hesitation in saying that the picture is not only the most perfect production made on the screen by John Barrymore, but it embodies the greatest acting contributed to the stage or screen by an American artist. Moreover, it is a remarkable example of what close co-operation can accomplish, for I understand that throughout its production the star was in constant consultation with Director John Robertson and Clara Beranger, who prepared the scenario from Stevenson’s work.”

A unique and intensely interesting plot has preserved for more than forty years the popularity of Robert Lewis Stevenson’s “Dr. Jekyll and Mr. Hyde.” When the novel was first published in a cheap shilling edition almost 250,000 copies were disposed of in a brief period, and today the strength of Stevenson’s literary reputation and popularity of “Dr. Jekyll and Mr. Hyde” are such that the book sales run into thousands annually.

Probably no other author has ever conceived a more striking theme than the transition of personalities. Urged on by the temptation to satisfy his evil desires in security, Dr. Jekyll, a kind, respected member of the community, experiments with chemical formulas until he can change his own identity into that of an entirely different being. Not only does the man change mentally and spiritually from his former self, but his physical characteristics are debased and blackened in the change to Mr. Hyde.

The vivid action of the story, which was published for the first time in the stern Victorian era, caused it to be classified as a “shocker,” and this was responsible for the cheap edition which marked its initial appearance. Subsequently its intrinsic merit as a work of literature was recognized.

It was a no less eminent authority than Lloyd Osbourne, step-son of Stevenson and collaborator with him in some of his later works, who having seen Mr. Barrymore’s Jekyll and Hyde in the Famous Players-Lasky projection room, declared: “Mansfield was the greatest Jekyll and Hyde of his generation without a doubt, but John Barrymore has gone him one better. It is doubtful if there will be another such portrayal in this generation or the next.”

The world owes a great debt to Mansfield, however, for it was he who suggested to Thomas Russell Sullivan the writing of a dramatic version of the Stevenson story, and it was first acted by him May 9, 1887, at the Boston Museum, Boston, Mass. The following September it was presented at the Madison Square theatre, New York.

The leading feminine role of Millicent Carew is taken by Martha Mansfield, the latest beauty to make her way into motion pictures via the Ziegfeld Follies. In addition to her great beauty, Miss Mansfield has acting ability far above the ordinary. She has played in numerous Broadway successes, notably “The Century Girl,” while in pictures she has appeared in all the Max Linder comedies and with Eugene O’Brien in “The Perfect Lover.”

Brandon Hurst, who plays Sir George Carew, is an English actor who is particularly gifted in striking character roles. As the district attorney in “Within the Law” and with Rose Coghlan in “The Sporting Duchess,” he laid the foundation for a successful stage career.

Charles Lane, an actor of long experience both on the stage and in pictures, has the part of Dr. Richard Lanyon, while J. Malcolm Dunn, who plays the lawyer, John Utterson, first found himself playing leads in Drury Lane melodramas. Subsequently David Belasco recognized his ability and obtained him for the Irish boy in “Sweet Kitty Bellairs.” Recently he has been seen in numerous Broadway runs.

Cecil Clovelly as Edward Enfield is accustomed to appearing in John Barrymore’s successes, as he also had a part in “The Jest” and had previously played with that star in “Justice” and “Peter Ibbetson.” 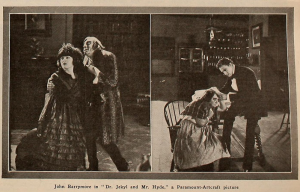 [This post is based around an article included in the April 3, 1920 issue of Motion Picture News (Volume XXI, Issue 15). Although as much effort as possible was put into preserving the article as it originally appeared, some aspects of the layout were impossible to replicate. To see the original, head on over to the Internet Archive.]