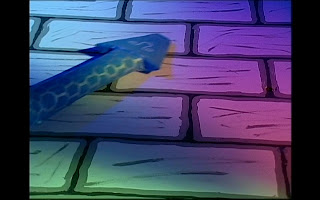 There’s a neat scene in ‘Premonition,’ the first of three stories in PuppeTose Theater’s Random Stories Grab-Bag. A dragon stalks the character Helgi, a soothsayer within a castle and despite there being no real frame of reference other than both are the trademark PuppeTose puppets.  Through choices in editing, the scene effectively conveys a heightened sense of drama in a short period of time with ‘actors’ that are nothing more than wires, strings and shaped pieces of painted newspaper and flour. 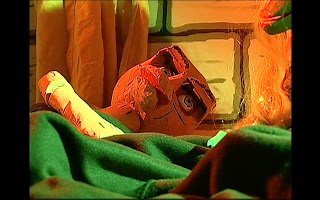 It’s the longer of the three pieces on ‘Random Stories Grab-Bag,’ but all three bear the trademark sense of ‘futile efforts in horrific world’ that one can expect from Ross Wilsey and his cabal of players of PuppeTose Theater. 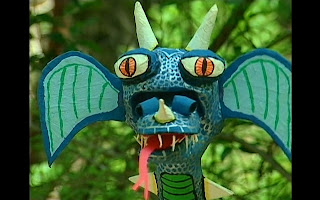 [I must mention that Ryan Wilsey has worked on every of the PuppeTose production (save for ‘A Question of Clean’) that I have viewed so I want to give mention to him, as not to somehow overlook him. Ross and Ryan Wilsey.]

It’s not considered a spoiler to say that there is no happy ending to ‘Premonition,’ unless the idea of everything burning and falling to filthy pieces of trash is your idea of ‘Happily Ever After.’ If so, you should probably send an email to us and see about writing for the site.

In a time after a civil war, the resistance failed to dethrone the King.  The titular premonition is had by the aforementioned Helgi during a dream. She warns her husband, Asgrim, that when he goes to meet his brother, Thangbrand, death awaits him in the woods. Prophesized that ‘no foe should defeat him,’ Thangbrand plans to unite with his brother and launch one final shot at regicide. But an element of chaos, a stalking dragon, seeks to destroy them all. 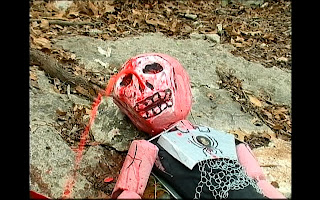 I find it an interesting tale since the King nor does any element of the Royalty come into play. Instead, the main antagonist is the nameless Dragon. I see ‘Premonition’ as a fable, or a parable involving the repercussions of an individual’s hubris and/or desires get out of hand. 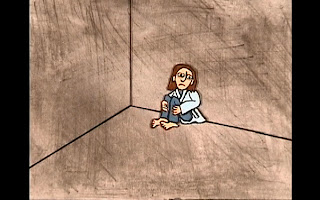 While PuppeTose is primarily, as you would rightfully guess, about puppets, Ross Wilsey demonstrates his talents as an animator with ‘A Question Of Clean.’ Detailing a patient’s breakdown involving his sense of bugs under his skin, the short animated piece puts together a surreal sense of illness with plague bugs that feast upon the flesh. The style of the animation is raw, very good for helping build the idea of, appropriately, uncleanliness to every character involved. 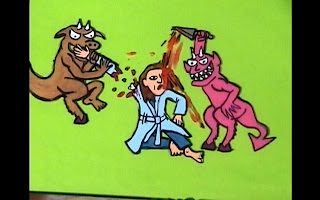 Finishing up is ‘A Full Life,’ which is admittedly (by the ‘lack of Plot’ listing in the credit) PuppeTose’s weakest outing. This isn’t to say that it’s bad; there’s just a noticeable lack of story in the short. PuppeTose has no problem with story, as seen in tales like ‘Valley of the Robots,’ ‘Premonition’ or even the ‘PuppeTose Street’ shorts. Wilsey & Co. can easily create a captivating tale. 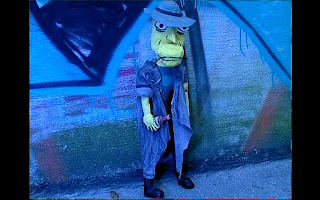 But ‘A Full Life’ is more of a three minute exploration of an idea—a homeless man, dead in the gutter, remarked to have lived ‘a full life’—than a story.

But once again, this isn’t to say that it’s bad. In fact, the shots taken with the PuppeTose puppet against the real world, especially night-time shots that seem to work around with limited lighting, kept me watching to the end. It was more of an artistic display that could express a sense of emptiness, in both the vagrant’s desolate life and in the final statement of the shithead couple who pass his dead body. 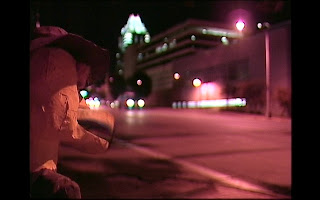 What you have in ‘Random Stories Grab-Bag’ is a trio of stories expressing the hollow futility of life and how ultimately, we’re all going to die and fester in the streets, our bloated corpses filling up the cracks until the scavengers pick our bones clean. YUM.

Bad Behavior has blocked 843 access attempts in the last 7 days.