It all started when Strange Jason sent me a link to “Gateways to Geekery” article about exotica music from the Onion AV Club. Not only was it a great, highly informative read (although the author is laughably wrong about the quality of modern exotica groups), but it made me realize the connections between exotica/Tiki culture and horror.

My realization of this was sparked by noticing how menacing the idols depicted on the cover for Les Baxter’s Ritual of the Savage looked. This got me to think of how masks play a big role in both fandoms and inspired me to do further research into the matter. I soon realized that exotica was not necessarily all tropical flowers and sunshine. There is a darker aspect focusing on the forbidden and taboo. There’s the shrunken heads of Arthur Lyman’s Taboo II, Robert Drasnin’s Voodoo series and songs (and album covers) involve frenzied pagan rites, weird cries in the night or strange stone gods on forbidden islands. Is the intended goal of bringing customers into an artificial environment filled with spooky sounds sought by the designers of haunted attractions really all that far off from the goals of those who make Tiki bars and put the animal calls in many an exotica song? And let’s not forget the popularity of “zombies” in both Tiki and horror cultures…

Some of you are bound to be asking yourselves questions like “What exactly is exotica,” “what is ‘tiki culture,'” and “how does the surf music fit in?”

It’s tempting to take the easy way out by linking to some very informative websites on the matter and then move on to the next review. Instead I’ll explain things by reviewing a CD/booklet combo by the renowned Tiki authority, Sven A. Kirsten.

The term “Tiki” refers to Polynesian carvings of roughly human shape (be they stone or wood, mask or figurine). As noted here, Reeds’ Concise Maori Dictionary even defines it as a “grotesque carved figure of a man.” Although I could use the “grotesque” definition to further the Tiki/horror connection, I won’t because I disagree with it. Tiki art is rather “off beat,” but is rarely what I’d consider “grotesque.” That said, I so see how the the idols depicted on the cover of “Ritual of the Savage” could meet that definition. Unsurprisingly, the source where I learned of that particular definition also chose to drop the grotesque part and used the definition “human-like images not only from Polynesia but from other Oceanic areas.”

The original symbols were often references to the legendary first man of the Māori (and other cultures’) creation myth, Tiki. However, some claim that Tikis act as identifying “flags” of sorts. Although these figures were brought overseas as souvenirs during the 19th century, they did not become truly popular until the 30’s-40’s. A variety of factors contributed to this. Donn Beach started the first “Don The Beachcomber” restaurant/bar in 1934, which gained fame (and other locations) due to its tropical drinks and Polynesian decor (including Tiki figures). Although some of the figures in the early establishments might have been authentic imports, most of the Tikis used were made in America. Its popularity spawned numerous other restaurants with similar food, drinks and decorations. The best known one is Trader Vic’s, which originally started under the name “Hinky Dinks.” Even before adopting the Tiki theme, the walls of Hinky Dinks were covered in unusual decorations in order to spark customer conversations due to owner Victor Bergeron’s belief that “lots of decoration causes lots of conversation, and lots of conversation sells lots of drinks.” A Caribbean vacation is credited as planting the initial seed of the tropical theme change, with visits to restaurants already using that theme sealing the deal. “Hinky Dinks” was renamed “Trader Vic’s” to fit in with the new style, the name inspired by the owner’s constant trading. “Don” and “Vic” both churned out innovations that have since become staples of Tiki bars worldwide such as Mai Tais, Tiki mugs, Zombies and the like.

The popularity of Tiki culture was furthered by those returning from the South Seas after being stationed there in World War II. They longed for the exotic sights and cuisine that had originally distracted them from the horrors of war. One returning naval lieutenant, James Michener, wrote the Pulitzer Prize winning book Tales of the South Pacific based on his experiences in 1948. This popular novel was adapted into the even more popular Rodgers and Hammerstein musical, South Pacific (which also won a Pulitzer). The Kon-Tiki expedition and Hawaii’s statehood also fueled people’s passion for all things tropical. Tiki bars sprung up all over the country and music was needed for them. Surf music was a good fit, but there was something even better suited. A genre that gained its named from a now-classic Martin Denny album: Exotica. Exotica music is designed to help the listener imagine they are in some faraway land, with animal cries and the use of “exotic” instruments such as güiros and chimes. As with all things that become a nationwide craze, Tiki culture eventually died down. It wasn’t until the 90’s that Tiki culture started to make a comeback. Aiding in the modern day revival were the excellent books on the subject by Tiki historian/expert Sven A. Kirsten. 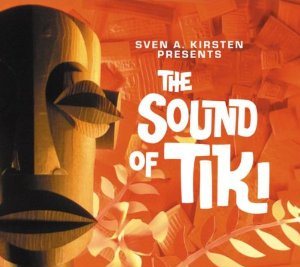 All of the above (and more) can be found in the 49 page booklet attached to the digipak holding the Sound of Tiki CD. The CD was originally planned as a bonus CD to be included in Kirsten’s The Book of Tiki, but the idea had to be dropped in order to keep the price reasonable. And just like the book that spawned it, you’d better believe that the CD’s booklet is chock-full of color pictures (be warned that some of the images contain nudity). There’s also a handy map of the “islands” surrounding the inlet of exotica music: surf, hapa haole and lounge.

Rather than just act as a condensed version of his two prior books, the booklet is actually set up in a way that (after a few introductory pages on the subject of Tiki and exotica) the notes for each track of CD give information both about the song and how it ties in with Tiki culture. I was particularly surprised to learn that in the unofficial competition to use the most obscure instruments among the world of exotica musicians, one album boasted of using an instrument said to be made from human bones! As for the tracks themselves, the CD’s selection of rarities and classics is enough to satisfy the hardcore Tiki fan while still being accessible enough to act as an introductory sampler for beginners.

The first track, Arthur Lyman’s “Taboo Tu,” actually has a horror connection, despite the pleasant tone. Kirsten notes that while hapa haole songs tended to be about romance, exotica focused on the mysterious and taboo. He even comments about horror imagery and primitive cults!

Next comes a song from another master of exotica, Martin Denny. Not only is “Aku Aku” a delightful song, but its page in the booklet explains how the name ties in with many Tiki establishments and explains how Moai (aka Easter Island heads) got mixed into Tiki culture. Gloria Lynne’s performance of “Bali Ha’i” is not only included since it came from the play South Pacific, but also because it showcases the idea of a friendly and welcoming exotic isle of delights that is so popular in exotica music/Tiki culture. Oddly enough, the introduction to the song sounds like something out of a sci-fi movie!

Speaking of movies, it’s amazing to think how a soothing song like Les Baxter’s “Bird Of Paradise” could come from a man who’s scored several horror movies. Paul Page’s use of a steel guitar for “Castaway” will make many modern listeners think “SpongeBob SquarePants.” This is no mere coincidence, as the show is influenced by surf, Hawaiian and Tiki cultures. After all, Spongebob lives in a pineapple, Squidward dwells in a Tiki-style house and the music can speak for itself. The use of seagull cries also adds to the exotica effect of the song.

Martin Denny returns and teams up with Si Zentner to play “Tiki,” whose authoritative start and playful vibraphone notes reflect the status and mischievous nature of the legendary first man. Although the establishment described in Andy Williams’ “House Of Bamboo” is most likely not a Tiki bar, the lyrics do accurately describe the heavy use of bamboo in such bars. Besides, if this thin connection is good enough to include this great song on an exotica compilation, then it means I’m not too off-base for reviewing this for a horror site!

The Shadows’ “Kon-Tiki” is an exotica-tinged surf piece whose beat conjures up images of Thor Heyerdahl’s raft bobbing gently in the waves on its long journey. Marais and Miranda’s “I-Ha-She” is a musical tale of a native maiden rejecting the unwanted advances of her village’s ruler, which sounds like an excerpt from a long-lost Rankin Bass “Animagic” special set in the south seas. I especially liked the clever way they worked the chorus of men calling I-Ha-She’s name into the context of the story.

Next comes Buddy Morrow’s “Hawaiian Eye,” the theme song to the TV show of the same name. The accompanying notes detail the influence of Tiki culture on the show (as evidenced by the heavy use of animal calls in the opening) and vice versa. The Mary Kaye Trio’s “Hilo Boy” is a very corny song about a boy leaving his homeland in order to search the world for a bride (GUESS WHERE HE FINDS HER), but it does give Mr. Kirsten the opportunity to show their contribution to the birth of lounge music. Despite the band name, The Surfers’ “Ulili E” is not a surf song. Instead, it’s a traditional Hawaiian folk song (although not played in a way that one would associate with stereotypical folk songs).

Paul Page brings us more steel guitar goodness with “Pieces Of Eight,” a song from an album he sold at select Polynesian-themed restaurants. You see, he name each song on the album after a restaurant he had an agreement with and sold the record under a different title at each location. Naturally, the album was called “Pieces Of Eight” when it was sold at the establishment under that name. Despite the name, Eden Ahbez’s “Full Moon” has no horror ties. Instead it’s a hippie/hermit-style exotica, complete with croaking frogs. The Surfmen’s performance of “Bamboo” is marred by the hilariously awful fake bird calls that sound like someone puking (which is one of the main reasons it was included on the CD). Next comes a Don Ho twofer, wherein he adds lyrics to the theme from Hawaii 5-0 and “Quiet Village.” The final track is a series of “Luau Is Calling You” radio jingles for a Polynesian restaurant.

It may seem odd to review a CD with little to no horror-related content on this website, but it makes perfect sense to me. After all, we can’t have shadows without light. For example, Tiki masks come in a wide variety of designs. While a regular mask may or may not be interpreted as being scary, tiki masks like this leave no doubt as to the scare factor (but can also obscure what your average Tiki is really like). Also, many of the songs on the CD are also referenced in other albums that will be covered in future Freaky Tiki Surf-ari updates! Stay tuned!

Special thanks to Bear Family Records for the review copy!